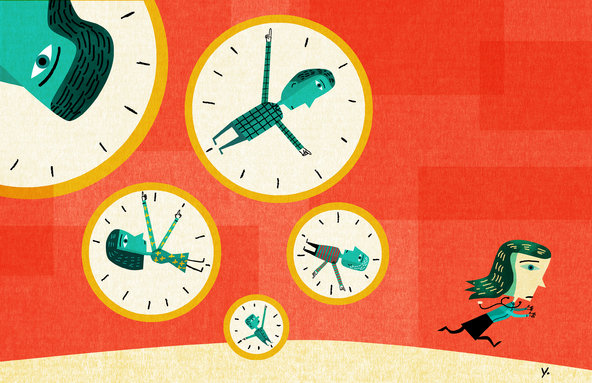 The minute I got on that bus, I knew I was in trouble. The driver sat at the stop just long enough to miss the green light. Then he inched along till he missed the next light and the one after that. He stopped at every stop even though not a soul was waiting.

The 20-minute trip to work stretched to a half-hour, then longer. I was late, late, late.

But this was a driver with a mission, clearly way ahead of schedule and trying to get back on track. He was very early; now I was very late. We were two people with competing, mutually exclusive agendas, and the one in the driver’s seat was bound to win.

A half-hour later, still sweating from racing the last five blocks on foot, with patients piling up in the waiting room, I became the one in the driver’s seat, with the mission and overriding agenda. Woe betide those with competing plans.

Just like that driver, I work under two mandates. One is professional: getting my passengers from point A to point B without breaking the law or killing anyone. The other one is less exalted but generally far more visible: I run according to a schedule that I ignore at my peril.

“She’s running late,” they mutter out in the waiting room. And indeed, she runs late for exactly the same reasons your bus runs late: too many slow-moving passengers lined up to board. Not enough buses or drivers. A person in a wheelchair requiring extra attention. Horrible traffic.

Not only does she often run late, but your poor driver — er, doctor — can run only so late before disaster ensues. She has obligations not only to you and your fellow passengers twitching in annoyance, but to a host of others, including the nursing and secretarial staffs and the cleaning crew at the end of the line. She can’t pull that bus in at midnight if everyone is supposed to leave by 7 p.m.

So when there is enough work to last till midnight, my agenda shifts, and not so subtly. Everyone can tell when I begin to speed. Every visit is pared down to the essentials. All optional and cosmetic issues are postponed, including most toenail problems and all paperwork. Chatting is minimized.

As a bus driver once said to me when I was foolish enough to start a conversation about his speed: “Lady, just get behind the white line and let me drive.”

Medicine is full of competing agendas. Even at the best of times, the match between the doctor’s and the patient’s is less than perfect, sometimes egregiously so. Some residents are now trained specifically in “agenda setting,” the art of successfully amalgamating all concerns.

But when it’s all about speed, an advanced skill set is required.

A patient has been waiting weeks for his appointment, anxiously rehearsing his lines. Bad luck that he showed up on a day I need him in and out in 19 minutes. He spends his first 18 unwisely, pretending everything is fine, making small talk, not quite mustering the courage to say what’s on his mind.

Then just as he is being ushered gently to the door, he pauses. “Oh, by the way …”

“Oh, by the way” is an infamous schedule buster. It means something bad: a suspicious lump, a sexually transmitted disease. Further, it is so common that an entire literature now addresses the “oh, by the way” phenomenon and how to tame it.

One favored tool is: “What else?” That question, asked by the doctor early in the visit, is intended to probe the patient’s agenda before it trumps the doctor’s.

As one set of researchers wrote: “The ‘what else?’ technique uncovers pertinent fears and anxieties up front and prevents an ‘oh, by the way, I have been having some chest pain’ from surfacing at the end of a visit.”

In other words: My agenda is to adopt your agenda, and then rework it so that I can drive on. Brutal, perhaps, but effective.

Very rarely do things work out for me the way they did for that driver who made me so late to work. Occasionally I have so much time that I can dawdle along the route.

I remember clearly the last time that happened. “How’s work?” I began. “What are you doing for exercise?” “Any hobbies?” “Your family, are they well?” I progressed rapidly through seatbelts, bike helmets, family medical history, end-of-life preferences — every single stop my bus typically has no time to make.

We were two people with competing, mutually exclusive agendas. But that time the one in the driver’s seat lost.