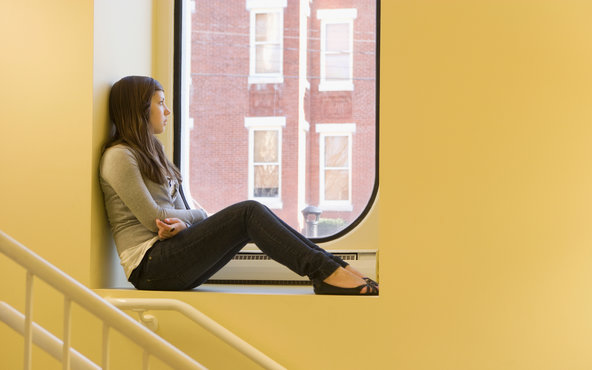 When girls come in for their physical exams, one of the questions I routinely ask is “Do you get your period?” I try to ask before I expect the answer to be yes, so that if a girl doesn’t seem to know about the changes of puberty that lie ahead, I can encourage her to talk about them with her mother, and offer to help answer questions. And I often point out that even those who have not yet embarked on puberty themselves are likely to have classmates who are going through these changes, so, again, it’s important to let kids know that their questions are welcome, and will be answered accurately.

But like everybody else who deals with girls, I’m aware that this means bringing up the topic when girls are pretty young. Puberty is now coming earlier for many girls, with bodies changing in the third and fourth grade, and there is a complicated discussion about the reasons, from obesity and family stress to chemicals in the environment that may disrupt the normal effects of hormones. I’m not going to try to delineate that discussion here — though it’s an important one — because I want to concentrate on the effect, rather than the cause, of reaching puberty early.

A large study published in May in the journal Pediatrics looked at a group of 8,327 children born in Hong Kong in April and May of 1997, for whom a great deal of health data has been collected. The researchers had access to the children’s health records, showing how their doctors had documented their physical maturity, according to what are known as the Tanner stages, for the standardized pediatric index of sexual maturation.

Before children enter puberty, we call it Tanner I; for girls, Tanner II is the beginning of breast development, while for boys, it’s the enlargement of the scrotum and testes and the reddening and changing of the scrotum skin. Boys and girls then progress through the intermediate changes to stage V, full physical maturity.

In this study, the researchers looked at the relationship between the age at which children moved from Tanner I to Tanner II — that is, the age at which the physical beginnings of puberty were noticed — and the likelihood of depression in those children when they were 12 to 15 years old, as detected on a screening questionnaire.

“What we found was the girls who had earlier breast development had a higher risk of depressive symptoms, or more depressive symptoms,” said Dr. C. Mary Schooling, an epidemiologist who is a professor at the City University of New York School of Public Health, and was the senior author on the study. “We didn’t see the same thing for boys.” Earlier onset of breast development in girls was associated with a higher risk of depression in early adolescence even after controlling for many other factors, including socioeconomic status, weight or parents’ marital status.

Other studies, including in the United States, have shown this same pattern, with girls who begin developing earlier than their peers vulnerable to depression in adolescence. Some studies have found this in boys, though it’s not as clear. But there is concern that girls whose development starts earlier than their peers are at risk in a number of ways, and across different cultural backgrounds.

“Early puberty is a challenge and a stress, and it’s associated with more than depression,” said Dr. Jane Mendle, a clinical psychologist in the department of human development at Cornell University. She named anxiety, disordered eating and self-injury as some of the risks for girls. In her studies of puberty, she has found associations between early development and depression in both genders in New York children. In boys, the tempo of puberty was significant, as well as the timing; boys who moved more rapidly from one Tanner stage to the next were at higher risk and the increased depression risk seemed to be related to changes in their peer relationships.

Before puberty, Dr. Mendle said, depression occurs at roughly the same rate in both sexes, but by the midpoint of puberty, girls are two and a half times more likely to be depressed than boys.

Some of these children may already be at risk; Dr. Mendle said that early puberty is more common in children who have grown up in circumstances of adversity, in poverty, in the foster care system. But some of it is heredity and some of it is body type and some of it, probably, is chance.

Researchers have wondered about hormonal associations with depression; Dr. Schooling pointed out that their study found that depression was associated with early breast development, controlled by estrogens, but not with early pubic hair development, controlled by androgens. “There is no physical factor that we know about that would explain this; estrogen has been eliminated as a driver of depression in earlier research,” she said in an email. “We probably need to explore social factors to seek an explanation.” They also plan to follow up with their study population at age 17.

The biological transition of puberty, of course, occurs in a social and cultural context. One very important effect of developing early, Dr. Mendle said, is that it changes the way that people treat you, from your peers to the adults in your life to strangers. “When kids navigate puberty they start to look different,” she said. “It can be hard for them to maintain friendships with kids who haven’t developed, and we also know that early maturing girls are more likely to be harassed and victimized by other kids in their grade.”

Parents should be aware of the difficulties that children may experience if they start puberty earlier than their peers, but lots of children handle early development with resiliency, and even pride.

Children who start puberty early – say, 8 instead of 12 — are faced with handling those physical changes while they are more childlike in their knowledge and their cognitive development, and in their emotional understanding of what goes on around them.

Parents should keep in mind that the same protective factors that help children navigate other challenges of growing up are helpful here: All children do better when they have good relationships with their parents, and when they feel connected at school. And we should be talking about the changes to their bodies before they happen, and make it clear that all of these topics are open for discussion.