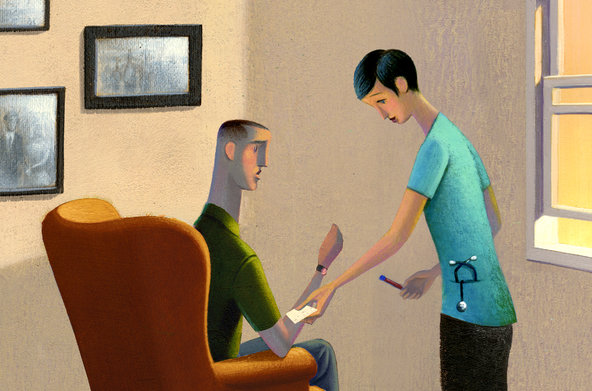 Two years ago, Kristi Wood was tired and achy and could not think clearly, and she had no idea why.

“I was in a fog and feeling awful,” said Ms. Wood, 49, who lives in Seattle and is an owner of a hiking supply company.

Ms. Wood had her blood tested by a consumer service called InsideTracker, which analyzes 30 hormones and biomarkers, such as vitamin levels, cholesterol and inflammation. After the service told Ms. Wood she had excessive levels of vitamin D, she cut back on a supplement she had been using and said she almost immediately felt better.

Now she has her blood drawn and tested by InsideTracker every four months to check everything from her blood sugar to her B12 levels which, she said, “allows me to be proactive” about her health. The services typically send their customers to a nearby clinic where they can have a vial of their blood drawn and sent for analyses. But InsideTracker also offers customers the option to have nurses show up at their home and draw blood. (Such services are different from another blood testing company that has been much in the news, Theranos, which aims to provide laboratory test results from a single finger prick.)

Home testing services like InsideTracker say they are empowering consumers, allowing them to spot metabolic red flags before they progress to disease. But critics say the services often lack proper medical oversight and convince healthy people that they’re sick, leading to unnecessary testing and treatment.

Those concerns have not stopped people from seeking home testing. The market for direct-to-consumer laboratory tests was valued at $131 million last year, up from $15 million in 2010,according to Kalorama Information, a pharmaceutical-industry research firm.

In December, New York Attorney General Eric T. Schneiderman accused two companies, DirectLabs and LabCorp, of violating a state law that requires laboratory tests to be carried out at the request of licensed medical practitioners.

DirectLabs had sold hundreds of health tests to consumers, ranging from checks for heavy metals and vitamins to screening for parasites and disease. But Mr. Schneiderman said the person fulfilling the medical practitioner role was actually a chiropractor who had never met, spoken to or followed up with any patients.

DirectLabs did not respond to a request for comment. DirectLabs and LabCorp agreed to pay fines, and DirectLabs ceased operating in New York. In a statement, Mr. Schneiderman said that allowing consumers to be tested for serious medical conditions without consulting a physician put “their health in jeopardy.”

Advocates of home testing, however, say such cases do not reflect industry practices. InsideTracker and another leading company, WellnessFX, said they worked with doctors who reviewed all test results.

Paul Jacobson, the chief executive of WellnessFX, based in San Francisco, said the company complied with all regulations and offered customers the option of consulting with a doctor, nutritionist or registered dietitian to discuss their results.

WellnessFX sells packages ranging from $78 to $988, offering analyses of 25 to 88 blood biomarkers, including vitamins, lipids, cardiovascular markers and thyroid and reproductive hormones. Depending on the results, the company also suggests supplements, foods and exercise.

Tara Boening, the dietitian for the Houston Rockets of the National Basketball Association, said the team started using InsideTracker this season. The players look at their reports (deficiencies are highlighted in red), which include suggested corrective actions such as eating more red meat and leafy greens if they are low in iron. The players “have been really receptive” to the information, Ms. Boening said.

But some doctors say that there is no evidence that such monitoring makes a meaningful improvement in health. Dr. Pieter Cohen, an assistant professor at Harvard Medical School and an internist at Cambridge Health Alliance, cautioned that the levels of vitamin D and other biomarkers that were optimal for one person might be very different from what is optimal for another person. He said InsideTracker’s lab reports, for example, classified vitamin D levels below 30 ng/mL as “low” — even though a level above 20 is perfectly normal and adequate for most people.

Dr. Cohen said his major concern with direct-to-consumer blood tests was that they screened for so many biomarkers and created seemingly arbitrary ranges for what is considered normal. Then they give people advice that they already know they should be following.

“The best-case scenario here is you lose your money and then you’re reminded to get more sleep and to eat more fruits, vegetables and fish,” he said. “The worst-case scenario is that you end up getting alarmed by supposedly abnormal results that are actually completely normal for you.”

“We decided, let’s try to do that for humans,” Dr. Blander said. “We can help you find a small issue today that might be a big problem in the future.”

Some, like Joseph Roberts, say the services are life-changing. Four years ago, Mr. Roberts a former Army Ranger and a retired master sergeant, was plagued by fatigue, depression and weight gain despite frequent exercise. Mr. Roberts, then 39, said doctors told him his symptoms were a normal part of aging.

Eventually, he decided to have his blood tested with InsideTracker, and the results surprised him, he said. He was told he had low testosterone and vitamin D, as well as excessive levels of vitamin B12.

Mr. Roberts cut back on daily energy drinks, which are loaded with B12. He also saw a doctor to discuss his testosterone levels. He learned his low levels were linked to a brain injury he had sustained as a result of a roadside bomb explosion in Iraq in 2003. He began testosterone-replacement therapy and now regularly checks in with a doctor. He also has his blood tested with InsideTracker every four months.

“I’ve had a huge improvement in my quality of life,” he said. “It’s money well spent.”