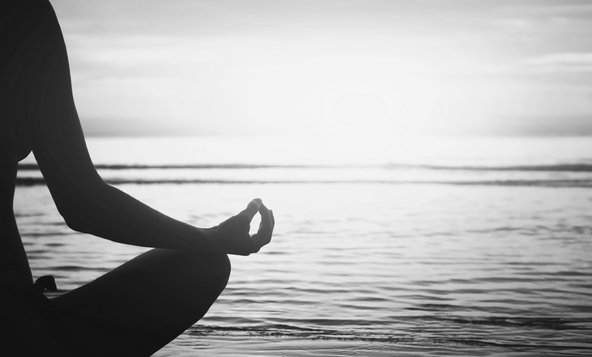 Meditating before running could change the brain in ways that are more beneficial for mental health than practicing either of those activities alone, according to an interesting study of a new treatment program for people with depression.

As many people know from experience, depression is characterized in part by an inability to stop dwelling on gloomy thoughts and unhappy memories from the past. Researchers suspect that this thinking pattern, known as rumination, may involve two areas of the brain in particular: the prefrontal cortex, a part of the brain that helps to control attention and focus, and the hippocampus, which is critical for learning and memory. In some studies, people with severe depression have been found to have a smaller hippocampus than people who are not depressed.

Interestingly, meditation and exercise affect those same portions of the brain, although in varying ways. In brain-scan studies, people who are long-term meditators, for instance, generally display different patterns of brain-cell communication in their prefrontal cortex during cognitive tests than people who don’t meditate. Those differences are believed to indicate that the meditators possess a more honed ability to focus and concentrate.

Meanwhile, according to animal studies, aerobic exercise substantially increases the production of new brain cells in the hippocampus.

Both meditation and exercise also have proven beneficial in the treatment of anxiety, depression and other mood disorders.

These various findings about exercise and meditation intrigued researchers at Rutgers University in New Brunswick, N.J., who began to wonder whether, since meditation and exercise on their own improve moods, combining the two might intensify the impacts of each.

So, for the new study, which was published last month in Translational Psychiatry, the scientists recruited 52 men and women, 22 of whom had been given diagnoses of depression. The researchers confirmed that diagnosis with their own tests and then asked all of the volunteers to complete a computerized test of their ability to focus while sensors measured electrical signals in their brains.

The researchers found that the depressed volunteers showed signaling patterns in their prefrontal cortex that are associated with poor concentration and focus.

Then the researchers had all of the volunteers begin a fairly rigorous, supervised program of sitting, followed by sweating.

To start, the volunteers were taught a form of meditation known as focused attention. Essentially entry-level mindfulness meditation, it requires people to sit quietly and think about their respiration by counting their breaths up to 10 and then backward. This practice is not easy, especially at first.

“If people found their thoughts wandering” during the meditation, and especially if they began to ruminate on unpleasant memories, they were told not to worry or judge themselves, “but just to start counting again from one,” said Brandon Alderman, a professor of exercise science at Rutgers who led the study.

The volunteers meditated in this way for 20 minutes, then stood and undertook 10 minutes of walking meditation, in which they paid close attention to each footfall.

Then they clambered onto treadmills or stationary bicycles at the lab and jogged or pedaled at a moderate pace for 30 minutes (with five minutes of warming up and five minutes of cooling down).

The volunteers completed these sessions twice a week for eight weeks. Then the researchers retested their moods and their ability to focus and concentrate.

There were significant changes. The 22 volunteers with depression now had a 40 percent reduction in symptoms of the condition. They reported, in particular, much less inclination to ruminate over bad memories.

Meanwhile, the members of the healthy control group also reported feeling happier than they had at the start of the study.

Objectively, the volunteers’ results on the computerized tests of their ability to focus and their brain activity also were different. The group with depression now showed brain cell activity in their prefrontal cortex that was almost identical to that of the people without depression. They could concentrate much better and hone their attention, attributes that are believed to help reduce stubborn rumination.

“I was quite surprised that we saw such a robust effect after only eight weeks,” Dr. Alderman said.

He and his colleagues theorize that the meditation and exercise may have produced synergistic effects on the brains of their volunteers.

“We know from animal studies that effortful learning, such as is involved in learning how to meditate, encourages new neurons to mature” in the hippocampus, he said.

So while the exercise most likely increased the number of new brain cells in each volunteer’s hippocampus, Dr. Alderman said, the meditation may have helped to keep more of those neurons alive and functioning than if people had not meditated.

Meditation also may have made the exercise more tolerable, he said, since some studies indicate that being mindful of your breathing and your body during workouts increases people’s enjoyment of the exertion.

Of course, this was a small study and the scientists did not follow their volunteers long term, so they do not know if any mood improvements linger. They also have no idea whether similar or even greater benefits might occur if someone were to run and then meditate or to practice both activities but on alternating days. They plan to study those questions in future experiments.