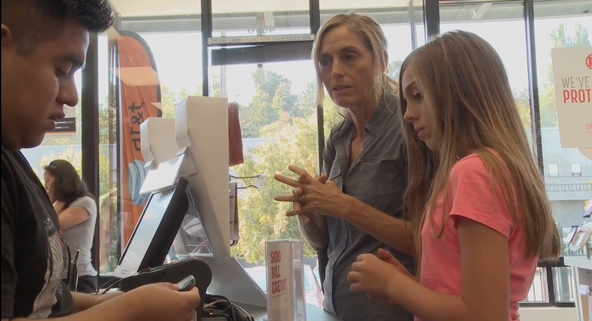 In a scene from the film “Screenagers,” Dr. Delaney Ruston buys her daughter, Tessa, her first smartphone.Credit

In the new documentary “Screenagers,” children can’t resist the pull of electronic devices, and parents don’t know what to do about it.

The average child in America spends more time consuming electronic media than going to school, with many teenagers going online “almost constantly.” And parents aren’t necessarily being good role models. A British study showed that while six in 10 parents worried that their children spend too much time in front of a screen, seven in 10 children worry that their parents are the ones who are plugged in and tuned out.

Dr. Delaney Ruston, the director of “Screenagers” and a physician serving as filmmaker in residence at Stony Brook Medicine in New York, says that screen time remains a topic that’s often contentious and downright confusing. I spoke with Dr. Ruston about her own family’s messy struggles with digital distractions, and about the surprising insights she learned making this film. Here’s an edited version of our conversation.

Where did the idea for this documentary come from?

When I started the film, I was a mom having a hard time with my own teenage kids. My 14-year-old son wanted to play more video games, and my 12-year-old daughter was always on social media. I was at a loss. I would suddenly get mad and then feel guilty. I realized speaking with other parents that we all felt paralyzed about our kids and screen overload and that it’s only getting worse.

At the same time, I was seeing more of this issue with my patients. As a primary care doctor, I saw more and more kids of all ages and backgrounds glued to a screen. I felt a real need to understand the science around screen time and kids. And as a filmmaker who has worked on other movies for social change, I wanted to share my journey in order to help others who are struggling with these issues as well.

What’s the impact of modern technology on our children’s brains?

Excessive use of screens could harm the physical development of young people’s brains. Studies show a correlation between too much screen time and worse attention spans, as well as negative effects on learning. We talk about two really important studies in the the film, one with mice and another with preschoolers.

In the first study, scientists found that when young mice are repeatedly exposed to flashing sounds and lights that mimic screen time, they develop fewer nerve cells in the parts of the brain that control learning and memory. The same stimulus doesn’t affect brains of adult mice. There’s something unique about the way screen time impacts the developing brain.

In the other study with preschoolers, researchers divided 60 kids into two groups. Half watched fast-paced images on screens for about 10 minutes, while the other half drew with crayons in another room. Then all the kids took the same test of cognitive skills. The kids who were exposed to the screens did significantly worse on the exams.

Our current fast-paced digital media, from flash games and online videos, to social media feeds and constant texting, seems to tire the brain. This has major implications for kids and how they reach their full academic potential.

The movie starts with your almost 13-year-old daughter trying to convince you she needs a smartphone. What’s the big lesson for other parents here?

I want every parent to know two main scientific facts: The first is that the part of the brain responsible for things such as planning, decision-making and impulse control (the frontal cortex) grows slowly over the teen years and is not fully developed until our 20s. The second is that screen time releases the chemical dopamine in the reward centers of the brain, and there is no other time in life when you’re as susceptible to that pleasure-producing chemical than in adolescence.

The worst thing a parent can do is hand over a smartphone and hope for the best. But parents often feel like trying to set limits is pointless, that the cat is out of the bag, tech is everywhere. I hear all kinds of excuses. But kids’ brains aren’t wired to self-regulate. They can’t do it without you, and they shouldn’t have to.

What should parents do then?

Given the right guidelines, kids can increase self-control over time. And that’s a more important indicator of success than even I.Q. I was really surprised, and you’ll see in the film, kids consistently told me that they want rules around their screen time.

So you have set guidelines. Two of our rules are: No phones in bedrooms at night, and no phone use in the car. We use alarm clocks and talk with each other instead. Those are the easy ones. For the rest of the “rules,” and what you’ll see after a few painful mistakes on my part in the film, is that it’s best to create a contract with your kids’ input.

It also helps if mom and dad aren’t checking their phone every five minutes.

That’s right. Kids don’t want to be held to a higher standard than their parents, and that’s a big issue. You can’t punish your kids for breaking the rules when you can’t put your own devices down. Also, don’t make rules that don’t make sense, and remember that humans respond better to reward than punishment.

Speaking of punishment, there’s a part in the movie where a parent is scared of taking away video games because of the huge fights it causes.

Whenever we try to enforce a screen limit there can be a tremendous backlash. Knowing the science behind this behavior helps to understand why kids respond so fiercely in the heat of the moment.

The dopamine we get from screen time is the same chemical released with activities such as drinking alcohol. The many hours of dopamine released with screen-based activities can affect the brain in serious ways. For example, research shows that those who play a lot of video games — about three hours a day — have M.R.I. brain scans that reveal similar patterns as people addicted to drugs.

You don’t sugarcoat the potential for disaster here.

On any given day, 70 percent of boys are playing video games, and they play close to 2.5 hours a day, seven days a week, 52 weeks a year.

Eighty percent of video games have violent content. With these games, the data shows an increased risk in aggressive thoughts and actions. It is not surprising that these games are not increasing thoughts of empathy and generosity — the traits that I would hope as a society we would want to promote.

The good news is that data also reveals that prosocial video games increase the chance that kids will be more helpful to others. Those are the games where you work to help someone, build a community or collaborate with others in a positive way. I just wish the industry would develop more “cool” prosocial games.

What do you hope happens now that the film is out and people are talking about it?

I want to spark a movement to get everyone, from parents to policymakers, to watch the movie, then have a “town hall” style conversation afterward about how we can best help kids lead more balanced lives. I see this as the first step.