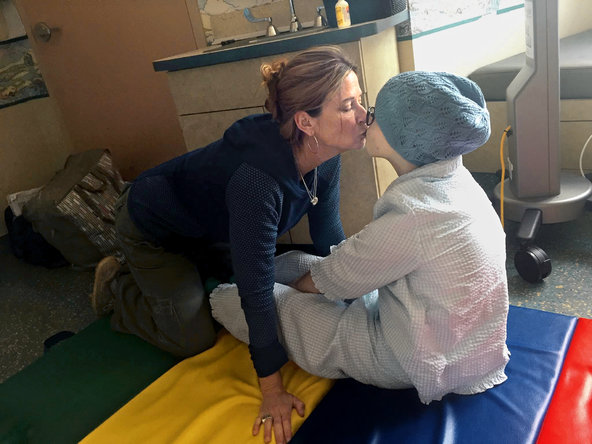 Credit The author with her daughter, Devon.

“I’m so jealous. You’ve lost so much weight, you look amazing,” a friend says to me. “I’d love to catch the stomach bug this year and lose a few pounds myself.”

I smile. I don’t know what to say.

Since January, one of my 12-year-old twin daughters, Devon, has been in isolation in a Boise, Idaho, pediatric oncology unit receiving chemotherapy for acute myeloid leukemia. Her sister, Gracie, remains behind, in a little town south of Sun Valley. To cope, she has assigned herself as captain of Devo’s Fight Club, a band of peer supporters started with a sweatshirt she designed in the first 36 hours of her sister’s diagnosis.

Their dad and I have been driving the two and a half hours between home and hospital, splitting the week between our daughters, our jobs, middle school’s demands, puberty’s capriciousness, sports, music and running a household that includes cats, dogs, horses, cows and fish.

Devon’s cancer was as random as a dice roll. She had swollen gums for a week and then, a simple blood test to rule out mono instead declared that this sleek, athletic, freckle-faced cowgirl had a rare and often fatal leukemia.

My husband says he has gained weight since Devon’s diagnosis. I have lost weight. A lot. Neither one of us notices the other because we relate over phone or email mostly, and offer a country-style, four-finger half wave from the steering wheel as we blow past each other on the highway between towns.

Over the next 120-mile drive I am perplexed and obsessive.

“I’m so jealous. You look amazing.”

I’m nearly 51 years old and was prepared for the idea that menopause would keep me round despite my best efforts. How much weight have I lost? Was I really that fat before? Should I eat before I get to the hospital or after? The smell of food makes Devon sick. Eating in front of her seems torturous and unfair.

After I arrived at the hospital, a friend stopped by to visit. Before acknowledging Devon, she looked at me. With purrs of envy, she commented on how thin I looked. Again, I was at a loss for words. My daughter was not.

“My mom is not skinny because she worked at it,” Devon told our visitor. “It’s because I’m sick.”

The friend waved it off in the way that one deflects praise of a nice outfit with “this old thing,” and we all moved on. But every time someone notices my weight loss with a tinge of envy it makes me cringe.

Please, I want to tell them, do not admire how thin I have become since my daughter’s diagnosis — unless you are suggesting I look undernourished and want to give me a cupcake. My weight loss is not a goal you should aspire to, nor should it be confused with health and well-being. I was perfectly happy and fit in my pre-cancer-kid size, and a little hurt to hear that this shrinkage that could cost me a lot more than new pants makes me more beautiful than ever.

But what is most painful for me is the collateral damage to my daughters. When they hear that Mom is enviably thin, they hear that this is a reward, a take away for the suffering. That thin is best no matter the circumstances.

Gracie, a minute ahead of her twin, but always an inch and a pound behind, is now getting stretch marks from growing so fast. When her peers note how she “swims” in her choir dress, her mind begins the dance with body consciousness. Weight fluctuations are somewhat inevitable in adolescence and during menopause, but certainly magnified under the circumstances.

Devon’s physical changes are pushed to the bottom of most people’s thoughts now, because in this setting of a hospital room, she’s supposed to look wan and pale. Instead, her inner beauty and sense of humor are noted.

I’ve been sick and thin enough times to know I don’t want to be either. But my girls are facing this for the first time, and the ripple effects of this entire traumatic episode will surface the farther we get from the cancer. Hospital social workers are preparing us to watch for anxiety, regression, depression, eating disorders, apathy and sleeping issues. And signs of cancer returning, of course. And survivor’s guilt in Gracie, which could carve out a whole new emotional journey.

Devon, thankfully, is home now. But I’ve just been told that five months in the hospital have cost Devon nearly a third of her body mass. That her overall strength is that of a 90-year-old, and that after the chemo, her heart, which once pounded fearlessly, is in danger of failing. Her brain is wobbly from the lack of nutrition and her skin is translucent and cold where it once was earthy and warm.

When she returns to school next year, navigating the social riddle of middle school — now half a year behind her peers — and still mostly bald, and undoubtedly still thin, she will return with a self-consciousness she has never known.

Do not covet her thinness. Admire her resilience, and tenacity, and sheer will to live.

And, if you look into her eyes and you can see they are dim from the struggle, a happy-to-see-you smile or just saying nothing at all will do more than you know to help her find her way to loving herself as life has created her in this moment.

If you want to know how someone is, look in their eyes, because their size is not where the information is.