This post was originally published on this site
Video

Battling P.T.S.D., One Mile at a Time

William Alvarez has struggled with depression and post-traumatic stress disorder since losing his legs during the war in Vietnam. His recent interest in hand cycling has helped him cope.

You would be forgiven if, one of these afternoons in Central Park, you failed to notice a cyclist named William Alvarez. He’s easily lost amid the whirl of riders and runners, and of course there is the matter of his considerable velocity, 12.5 miles per hour on average.

When he stops, though, for a drink of water or a red light, a few of his trademarks come into focus. First is the fact that Mr. Alvarez is not riding a bike, but a three-wheeled recumbent handcycle. Next you might notice the trio of flags flapping behind him in the wind: one for the United States, one for the United States Army and one for prisoners of war. And then there is the oversize sack strapped to the rear of his cycle, where he stashes a pair of beige-colored carbon fiber legs.

Though Mr. Alvarez rides with the commitment of a lifelong devotee, this routine once seemed unimaginable. As a soldier during the war in Vietnam, Mr. Alvarez, now 71, lost both his legs in a land mine explosion, an episode that set off decades of severe depression and post-traumatic stress disorder.

Last year, however, Mr. Alvarez resolved to break the cycle of solitude and torment that had consumed him for half a century. Handcycling, he says, has provided him with a newfound resilience and autonomy. These days he rides at least five times a week, typically 20 to 30 miles a trip, as he trains to compete in the New York City Marathon this fall.

“When I’m riding, it’s like I’m finally free,” he said. “I can forget about all of my problems and just feel the breeze on my face. Nothing else matters.” 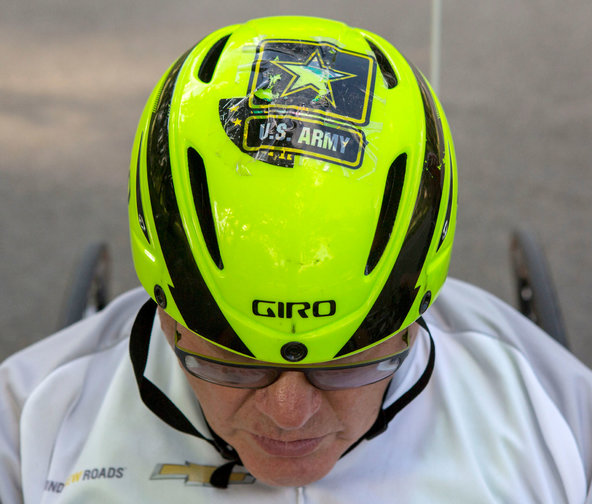 As a young man, Mr. Alvarez had hoped that the United States Army would afford him the sense of purpose and belonging that had eluded him in childhood.Credit Hiroko Masuike/The New York Times

As a young man, Mr. Alvarez hoped that the Army would afford him the sense of purpose and belonging that had eluded him in childhood. After his parents divorced when he was 6, he lived in a series of foster homes in the South Bronx, often separated from his three older siblings. “There wasn’t a lot of care, so I just learned to make it on my own,” Mr. Alvarez said.

In 1969, spurred by his anti-Communist convictions and by foster parents who had fought in the Korean War, Mr. Alvarez journeyed to 39 Whitehall Street in Manhattan for his induction. “I felt a sense of responsibility,” he said. “Lots of people went to Canada, but that never crossed my mind.”

In Vietnam, Mr. Alvarez watched countless soldiers lose their lives or their limbs. Early one morning in 1972 he was on patrol with the 101st Airborne Division. As the soldiers passed through the jungle, Mr. Alvarez tripped a land mine.

When he came to hours later, at a MASH unit, a chaplain was hovering above, administering the last rites. Mr. Alvarez somehow survived, but he emerged from the hospital 13 months later to a different world. Support for the war and its veterans had dwindled in the United States, and former soldiers were even under attack. Mr. Alvarez, who used a wheelchair, was disparaged and called a killer. It took him decades, he said, to get the services he needed.

Mr. Alvarez tried to rebuild his life. He married a woman he had known before the war, and they took off across the country, seeking adventure. But the trauma of war haunted him, he said; as he withdrew into depression, his marriage fell apart. One day in California, while riding a Vespa scooter from Santa Cruz to San Jose, he deliberately veered off the side of the road into a ravine. He would try suicide two more times.

“My mind was just going to war with itself,” he said. “Every day was another battle and I couldn’t find joy in anything.”

Mr. Alvarez eventually managed to subdue his suicidal thoughts, but his post-traumatic stress disorder left him reclusive and unable to keep a steady job, he said. For years, fellow veterans urged him to try cycling, insisting on the sport’s therapeutic virtues.

Last May, Mr. Alvarez finally relented at an event in Central Park co-hosted by Achilles International, an organization that runs athletic programs for people with disabilities, and theV.A. Adaptive Sports Program, which is run by the Department of Veterans Affairs. He climbed onto the seat of a cycle and set off.

“I said to myself, O.K., this is it,” Mr. Alvarez recalled. “It was fun. Imagine that. I hadn’t felt that emotion in a long time.” 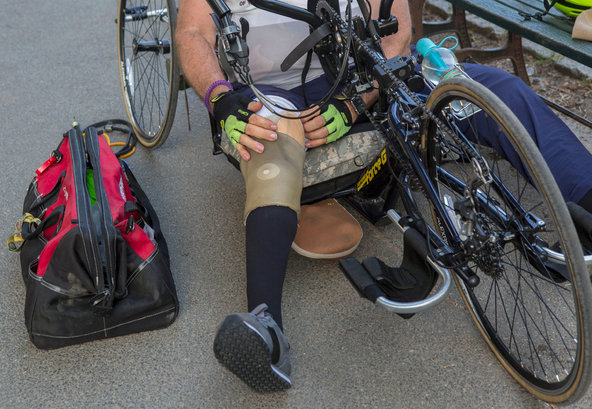 Several studies have shown that exercise can help those with PTSD. The endorphins released during intense physical activity, the focus on coordination and the skills gained often serve as an antidote to the depression, sleeplessness, anger and suicidal tendencies associated with the condition.

“We’ve been getting amazing feedback from the veterans,” said Jonathan Glasberg, 49, the coordinator of the Adaptive Sports Program. “There’s the physical component, of course, but people are also just happier.”

More than 200 veterans are currently taking part in the Adaptive Sports Program in New York, which offers golfing in Mosholu Parkway in the Bronx, fencing in Chelsea and sailing on the Hudson River. Participation has more than doubled in the last two years alone, Mr. Glasberg said.

In the months since Mr. Alvarez started training, his body has begun to change, he said. He has shed 15 pounds, his hands have calluses and newly formed muscles swell from his shoulders. The most dramatic metamorphosis, though, has taken place in his psyche.

“My whole body chemistry changed,” he said. “Everything started working the way it’s supposed to. I’m more sociable than I was before, not as depressed, and I’ve got a new sense of energy.”

Mr. Alvarez has not banished all of his demons. He still endures streaks of depression, and just the other week he suffered a vivid flashback, he said. Now, though, when he feels the memories closing in, he reaches out to friends or goes out for a ride on his own.

Last month, Mr. Glasberg was pleasantly surprised when he called Mr. Alvarez to check in. “He told me, ‘Sorry I can’t chat, I’m meeting some friends under the Brooklyn Bridge,’” Mr. Glasberg recalled. “I was thinking: Is this really the same guy?”

On a recent afternoon, Mr. Alvarez headed from his apartment on East 22nd Street to a nearby storage unit, where he exchanged his wheelchair for his handcycle, a sleek black model that he tends to with great care. From the storage facility, he often circles the entirety of Manhattan, but on this day he planned to meet up with a group of riders in Central Park. He greeted all warmly but soon peeled away to take the course at a faster pace.

As he steered his way up the sloping hills toward the northern end of the park, Mr. Alvarez began to pant from exhaustion, but he continued to churn away at a steady clip, refusing to succumb to gravity’s tug. Beyond the crest, he knew, he’d be gliding with ease.