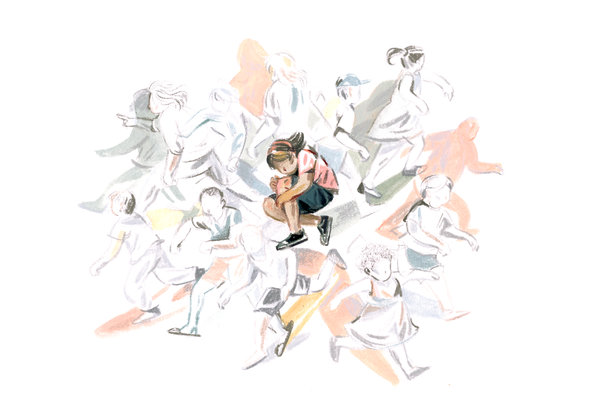 It began with a roller-skating accident three years ago. Taylor Aschenbrenner, then 8 years old, lost her balance amid a jumble of classmates, tumbled to the floor and felt someone else’s skate roll over her left foot. The searing pain hit her immediately.

The diagnosis, however, would take much longer. An X-ray, M.R.I.s, a CT scan and blood tests over several months revealed no evidence of a break, sprain or other significant problem. Taylor’s primary symptom was pain — so severe that she could not put weight on the foot.

“Our family doctor first told us to give it some time,” said Taylor’s mother, Jodi Aschenbrenner, of Hudson, Wis.

But time didn’t heal the pain. After about a month, an orthopedist recommended physical therapy. That didn’t end the problem, either. “I couldn’t walk or play outside or do anything,” Taylor said.

After she had spent a year and a half on crutches, her orthopedist suggested she see Stefan Friedrichsdorf, the medical director of pain medicine, palliative care and integrative medicine at Children’s Hospitals and Clinics of Minnesota. He and his team promptly recognized Taylor’s condition as complex regional pain syndrome, a misfiring within the peripheral and central nervous systems that causes pain signals to go into overdrive and stay turned on even after an initial injury or trauma has healed.

He came up with a treatment plan for Taylor that included cognitive behavioral therapy, physical therapy, mind-body techniques, stress-reduction strategies, topical pain-relief patches and a focus on returning to her normal life and sleep routine.

“That turned things around so fast, if I didn’t see it myself, I wouldn’t have believed it,” Mrs. Aschenbrenner said. “I thought, ‘finally, someone understands what this is, has experience with it, and knows how to fix it!’”

But why did it take so long for a child in unbearable pain to find relief? Experts say children’s pain is, for the most part, grossly underrecognized and undertreated.

“Unfortunately, in 2016 pain management in the United States and all Western countries is still abysmal,” said Dr. Friedrichsdorf, who noted that pediatric pain receives the least attention. “Data shows that adults with the same underlying condition will get two to three times as many pain medication doses as children.”

There are effective treatments. But pediatricians, specialists and even parents have been slow to turn to them because pain in children has long been misunderstood and medical training in pain management is scant. Veterinary schools require “at least five times more education on how to handle pain” than medical schools, Nora D. Volkow, the director of the National Institute on Drug Abuse, said..

As recently as the 1980s, babies would routinely undergo invasive medical procedures, including open-heart surgery, without anesthesia or analgesics because physicians believed that infants’ brains were not developed enough to feel the pain. And it was thought that even if babies did feel pain, it wouldn’t ultimately matter because they wouldn’t remember it later on.

The emphasis in Western medicine has traditionally been on “saving lives and executing medical procedures effectively, while pain has been pushed way down on the priority list,” said Christine Chambers, a professor of pediatrics, psychology, neuroscience and pain management at Dalhousie University in Halifax, Nova Scotia.

Many doctors and parents also fear that pain medications will have dangerous side effects, like developmental problems and addiction. But current scientific evidence supports a different conclusion.

“Research shows that poorly managed pain exposures early in life can actually change the wiring in the brain and prime children to be more sensitive to it later on, putting them at risk for developing chronic pain in childhood and adulthood,” said Anna C. Wilson, a child psychologist and assistant professor of anesthesiology at the Pediatric Pain Management Center at Oregon Health & Science University. And while babies or young children may not consciously remember it, their nervous systems will.

There is, however, reason for optimism. Contrary to previous conventional thinking, the effective use of pain medication for children does not hinder brain development, according to several studies.

Research has also shown that the appropriate medical use of prescription pain medications, such as opioids, when properly monitored, does not lead to addiction in young children and adolescents, Dr. Friedrichsdorf said.

A host of other behavioral interventions have been shown to prevent and treat pain as well. Pain experts say these can and should be used even during seemingly minor medical procedures, such as vaccinations. Parents can hold their children during the procedure, breast-feed or give them a sweet solution to suck on, distract them with a song or breathing exercises, and use a topical numbing cream.

One recent study also found that a parent’s behavior and approach to their children’s vaccinations can affect a child’s response to needles.

“That vaccination at age 5 might not seem like a big deal to you, but if it goes wrong and causes a lot of pain, then the child becomes fearful,” Dr. Chambers said, which can perpetuate a cycle of fear and pain over medical care.

“One of the best ways to address the epidemic of chronic pain in this country is to stop it before it starts,” Dr. Wilson at Oregon Health & Science University said.

“If we could reduce painful experiences and problems in childhood, we might be able to reduce chronic pain in the next generation.”