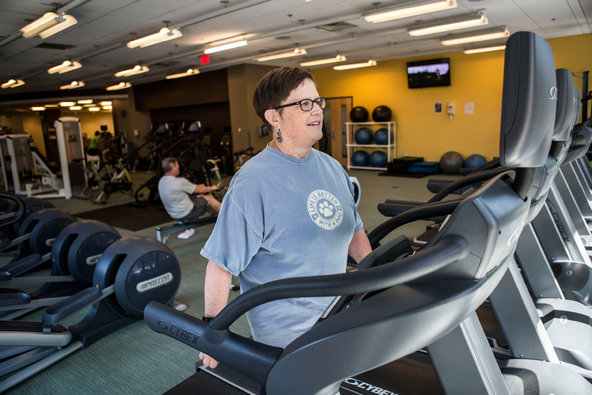 Linda Guinee, 60, a survivor of breast cancer, particpated in an earlier trial to see if weight-loss could improve her outcome. She lost 15 pounds and increase her physical activity.Credit Shiho Fukada for The New York Times

Should weight loss be prescribed as a treatment for breast cancer?

Scientists are recruiting thousands of women for a large clinical trial to find out. The plan is to put heavy women age 18 and older who were recently given diagnoses of breast cancer on diets to see if losing weight will keep their cancer from coming back.

“We have been telling women to do this for years, but we don’t really have definitive proof,” said Dr. Jennifer Ligibel, the principal investigator of the Breast Cancer Weight Loss study, who is a breast oncologist in the Susan F. Smith Center for Women’s Cancers at Dana-Farber Cancer Institute in Boston.

“If it shows that losing weight by increasing physical activity and reducing calories improves survival, weight loss and physical activity could become a standard part of treatment for millions of breast cancer patients around the world,” Dr. Ligibel said.

In a sense, the clinical trial is long overdue. Once a woman is given a breast cancer diagnosis, obesity is associated with a higher risk for recurrence and lower likelihood of survival in women of all ages, Dr. Ligibel said.

Studies showing that obese and overweight women are more likely to die of their breast cancer date back decades. Just two years ago, a meta-analysis crunched the numbers from more than 80 studies involving more than 200,000 women with breast cancer, and reported that women who were obese when diagnosed had a 41 percent greater risk of death, while women who were overweight but whose body mass index was under 30 had a 7 percent greater risk.

But while those studies showed an association between weight and breast cancer mortality, they weren’t designed to find out if weight loss after diagnosis improves survival or reduces the chance of a recurrence.

“Nobody understands biologically why that is,” Dr. Ligibel said, adding that researchers will be collecting blood samples throughout the trial to track metabolic changes that occur with weight loss. Exercise is also part of the program, and participants will work with health coaches. Fitbit is donating all the products that will be used to track their activity and weight.

The researchers will look at markers of inflammation and metabolism, including levels of insulin, insulinlike growth factor and hormones that regulate fat storage.

“There’s a physiology of obesity that happens in everybody, but many of the changes we see in obesity actually are factors that influence the growth of cancer,” said Dr. Pamela Goodwin, one of the study’s investigators and a professor of medicine at Mount Sinai Hospital in Toronto.

These changes include higher insulin and glucose levels, inflammation and an increase in certain proteins, all of which appear to fuel cancer growth, Dr. Goodwin said.

Obesity “makes a great environment for cancer to get a foothold and progress,” said Barbara Gower, a professor of nutrition at the University of Alabama at Birmingham, who is running a small short-term trial to see what happens when women with ovarian cancer remove all sugar and starches from their diet. “The hormonal messages getting through to cancer cells are that it’s a good time to grow, and the nutrition they need is there, too.”

While a drug may target one of the factors, Dr. Ligibel said, weight loss and exercise may be a more powerful intervention because they lead to a combination of changes. “You have something that can potentially change all of them to a metabolically healthy low inflammatory state,” Dr. Ligibel said.

The trial, which will get underway this summer, will cost an estimated $15 million to $20 million. It’s sponsored by the National Cancer Institute and the Alliance for Clinical Trials in Oncology.

Researchers are recruiting 3,200 women from across the United States and Canada who have a recent diagnosis of Stage 2 or Stage 3 breast cancer. Participants must be overweight, with a body mass index of at least 27, and have hormone receptor positive or triple negative tumors. (Women with another type of breast cancer, known as HER2-positive, will not be included because their prognosis does not appear to be associated with weight, researchers said.)

Participants must be 18 but there is no upper age limit, though they must be able to walk “a couple of city blocks and have a life expectancy of at least five years for other causes,” Dr. Ligibel said.

Volunteers will be randomly assigned to either a telephone-based weight loss program or to a control group for comparison. The goal for those in the intervention is to lose 10 percent of their body weight over two years. Participants will continue to be followed for 10 years to see whether their cancer progresses or not.

Weight loss is challenging, and some cancer treatments cause weight gain. But an earlier trial that tested a similar telephone-based weight loss intervention on a smaller scale found that women with breast cancer lost 4 to 5 percent of their body weight, Dr. Goodwin said.

“Breast cancer is a teachable moment,” she added.

The new trial might help doctors identify which patients will benefit most from losing weight, and whether even moderate weight loss is helpful, said Dr. Clifford Hudis, the new chief executive officer of the American Society of Clinical Oncology and former chief of Memorial Sloan Kettering Cancer Center’s breast medicine service, who was involved in the design of the Breast Cancer Weight Loss trial.

“If I tell patients they need to lose 20 pounds, they just roll their eyes and say it’s impossible,” Dr. Hudis said. “But if we could say they only need to lose 3 percent of their body weight, that wouldn’t be so scary. That’s more manageable.”