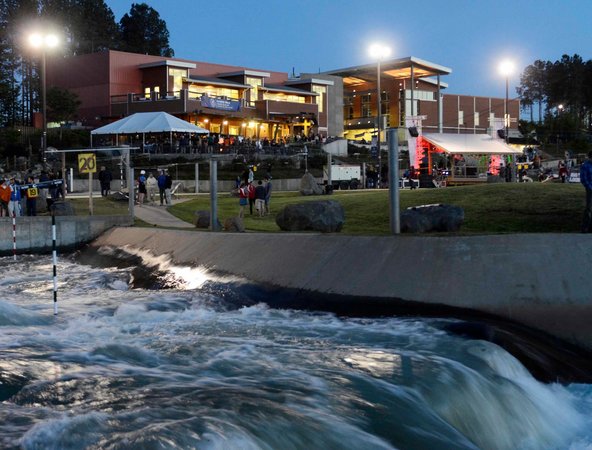 Water rushes along the course at the National Whitewater Center at dusk. The chlorination and filtration systems at the artificial water rapids course were inadequate to kill a rare, brain-attacking organism this summer.Credit Robert Lahser/The Charlotte Observer, via Associated Press

I expected a bumpy ride on a whitewater trip, so when I fell off my raft and coughed up the water I’d inhaled, I wasn’t afraid. But at the time I didn’t know I was swimming with a deadly parasite.

I’d been at a bachelorette party at the U.S. National Whitewater Center in Charlotte, N.C., but after returning home I learned that I had shared the churning rapids with Naegleria fowleri, a single-celled amoeba found mostly in soil and warm freshwater lakes, rivers and hot springs. An Ohio teenager had contracted the amoeba infection after visiting the center around the same time I did, and some of the waters and sediment at and around the center had tested positive for the bug.

News that my friends and I had all been at risk of exposure triggered a few days of worry. The illness is rare and, if infected, symptoms show up between one and 10 days after exposure. Chances were that we were fine (we were), but the experience prompted me to learn more about the parasite.

Naegleria fowleri lives in fresh water, but not in salt water. If forced up the nose, it can enter the brain and feed on its tissue, resulting in an infection known as primary amebic meningoencephalitis. Death occurs in nearly all of those infected with the parasite, usually within five days after infection.

The 18-year-old Ohio woman who died most likely contracted the parasite when she sucked water through her nose after falling from a raft during a church trip.

Samples from a channel at the rafting center, collected by the Centers for Disease Control and Prevention, tested positive for the bug. The center’s channels are man-made, and it gets its water from the Charlotte-Mecklenburg Utilities Department and two wells on its property. The center has announced that it disinfects all water with ultraviolet radiation and chlorine, and it added more after the water tests.

Sediment from the nearby Catawba River, where visitors to the center can paddle board and kayak, also tested positive for the amoeba, although the actual water from the river did not test positive. Dr. Jennifer Cope, an epidemiologist at the C.D.C., said natural bodies of water might have their own ways of controlling the bug. The parasite possibly entered the artificial river through storm water runoff or people tracking it in on their shoes, said Dr. Cope.

Between the time of the young woman’s visit in early June and when the whitewater center voluntarily shut down its rafting activities a few weeks later, thousands of people could have been exposed to the parasite, but there were no additional reports of infections.

“The interesting thing about this infection is it’s almost always one single case that occurs in one location,” said Dr. Cope.

Experts say record-breaking temperatures that week may have enabled the presence of the bug, which thrives at warmer temperatures, and murky water possibly disrupted the effectiveness of the UV and chlorine disinfectant.

The amoeba is more frequently reported in southern states, especially Florida and Texas in the summer. However, after the C.D.C. received a report in Minnesota in 2010, they started tracking the bug to see how climate change might be influencing its habitat. Infections have also been documented in Kansas and Indiana. According to Dr. Cope, cases in Minnesota and other places have followed heat waves or a number of days where the temperature was above 90.

According to the C.D.C., since 1962 only 138 people have been infected, and all but three of them have died. Between 2006 and 2015, there were only 37 documented infections, mainly associated with recreational swimming, but one involved contaminated water on a slip-n-slide, and three cases were from rinsing sinuses with infected tap water, including two involving Neti pots.

Clearly, Naegleria fowleri is not your biggest risk in the water. By comparison, between 2005 and 2014, 3,536 people — which averages to about 10 a day — died of unintentional drownings in the United States.

“Millions of people participate in water activities all the time, and this is a very rare infection,” Dr. Stephen Keener, the medical director for the Mecklenburg County Health Department, said at a press conference. “It’s not the kind of thing where just getting in the water with Naegleria is going to cause you to get sick.”

There are ways to reduce exposure, and even though the risk of infection is low, you should follow them. Avoid putting your head under water in hot springs or other warm, fresh bodies of water. If you do go under water, hold your nose, or use nose clips if you know there is a risk of submersion. Avoid digging scum and sediment up near the water. Avoid fresh water activities during very warm weather, which is not very practical advice for people who enjoy swimming or water skiing in lakes or kayaking in streams and rivers. But you can remind yourself about precautions, especially after several days of 90 degree weather.

“Living in Arkansas, one of my favorite things to do is spend time at the lake,” said Dr. William Matthew Linam, a physician at Arkansas Children’s Hospital, in an email. “Having said that, I make my children hold their noses if they are going underwater.”

If you’ve been playing around in warm fresh water, especially during summer months, and come down with a headache, fever, nausea or vomiting, experts say to tell your doctor where you’ve been. And the sooner the better. Later symptoms include stiff neck, confusion, loss of balance, seizures and hallucinations.

Dr. Linam thinks early detection is critical. In 2013 he saved a 12-year-old girl named Kali Hardig, who was exposed at an Arkansas water park and is one of only three documented victims of the amoeba to ever survive the infection. He called the C.D.C. immediately, and the amoeba was found in a sample of her spinal fluid. He administered a cocktail of drugs that the C.D.C. has proven effective in the lab, including miltefosine, a breast cancer drug that the C.D.C. is working to make available in hospitals in Texas and Florida, where reports are more common.

But “even with early detection and treatment, survival is not guaranteed,” he said.

Would I go whitewater rafting again? Yes. But probably only on a cool day. And I’d wear nose plugs.