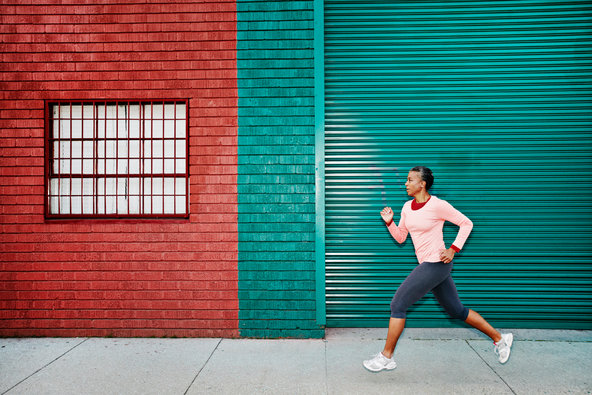 Hot flashes are a lamentable part of reaching middle age for many women. While drug treatments may provide relief, two new studies suggest that the right type of exercise might lessen both the frequency and discomfiting severity of hot flashes by changing how the body regulates its internal temperature.

As estrogen levels drop with the onset of menopause, many women become less adept, physiologically, at dealing with changes to internal and external temperatures. The result, famously, is the hot flash (also known as a hot flush), during which women can feel sudden, overwhelming heat and experience copious sweating, a problem that in some cases can linger for years.

So researchers at Liverpool John Moores University in England and other institutions recently began to consider whether exercise might help.

Endurance exercise, after all, improves the body’s ability to regulate temperature, the scientists knew. Athletes, especially those in strenuous sports like distance running and cycling, start to sweat at a lower body temperature than out-of-shape people. Athletes’ blood vessels also carry more blood to the skin surface to release unwanted heat, even when they aren’t exercising.

If exercise had a similar effect on older, out-of-shape women’s internal thermostats, the scientists speculated, it might also lessen the number or the intensity of their hot flashes.

Previous studies examining exercise as a treatment for hot flashes had shown mixed results, the scientists knew. However, many of those experiments had been short term and involved walking or similarly light exercise, which might be too gentle to cause the physiological changes needed to reduce hot flashes.

So for the two new studies, one of which was published in the Journal of Physiology and the other in Menopause (using the same data to examine different aspects of exercise and hot flashes), the researchers decided to look at the effects of slightly more strenuous workouts.

They first recruited 21 menopausal women who did not currently exercise but did experience hot flashes. According to diaries each woman kept for a week at the start of the study, some women were having 100 or more of them each week.

The scientists also measured each woman’s general health, fitness, blood flow to the brain (which affects heat responses) and, most elaborately, ability to respond to heat stress. For that test, researchers fitted the women with suits that almost completely covered their bodies. The suits contained tubes that could be filled with water. By raising the temperature of the water, the scientists could induce hot flashes — which typically occur if an affected woman’s skin grows hot — and also track her body’s general ability to deal with heat stress.

Fourteen of the women then began an exercise program, while seven, who served as controls, did not. (This was a small pilot study, and the researchers allowed the women to choose whether to exercise or not.)

The sessions, all of them supervised by trainers, at first consisted of 30 minutes of moderate jogging or bicycling three times a week. Gradually, the workouts became longer and more intense, until by the end of four months the women were jogging or pedaling four or five times per week for 45 minutes at a pace that definitely caused them to pant and sweat.

They also, in the last of those 16 weeks, kept another diary of their hot flashes.

Then they returned to the lab to repeat the original tests.

The results showed that the exercisers, unsurprisingly, were considerably more aerobically fit now, while the control group’s fitness was unchanged.

More striking, the women who had exercised showed much better ability to regulate their body heat. When they wore the suit filled with warm water, they began to sweat a little earlier and more heavily than they had before, showing that their bodies could generally dissipate heat better.

But at the same time, during an actual hot flash induced by the hot suit, the exercisers perspired less and showed a lower rise in skin temperature than the control group. Their hot flashes were less intense than those of the women who had not worked out.

Probably best of all from the standpoint of the volunteers who had exercised, they turned out to have experienced far fewer hot flashes near the end of the experiment, according to their diaries, with the average frequency declining by more than 60 percent.

These findings strongly suggest that “improvements in fitness with a regular exercise program will have potential benefits on hot flushes,” said Helen Jones, a professor of exercise science at Liverpool John Moores University, who oversaw the new studies.

Precisely how exercise might change a women’s susceptibility to hot flashes is still not completely clear, although the researchers noted that the women who exercised developed better blood flow to the surface of their skin and to their brains during heat stress. That heightened blood flow most likely aided the operations of portions of the brain that regulate body temperature, Dr. Jones said.

The cautionary subtext of this study, though, is that to be effective against hot flashes, exercise probably needs to be sustained and somewhat strenuous, she said. “A leisurely walk for 30 minutes once a week is not going to have the required impact.”