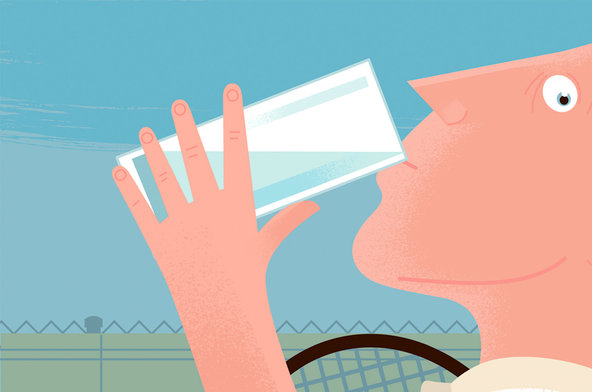 Truth to tell, sometimes I don’t follow my own advice, and when I suffer the consequences, I rediscover why I offer it. I’ve long recommended drinking plenty of water, perhaps a glass with every meal and another glass or two between meals. If not plain water, which is best, then coffee or tea without sugar (but not alcoholic or sugary drinks) will do.

I dined out recently after an especially active day that included about five miles of walking, 40 minutes of lap swimming and a 90-minute museum visit. I drank only half a glass of water and no other beverage with my meal.

It did seem odd that I had no need to use the facilities afterward, not even after a long trip home. But I didn’t focus on why until the next day when, after a fitful night, I awoke exhausted, did another long walk and swim, and cycled to an appointment four miles away. I arrived parched, begging for water. After downing about 12 ounces, I was a new person. I no longer felt like a lead balloon.

It seems mild dehydration was my problem, and the experience prompted me to take a closer look at the body’s need for water under a variety of circumstances.

Although millions of Americans carry water bottles wherever they go and beverage companies like Coke and Pepsi would have you believe that every life can be improved by the drinks they sell, the truth is serious dehydration is not common among ordinary healthy people. But there are exceptions, and they include people like me in the Medicare generation, athletes who participate in particularly challenging events like marathons, and infants and small children with serious diarrhea.

Let’s start with some facts. Water is the single most important substance we consume. You can survive for about two months without food, but you would die in about seven days without water. Water makes up about 75 percent of an infant’s weight and 55 percent of an older person’s weight.

Human cells simply don’t function without water, and the body has evolved a finely tuned, complex system for making sure it has the water it needs under a wide range of conditions. In most cases, thirst is a reliable signal that more water is needed. A main job of the kidneys is to excrete just enough water to keep cells properly hydrated. However, contrary to myth, dark urine does not necessarily mean you’re dehydrated. Urine can be discolored by foods like asparagus, blackberries and beets.

Another popular myth: To moisturize skin, prevent wrinkles and produce a glowing complexion, you need to drink eight glasses of water a day. Drinking extra water doesn’t improve skin in people who are otherwise well hydrated. Better to use an emollient moisturizer to counter dry skin.

Good hydration definitely protects against kidney stones, and there is evidence that it counters constipation and exercise-induced asthma. It may also help protect against vascular diseases, like stroke, an elevated heart rate or sudden drop in blood pressure and is especially important for people with diabetes.

Despite the vital importance of water, there are relatively few good studies of how much is needed, by whom and under what circumstances, according to Barry M. Popkin, a professor of nutrition at the University of North Carolina at Chapel Hill. “We do not truly understand how hydration affects health and well-being, even the impact of water intakes on chronic diseases,” he and his colleagues wrote in Nutrition Reviews.

“Nearly all the funding of water research has been provided by industry,” Dr. Popkin said in an interview, referring to companies that sell all manner of beverages, including bottled water. “And most of the research on water has been organ-specific, done by people studying the kidneys or lungs. Whole body systems haven’t been well studied.”

There are no formal guidelines on how much water people need each day. The amount is affected by what people eat, their weight and activity level and even the environment in which they live.

The Institute of Medicine, which issues recommendations on the amounts of nutrients we need, states that an “adequate intake” of water ranges from 700 milliliters (about three cups) a day for newborns to 3.8 liters (16 cups) for lactating women. Still, the institute concluded that “individuals can be adequately hydrated at levels below as well as above the adequate intakes provided.”

Furthermore, the institute stated that all kinds of liquids can contribute to a person’s total water needs, including beverages like tea, coffee, juices, sodas and drinking water, as well as the moisture contained in foods like fruits, vegetables, soups and even meats. In fact, the institute estimates that the moisture in food accounts for about 20 percent of a typical person’s water intake.

Although the institute included juices and sodas as potential sources of hydration, these often sugar-laden beverages have become a serious nutritional problem in recent decades. The entire increase in fluid intake in the United States, from 79 ounces a day in 1989 to 100 ounces in 2002, came from caloric beverages, Dr. Popkin and colleagues reported. Studies have shown that people who drink these extra calories don’t compensate by consuming commensurately fewer calories from food, which has contributed mightily to the ballooning waistlines of Americans.

To be sure, it’s important for athletes to drink plenty of water, especially when high levels of activity, heat and humidity result in excessive sweating. But overdoing hydration has its own risks; marathon runners and other athletes have died after drinking more water than the kidneys are capable of processing in a timely manner, leading to swollen cells and dangerously low blood levels of sodium and other electrolytes.

At the same time, inadequate hydration can have debilitating effects. Studies by Lawrence B. Armstrong and colleagues at the University of Connecticut’s Human Performance Laboratory showed that dehydration can adversely affect vigilance, concentration, reaction time, learning, memory, mood and reasoning and can cause headaches, fatigue and anxiety.

Older people, especially the frail elderly, are among those at greatest risk of poor hydration, Dr. Popkin noted. The mechanism of thirst becomes less effective with age, and many older people cut back on how much they drink to limit how often they need to get to a bathroom.

“There’s a big problem with older people falling during the night and breaking bones when they get up to go to the bathroom,” Dr. Popkin said. “Many don’t drink because they’re afraid to fall, but instead they may die of the effects of dehydration.”