For many American moms, Mother’s Day included breakfast in bed, flowers and extra hugs. But then there was the aftermath. In stories shared on social media over the past few days, the real perils of motherhood have emerged, many of them accompanied by the hashtag #mothersdayfail.

Some mothers, like Debby Florence, opened their browsers to the Google search engine and discovered the corporate version of the reality of motherhood. Google often changes its search engine logo (called the “doodle”) in celebration of holidays, and for Mother’s Day, the company’s offering was a doormat. 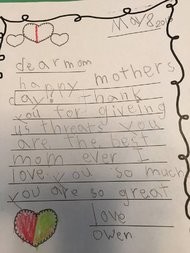 For others, the day’s real message arrived in the form of a card or a child’s social media post — a little funny, a little biting.

One mom reported that her husband had given her a sympathy card for Mother’s Day. The card, posted on Twitter, showed an empty chair and the sentiment “She was quite a lady.” Her husband had crossed out the word “was” and wrote “is.”

“When your husband justifies getting you a sympathy card for Mother’s Day by making it present tense,” tweeted @NoraBattle.

Another mom posted that her husband gave her a grandmother’s card. “When the hubby doesn’t read the card for mother’s day all the way through before giving it to you,” tweeted @JennyBO62913.

Margy Stratton found this update on her middle-school daughter’s Instagram account: a picture of her daughter and her younger sister, arms crossed and with tough-girl expressions, captioned: “We don’t need no Mom #rebels.”

Some moms reported that the day started with promise, until their child turned on them.

That’s what happened to Elif Ozdemi, whose 4-year-old son gave her a dozen roses. By the afternoon, the sentiment had faded after she suggested they leave the playground after two hours.

“Bad Mommy!” he said. “I should never have gotten you flowers today.”

Sarah Ellison, a New York-based magazine writer, had a similar experience. “I’ve had Mother’s Eve dinner, breakfast in bed, presents, and so much love on this Mother’s Day. Then, we hit a bump in the road,” she shared with her Facebook friends, including a photo of the second card she received from her 7-year-old daughter that day.

“I wish I never gave you a Mother’s Day card!” it said. Instead of signing the card “love,” her daughter signed it “hate.” The post generated more than 150 likes..

“HIlarious,” wrote a friend. “A true testament to the loving forbearance of mothers everywhere.”

Ms. Ellison notes that her offense was that she had reprimanded her child for hitting her sister. Mother and daughter quickly made up and went for a bike ride. She says she found her daughter’s use of the word “hate” as her closing to be “fairly inspired.”

“May use it myself one day,” she wrote.

Some children offered cards that were a little too honest, whether intentionally or not. Courtney Redfern Klein‪ of Montclair, N.J., wrote that the card she received from her 6-year-old son, Owen, was going in the “memory box.”

“Dear Mom,” he wrote. “Thank you for giving us threats. You are the best mom ever.”

She’s pretty sure he meant to write “treats,” but admits, “I do threaten them sometimes.” 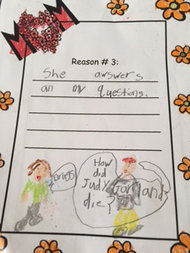 One second-grade teacher sent each child home with a daffodil with a heart-shaped note attached. Emily Rosenbaum’s daughter wrote on her note: “Dear Mommy, Thank you for trying not to lose your temper.”

Daisy Florin’s son Oliver shared the reasons he loves his mom. She proudly posted his third reason to Facebook: an illustrated declaration that she answers his questions, like “How did Judy Garland die?” “Drugs.” She hashtagged it “#original #owndrummer.” 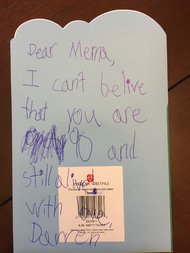 Then there’s this message Kerry Milch’s first-grade son wrote to his great-grandmother: “Dear Mema I can’t believe that you are 90 and still alive. with love, Darren.”

Other moms shared stories of a blissful day, followed by a stark reality check when the day was over.

Kim Tracy Prince of Los Angeles spent the evening of Mother’s Day washing the dishes and pans from her Mother’s Day breakfast in bed. “I held my resentment in check because it had been such a nice day,” she wrote. “Besides, nobody does it right but me anyway.”

“My super sweet family let me know as soon as I woke up yesterday morning that they were taking care of all the chores including the laundry!” wrote Tracy Georges. “Sure enough I saw no laundry all day.”

In the morning, Ms. Georges looked at the laundry area in her garage. “Guess what I found? Eight (maybe 9?) piles of unwashed laundry,” she said. “So basically for Mother’s Day, they hid the laundry from me.”