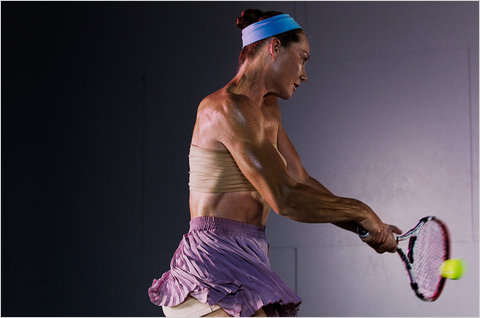 This week’s New York Times Magazine focuses on the hard-hitting women of tennis. But the real star of the issue is the breathtaking photography and video that capture the striking athleticism and beauty of some of the world’s top players.

The photo and video shoot, directed by the photographer Dewey Nicks, captured seven tennis greats, including Kim Clijsters, Serena Williams and others, in the midst of their most powerful moves. The athletes are styled in nontraditional tennis wear, such as a sparkling black dress sported by Ms. Williams and a cashmere Chanel bodysuit worn by Vera Zvonareva. In some shots, colored chalk and glitter fly around the women as they strike the ball. The final result is an enthralling slow-motion dance that highlights the athletes’ remarkable fitness and beauty.

“We wanted to do something about motion and power and the beauty of the sport,’’ said Kathy Ryan, director of photography for the magazine, who commissioned the project. “I like that in these pictures they are very muscled and strong and powerful, but at the same time they can be very sexy and beautiful.”

By Directed by Dewey Nicks, Music by Pamela Chen on Publish Date August 25, 2010.

Getting the world’s top women tennis players all together for a photo shoot wasn’t easy. Stacey Baker, deputy photo editor, worked with the Women’s Tennis Association to organize the project, and after months of planning, the photo and video session for six of the women was scheduled around the Cincinnati Women’s Open this month. Because Ms. Williams pulled out of that tournament, her video and photos were taken in Los Angeles.

At the beginning of the shoot, the players met with Mr. Nicks and Susan Winget, a stylist, to decide what to wear. Once the athletes were ready, they began to hit balls with two video cameras and two still cameras aimed at them. The shoot included a special slow-motion camera called the Phantom Flex, unique for its ability to shoot as many as 1,455 frames per second.

“It slows down the action in a way that you see things that you haven’t really seen before,’’ Ms. Ryan said.

Although a ball machine was used for some of the shots, the photographer and photo editors decided that many of the shots would be more effective if a real person was feeding the ball to the players. Bravely, in stepped Ms. Baker, a skilled tennis player, who agreed to operate the ball machine and throw the balls to the desired spot when needed.

“When Kim Clijsters returned the ball, I turned around just in time to see Stacey duck,” Ms. Ryan said. “There were a lot of warnings to people to step out of the way as they were hitting them.”

Miki Meek, Web producer for The Times Magazine, worked with a musician, Pamela Chen, to set the videos to music. Each of the mini films focuses on a different aspect of the woman’s game. The remarkably flexible Ms. Clijsters is shown leaping up from a near split, her thigh muscles rippling as much as her pleated skirt. For Ms. Zvonareva, the video focuses on her face and her piercing blue eyes.

“Her eyes are like laser beams,” Ms. Ryan said. “It seemed like her eyes zeroing in and following that ball really defined her.”

To see all the videos and credits, go to “The Beauty of the Power Game.” And for more photos, check out the slide show, “Women Who Hit Very Hard.”