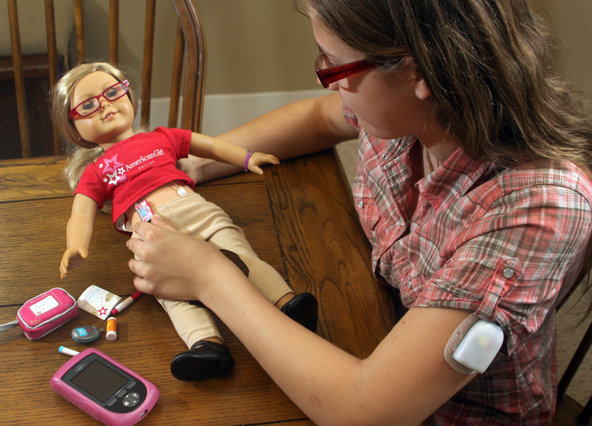 Anja Busse, 13, plays with her American Girl doll, Alice, and her diabetes care kit at her home in Antigo, Wis.Credit Corey J. Schjoth for The New York Times

Children with Type 1 diabetes can’t make their own insulin, so they have to count carbs, prick their fingers to check their blood sugar and get regular insulin infusions.

Now they can also give that care to their dolls.

American Girl, the doll company, has introduced a diabetes care kit for dolls, and it has been available only intermittently because it’s so popular.

The kit, which sells for $24, has 10 doll-size make-believe items, including a blood sugar monitor, a lancing device, an insulin pump that can be clipped to a doll’s waistband with an adhesive to attach the infusion set, as well as an insulin injection pen needle (for dolls not using the pump). There are also a vial of pretend glucose tablets, a medical bracelet, an ID card, logbook and stickers, and everything fits in a bright fuchsia carrying case the size of a small change purse.

Anja Busse, a 13-year-old from Antigo, Wis., who has Type 1 diabetes, has wanted a kit like this for her doll since she learned she had diabetes just over two years ago. She started an online petition urging American Girl to make diabetes accessories for the dolls, rallying the Type 1 diabetes community and garnering 7,000 signatures.

Anja learned that she had the disease in October, 2013, when she was 11. That Christmas, she got her first American Girl doll – which had hazel eyes, blond hair and freckles, just like her — but was disappointed when she scoured the catalog and couldn’t find any diabetes supplies (though she quickly accumulated accessories for girls with disabilities, like a service dog and a wheelchair).

“There are a lot of things people just don’t understand,” Anja said. “They would try to give me advice and say I should be on a diet, or that they had a cure for this. One person yelled at me not to eat a cupcake. They confuse it with Type 2 diabetes, and all kinds of rumors that aren’t even true.”

One of the things she always tells her friends, she said, is “You can’t catch it.”

She recently took the doll diabetes kit to help explain Type 1 diabetes to a group of kindergartners.

Buyers have posted rave reviews of the kit on American Girl’s website.

“I ordered this the day it came out,” a teenager wrote. “When my dad showed me, I almost cried. I was diagnosed with Type 1 diabetes when I was seven years old and I bought my first AG doll when I was eight.” She said she bought the diabetes kit the day before her 14th birthday.

A mother wrote, “Finally there’s something for girls with Type 1 diabetes to play with that makes them feel like they fit it, and can get some awareness out there.”

“It makes dealing with this disease a little more tolerable,” wrote another mother.

“American Girl has a long-standing history of creating dolls that speak to diversity and inclusion, so it’s not really new for us to come out with dolls that are a reflection of girls today,” said Stephanie Spanos, a company spokeswoman.

The company has a historical line that includes Hispanic, African-American, Jewish and Native American characters, as well as the Truly Me line of dolls that can be ordered to have the same skin tone, eye and hair color as the little girls who own them.

Girls can order outfits, miniature musical instruments, art supplies and athletic gear for their dolls, and small pretend wheelchairs, eye glasses, hearing aids and service dogs are also available. Customers can custom order a doll without hair for a girl who has alopecia or is going through chemotherapy, and arm crutches were introduced in January.

The idea for a diabetes care kit “came to fruition just like any other product – our design team is constantly bringing forth new ideas for accessories and clothes,” Ms. Spanos said.

Matt Wahmhoff, the designer who developed the kit for American Girl, said he was thrilled to be part of the effort because he has Type 1 diabetes himself. “I was diagnosed at age 11, and it really made me feel different,” Mr. Wahmhoff, who is now 42, said. “My friends were clueless, and I didn’t have a way to share it so I kept it inside me.”