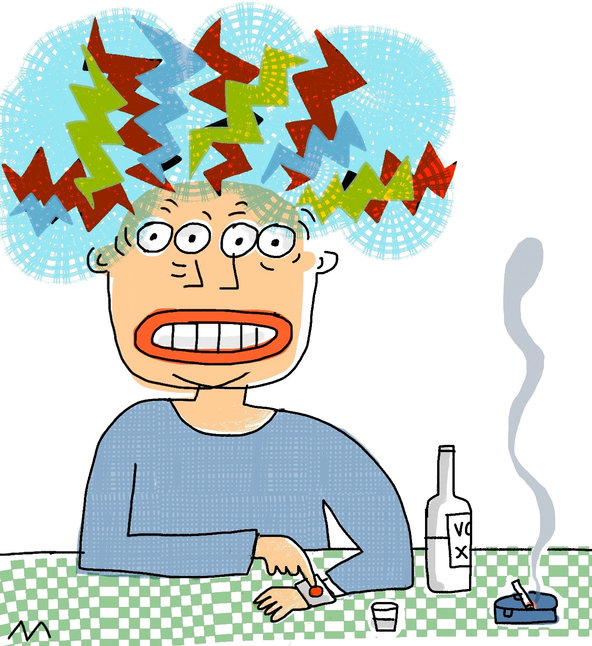 Every January for the past decade, Jessica Irish of Saline, Mich., has made the same New Year’s Resolution: to “cut out late night snacking and lose 30 pounds.” Like millions of Americans, Ms. Irish, 31, usually makes it about two weeks.

But this year is different.

“I’ve already lost 18 pounds,” she said, “and maintained my diet more consistently than ever. Even more amazing — I rarely even think about snacking at night anymore.”

Ms. Irish credits a new wearable device called Pavlok for doing what years of diets, weight-loss programs, expensive gyms and her own willpower could not. Whenever she takes a bite of the foods she wants to avoid, like chocolate or Cheez-Its, she uses the Pavlok to give herself a lightning-quick electric shock.

“Every time I took a bite, I zapped myself,” she said. “I did it five times on the first night, two times on the second night, and by the third day I didn’t have any cravings anymore.”

As the name suggests, the $199 Pavlok, worn on the wrist, uses the classic theory of Pavlovian conditioning to create a negative association with a specific action. Next time you smoke, bite your nails or eat junk food, one tap of the device or a smartphone app will deliver a shock. The zap lasts only a fraction of a second, though the severity of the shock is up to you. It can be set between 50 volts, which feels like a strong vibration, and 450 volts, which feels like getting stung by a bee with a stinger the size of an ice pick. (By comparison, a police Taser typically releases about 50,000 volts.)

Other gadgets and apps dabble in behavioral change by way of aversion therapy, such as the $49 MotivAider that is worn like a pager, or the $99 RE-vibe wristband. Both can be set to vibrate at specific intervals as a reminder of a habit to break or a goal to reach. The $80 Lumo Lift posture coach is a wearable disk that vibrates when you slouch. The $150 Spire clip-on sensor tracks physical activity and state of mind by detecting users’ breathing patterns. If it detects you’re stressed or anxious, it vibrates or sends a notification to your smartphone to take a deep breath.

But the Pavlok takes things a step further, delivering a much stronger message.

To test the device, I wore it for a week, zapping myself every time I ate dessert. My goal was to curb my craving for sweets after dinner. First I zapped myself before and after I ate a square of dark chocolate, and did it again later in the week after eating ice cream, a red velvet cupcake and a chocolate chip cookie.

Set on low, it feels like a strong tickle. Set on high, it hurts. A lot.

It should be noted that the creator of Pavlok, Maneesh Sethi, once hired a woman to sit next to him and slap him on the face every time she saw him using Facebook, so he could increase his productivity. I called Mr. Sethi and told him that if we ever met, I’d try not to punch him in the face for creating such an awful torture device. “Yeah, I get that a lot,” Mr. Sethi said with a chuckle. “People either love it or hate it.”

“It’s not designed to be painful,” he added. “It’s instantaneous, a surprise sensation, a shock that knocks you out of automatic mode.”

But does this kind of self-imposed aversion therapy actually work?

“The most clever thing about this gadget is the name,” said Dr. Peter Whybrow, a Los Angeles author, psychiatrist and neuroscientist. “It’s an expensive spin on the idea of wearing an elastic band that you snap on your wrist to stop a certain behavior.”

The practice of aversion therapy has been around for 80 years. Schick Shadel Hospital, based in Seattle, reports that it has successfully treated more than 65,000 people for alcohol or drug addiction using counter-conditioning methods like emetic drugs, which make people feel nauseated if they drink alcohol, or supervised shock therapy. The hospital’s medical director, Dr. Kalyan Dandala, said that he was interested in using Pavlok to help people continue recovery once they finish the 10-day inpatient treatment, but added that the device should be professionally supervised.

“It’s better suited as a prescribed tool for behavior modification,” Dr. Dandala said. “The company needs to refine it, put more education in the tool, and have more oversight.”

Michelle Freedland, a psychiatric nurse practitioner in Manhattan, has worked with five patients who use the device for nail biting, addictions, compulsive behaviors and more.

“When one of my patients told me he was using it last year to help him get out of bed in the morning, I was skeptical at first,” she said. “I mean, the notion of being shocked — you can have a little reservation. But when you understand how to use it properly and people are more engaged in their own treatment, they tend to follow through with it more.”

Mr. Sethi, the founder, said the company had just begun to collect data on the long-term success of the device, and was planning a clinical trial later this spring. The Pavlok has been available since November, and he said about 10,000 people had used it.

Despite the potential for pain and the lack of science backing a long-term effect, user feedback on Facebook groups and message boards has been enthusiastic about the device, especially as a last resort for problems like overeating and binge drinking.

Bud Hennekes, 24, a blogger in St. Louis, said he had used Pavlok to kick a nearly two-pack-a-day cigarette habit. “When I tried to quit before, I still had the craving to smoke,” he said. “When I used Pavlok, the cravings completely went away. I don’t know if it’s science or a placebo effect or what, and I don’t really care because it worked.”