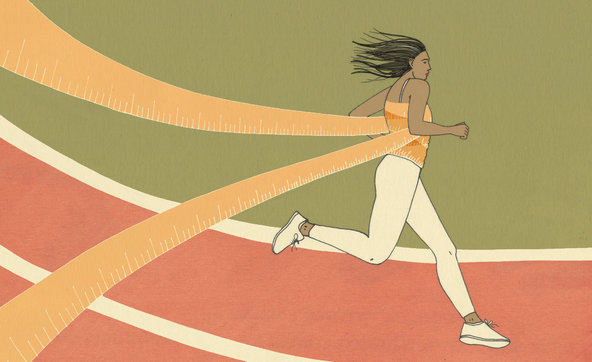 So why aren’t more teenage girls out on the playing fields?

Research shows that girls tend to start dropping out of sports and skipping gym classes around the onset of puberty, a sharp decline not mirrored by adolescent boys.

A recent study in The Journal of Adolescent Health found a surprisingly common reason: developing breasts, and girls’ attitudes about them.

In a survey of 2,089 English schoolgirls ages 11 to 18, nearly three-quarters listed at least one breast-related concern regarding exercise and sports. They thought their breasts were too big or too small, too bouncy or bound too tightly in an ill-fitting bra. Beginning with feeling mortified about undressing in the locker room, they were also self-consciously reluctant to exercise and move with abandon.

Experts on adolescent health praised the study for identifying and quantifying an intuitive thought.

“We make assumptions about what we think we know, so it’s important to be able to say that as cup size increases, physical activity decreases for a lot of girls,” Dr. Sharonda Alston Taylor, an assistant professor of pediatrics at Baylor College of Medicine in Texas, who focuses on adolescent obesity.

The challenge is what to do about it.

After reading the study, some pediatricians and adolescent health specialists said they needed to do a better job informing girls about breast health and development. Almost 90 percent of the girls in the study said they wanted to know more about breasts in general, and nearly half wanted to know about sports bras and breasts specifically with respect to physical activity.

Joanna Scurr, the lead author of the study and a professor of biomechanics at the University of Portsmouth in England, said the breast itself had little internal support, so when a girl’s body moved, the breast moved independently, and the movement increased with breast size. In up to 72 percent of exercising women, she said, that movement was a cause of breast pain or discomfort.

Yet while sports and physical education programs frequently recommend protective gear for boys, like cups, athletic supporters and compression shorts, comparable lists for young women rarely include a mandatory or even recommended sports bra.

Only 10 percent of the girls surveyed said they always wore a sports bra during sports and exercise. More than half had never worn one.

Dr. Taylor said that lack of education about bra fitting and sizing was commonplace in her practice.

“The mom will say, ‘I don’t know what size she is,’ and the patient will say, ‘I just grab my sister’s or my mother’s bras to wear.’”

Using data from this study and others, the researchers from sports and exercise health departments at three British universities are trying to design school-based educational programs.

When researchers asked the girls how they would prefer to receive breast information — via a website, an app, a leaflet or a private session with a nurse — the overwhelming majority replied that they wanted a girls-only session with a female teacher.

Andria Castillo, now 17 and a junior at Mather High School in Chicago, says she remembers that when she was around that age, she was painfully self-conscious about her breast size; she thought she was developing more slowly than everyone else.

“I felt boys and girls were making fun of me,” she said. “Even though no one called me out, I felt they were, behind my back. I was taking taekwondo, and I would look in the big mirror and try to find ways to cover myself up and hide. I asked my dad if I could stop going.”

She had a friend who had been active in sports. But in the sixth grade, the girl’s breasts developed rapidly. “She eventually stopped going to gym altogether,” Ms. Castillo said. “Instead, she just went to a classroom and did her homework.”

In time, Ms. Castillo turned her attitude around; she is now on her school’s varsity water polo and swim teams. She credits not only her mother, but also a Chicago-based project, Girls in the Game, which has body-positive, confidence-building programs, including single-sex athletics.

Some experts in female adolescent obesity and fitness suggested that young girls would be more comfortable in single-sex gym classes. But others said that option had its disadvantages, too.

Kimberly Burdette, a doctoral candidate in psychology at Loyola University Chicago who looks at the psychological factors that promote well-being and healthy weight in girls, says such separation might be helpful at a time when adolescent girls had a heightened awareness that others were looking at their bodies.

“It’s hard to be in the zone, focusing on athletic movement, on what your body can do, if you’re thinking about what others think your body looks like,” she said. “I like programming that is for girls only, where a girl can try a sport, regardless of her ability, without the male gaze.”

But Elizabeth A. Daniels, an assistant professor of developmental psychology at the University of Colorado Colorado Springs, disagreed. “I’m not sure the concern or embarrassment is always just about boys,” she said, noting that girls can make derisive comments about one another. “So do we change the structure of the gym class or address respectful behavior?”