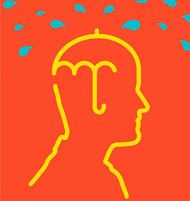 I’m a worrier. Deadlines, my children, all the time they spend online — you name it, it’s on my list of worries. I even worry when I’m not worried. What am I forgetting to worry about?

Turns out I’m not alone. Two out of five Americans say they worry every day, according to a new white paper released by Liberty Mutual Insurance. Among the findings in the “Worry Less Report”: Millennials worry about money. Single people worry about housing (and money). Women generally worry more than men do and often about interpersonal relationships. The good news: Everyone worries less as they get older.

“People have a love-hate relationship with worry,” said Michelle Newman, a professor of psychology and psychiatry at Pennsylvania State University, who was not involved in the writing of the report. “They think at some level that it helps them.”

The belief that worrying somehow helps to prevent bad things from happening is more common than you might think. Researchers say the notion is reinforced by the fact that we tend to worry about rare events, like plane crashes, and are reassured when they don’t happen, but we worry less about common events, like car accidents.

But that doesn’t mean all worrying is futile. “Some worry is actually good for you,” said Simon A. Rego, the author of the new report and a cognitive behavioral psychologist who specializes in anxiety disorders and analyzed decades of research on worrying for the paper. “It’s what we call productive or instructive worry, that can help us take steps to solve a problem.”

One study published in 2002 recruited 57 young adults and asked them to list their worries in a diary for seven days and rate each worrying episode.

When the researchers analyzed the results, they determined that about 20 percent of the worries were about anticipating a negative outcome in the future. But nearly half of all the documented worries reflected a process of problem solving. While that can be constructive, people who worried a lot and couldn’t control their worrying were less likely to find a solution to their problem. The researchers, Marianna Szabo, now at the University of Sydney, and Peter F. Lovibond of University of New South Wales in Australia, concluded that failing to come up with solutions may actually lead to more pathological worrying.

In 2007, the same researchers tried to correlate aspects of worrying with specific components of problem-solving, like defining the problem, gathering information, generating solutions, evaluating and choosing a solution. Once again, they concluded about half the cognitive content of the worry episodes included attempts to solve a problem. Once people devise a solution, they quit worrying one-third of the time. But people found it hard to stop worrying if they weren’t satisfied with the solution they came up with.

People “get caught up in the worry itself,” Dr. Newman said. “It becomes so habitual, I call it ‘a process looking for content.’”

That kind of worrying can get out of hand. “Excessive worriers have multiple domains that they worry about, and if something triggers a worry in one domain, it can seep into other areas,” Dr. Rego said, “and things can move back and forth like wildfires — once one gets going, it can start other fires as well.”

Worrying, a cognitive process, should not be confused with anxiety, which generally refers to an emotional state of unease that also includes worry. While 38 percent of people worry every day, most of them do not have anxiety. Generalized anxiety disorder, the primary feature of which is excessive and uncontrollable worrying, affects only 2 to 5 percent of the population.

Liberty Mutual Insurance officials commissioned the report to better understand how Americans can “break the worry cycle,” since the insurance business is designed “around helping people live with less worry,” said Margaret Dillon, the company’s executive vice president and chief customer officer for the United States, adding that it could also help them develop the most appropriate products. The report noted, for example, that top worries for people ages 25 to 44 are about finances and housing, she said.

If you’re worried about your worrying, the report suggests some coping strategies, including:

Divide and conquer Try to come up with a solution to a worrisome problem by breaking it down into four parts: defining the problem, clarifying your goals, generating solutions and experimenting with solutions. Grab a pen and paper and brainstorm, the report suggests.Studies have shown this approach can help ease depression and anxiety.

Practice mindfulness Choose a routine activity or part of the day and try to experience it fully. Set aside concerns, and try to be “in the moment.”

Practice accepting uncertainty Notice your thoughts and label them (as in “there is the thought that I can’t manage”). Let go of tension in your body; soften your forehead, drop your shoulders and relax your grip.