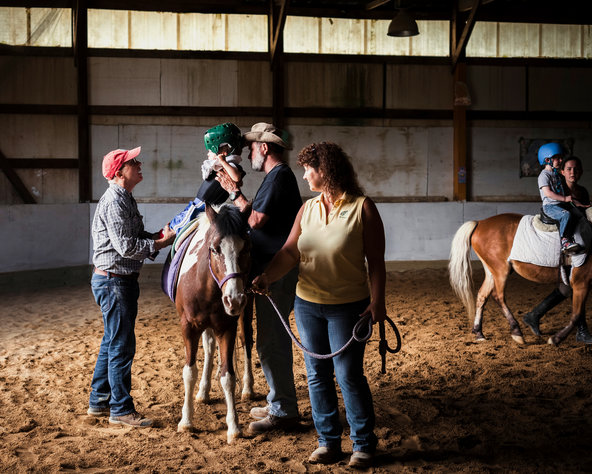 Three-year-old Jack Foster sat on his mother’s lap as she wrapped a towel carefully around his neck.

“Jack has cerebral palsy and low muscle tone,” said his mother, Emily Foster, of Northbrook, Ill. “The biggest challenge is holding his head up.”

With help from his occupational therapist, Ms. Foster fit a riding helmet on Jack’s head and clicked the chinstrap buckle into place. She then watched as the occupational therapist and two volunteers positioned her young son onto a red pony. Jack seemed delighted as one volunteer stood to his right and softly sang, while another led the pony slowly around the arena.

Jack was at Horsefeathers Therapeutic Riding in Lake Forest, Ill., for hippotherapy, a form of equine-assisted therapy conducted by licensed physical, occupational and speech therapists to improve muscle tone, speech and other functions (“hippos” is the Greek word for horse; the American Hippotherapy Association has a therapist locator at americanhippotherapyassociation.org). Hippotherapy is used to treat a variety of conditions, including brain injuries, cerebral palsy, spine curvature, intellectual disabilities, language disorders and sensory processing disorders.

The natural movements of the horse and the environmental cues enable therapists to work toward treatment goals in a setting that might feel like fun, but that research shows can have real benefits. A recent study in Physical & Occupational Therapy in Pediatrics, for example, found that children with cerebral palsy had increased body control after only 10 sessions of hippotherapy. Gross and fine motor skills also improved.

A horse striding around the barn takes around 100 steps a minute, said Dr. Tim Shurtleff, an instructor with the occupational therapy program at Washington University in St. Louis. Each stride pushes the rider’s pelvis forward, so after 35 minutes, a rider undergoes more than 3,000 repetitions of “trunk challenge,” in which the trunk is pushed forward and back. With each step the horse takes, the rider must subtly work to stay upright.

“That’s the power of this – it’s an intensive movement experience,” Dr. Shurtleff said. “The person on the horse is forced to respond to that movement.”

For riders like Jack Foster, who has been doing hippotherapy for over a year, the pelvic thrust helps to strengthen the low muscle tone in his neck and trunk, while relaxing the muscles in his hips and thighs. In his daily life “he will arch and extend, which makes his hips and his thighs really tight,” Ms. Foster said. “Sitting on the horse stretches it.”

During a typical therapy session, Jack sits on this horse facing both forward and backwards. Sessions can include a ball toss or placing rings onto long rods and cones, designed to improve trunk and neck control as well as his reaching abilities.

Researchers are now testing hippotherapy as an intervention for adults with multiple sclerosis and other neurological disorders. Dr. Deborah Silkwood-Sherer, the program director for the physical therapy department at Central Michigan University, said hippotherapy can also boost motivation in children who have disabilities and have been in therapy for years.

“People don’t realize they are working hard on a horse,” Dr. Silkwood-Sherer said. The visual and sensory input of a barn and stable setting provides additional stimulation. “For kids, they never think they are doing therapy.”

Meredith Bazaar of Ringwood, N.J., a speech and language pathologist, uses hippotherapy to treat clients, including those with apraxia, a brain disorder that makes it difficult to articulate or speak words.

“The movement of the horse is so repetitive and coordinated,” she said, allowing her to manipulate a client’s lips, chin or cheeks with her hands to help them make a desired sound. With every stride the horse takes, the client repeats the target sound, such as “ga,” which might double as a command to have the horse “go.”

At Horsefeathers, the founder and executive officer Nick Coyne has 10 gentle horses and ponies he uses for both hippotherapy and adaptive riding, which enables people with physical and mental disabilities to ride horses. He refers to some of his animals as “bomb horses,” meaning a bomb could go off and the horse would not react.

The horses are all trained to stop promptly if they sense a rider is slipping and to ignore the sudden, delighted shrieks a rider might make, as well as spastic movements, Mr. Coyne said.

Alex Brock, 22 of Lake Bluff, Ill., has microcephaly and cerebral palsy, and is also nonverbal and incontinent and has difficulty processing language. He aged out of the public school system, but once a week he eagerly leaves his wheelchair to work with Mr. Coyne as an adaptive rider.

His mother, Trina Brock, was initially incredulous when she heard about adaptive riding at Alex’s former high school. “My first thought was, how is he going to ride a horse?” she said. But she said her son now eagerly anticipates his weekly visits to the barn, and says the exercise helps strengthen his trunk.

It takes three people to help Alex ride, and Ms. Brock said the first time she saw her son on a horse, “I cried.”

Hippotherapy is not suitable for everyone. Ms. Bazaar said some clients turn out to have horse allergies, and allergy medications can make them too drowsy to participate. People with spinal abnormalities like spina bifida may not be good candidates either, and those with Down syndrome and other conditions should be first examined by a physician to determine if their spines are stable enough to endure the rides, she said.

But for children like Jack Foster, riding a horse can open up new opportunities. “It was the first therapy he had done without me,” his mother said.