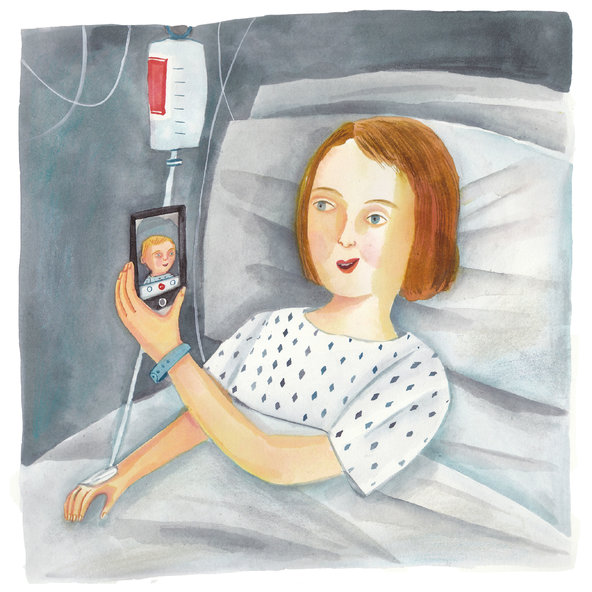 Sammy was born small and had a hard time gaining weight. When he was 2 months old we learned he had a rare condition, alpha-1 antitrypsin deficiency. This disease, inherited from both sides of our family, significantly impaired Sammy’s liver function, as it does in a very small percentage of patients. We were told that he would probably outgrow this dysfunction, as most children with his condition do because their bodies learn how to compensate for the disease process. But Sammy didn’t.

By the time Sammy was a year old, he had developed the consequences of liver failure. His swollen abdomen and bloodshot eyes reminded me of the cirrhotic patients I cared for as an emergency room doctor. Every night, while changing his diaper, I would feel along his abdomen to measure his liver size and check his belly for fluid. I couldn’t help myself. My identities as a physician and mother were clashing. Sammy was my son, and despite my desire to leave the medicine to his doctors, and only be his mom, he was also my most important patient.

One afternoon Sammy’s doctor said: “I think we are heading toward transplant.” I had been expecting this, dreading it. His next question: “Would you consider serving as the living donor?” Unlike other organ donations, this can be done by removing a piece of a donor liver, which can then regenerate in the recipient. He explained that Sammy was an ideal candidate for a living donor liver donation and that he wanted to proceed with an evaluation as soon as possible. “Of course,” I said. “Where do I sign?”

We quickly learned that in a family where both parents are suitable donors, like ours, there seem to be fewer complications when a mother is donating to her child. This is based on small studies and anecdotal data, but Michael and I wanted to stack the odds in our favor as much as possible.

The morning of the transplant we took the obligatory pre-surgery family photo and rode the elevator up to the pediatric pre-surgical admitting suite. Once Sammy was registered for his surgery we broke up into teams. Team Sammy consisted of his father, grandmother and grandfather. Team Mommy had my sister and a doctor friend from my medical residency.

The surgeries took place in separate buildings. The retrieval of the healthy left lateral segment of my liver occurred at the adult hospital, while the removal of Sammy’s diseased liver and replacement with his “new” organ happened in the children’s hospital.

As a physician and as a mom, I was used to solving most problems with my two hands and my brain. Not today, I told myself. Today, I just need to say a prayer, go to sleep and make myself available for parts donation. I closed my eyes.

The next thing I remember, I woke up in the intensive care unit. Only a few hours had passed and Sammy was still in surgery. I wanted to get up and be there for my baby, but I couldn’t. I was a patient bound by tubes and lines and physically incapable of moving. So I went back to sleep.

They woke me as soon as he was in recovery. Just knowing we were both out of the O.R. was enough for me to take a deep breath. We had come through this experience together, as mother and son, and a piece of me was helping him get better.

Over the next few weeks I would have to delegate both mothering and doctoring to other people. Michael sat with Sammy and I was a patient. I got out of bed and moved to a chair. I took small walks down the hall and then came back to my bed exhausted. I considered it a small victory when I could finally hold down a sip of juice.

I was discharged two days after the operation. Leaving the hospital with Sammy in the I.C.U. was harder than I thought, even though I knew it would happen. It’s kind of like getting discharged after having a baby, but the baby can’t come home: You feel as if you are leaving some part of yourself behind.

At home my recovery was pretty unremarkable. It turns out that other than being slightly uncomfortable and relatively exhausting, re-growing your liver is easier than being a new mom. I could take pain meds if I needed and nap like a preschooler.

When Sammy and I were both awake, we could FaceTime (he used Daddy’s phone). There wasn’t much to our conversations, but I could see his face, to look in his eyes, and know that with each day he was getting better, closer to coming home.

Post-operative day 5 was also Sammy’s 2nd birthday. He was still an inpatient but out of the I.C.U. We threw him a birthday party in the hospital family lounge. Pizza, cake, family and Sammy’s favorite music teacher made it feel like a true celebration. That was also the first day I actually held and kissed my son. It was amazing.

He was discharged the next day. At home we lounged in bed, watching lots of television and taking way too many selfies on my phone. And savoring the luxury of doing nothing special together.

It has been a year and half since the surgery. Sammy looks great and is on minimal medication. He goes to school full time, and most people have no idea what he went through. The scar on his abdomen has mostly faded, and we aren’t sure if he even has any memories of this experience.

My liver has grown to full size and my scars are nearly invisible. But that doesn’t mean I am entirely recovered. There are moments, and they are less frequent and further between, that I get spontaneously choked up. This experience was both frightening and inspiring. I had to briefly give up being both doctor and a mother to become a patient. It was as a living donor that I was able to help my son the most.

Dara Kass is an emergency physician at NYU Langone Medical Center and editor of feminem.org.