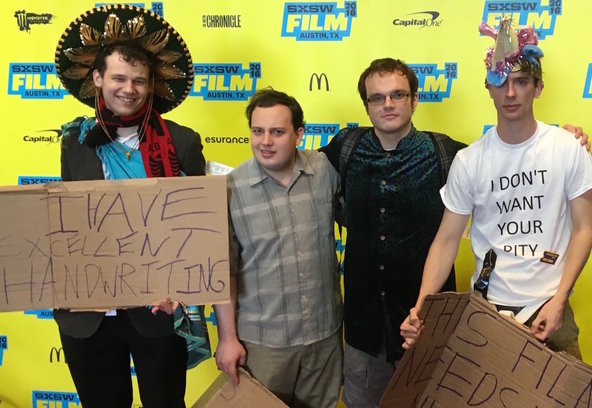 The Asperger’s Are Us comedy troupe, from left to right, Jack Hanke, Ethan Finlan, New Michael Ingemi and Noah Britton, jokingly protested their own movie at its SXSW premiere.Credit Andrew Cohen 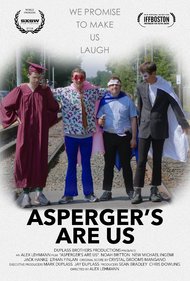 The four members of Asperger’s Are Us decided a long time ago that their main goal would be to amuse themselves.

But after nearly a decade of laughing and writing punch lines together, Asperger’s Are Us, which is probably the only comedy troupe made up of people on the autism spectrum, is on the cusp of comedic success.

A documentary about the group premiered at the SXSW conference in Austin in March and was recently sold to Netflix. The troupe is also preparing for its first national tour this summer.

Comedy might be a surprising choice for someone with Asperger’s syndrome, since stereotypically, people with autism are generally regarded as socially awkward loners. But the four men in the group bonded at summer camp 11 years ago, when one was a counselor and the other three were campers, and are clearly great friends.

An “Aspergers Are Us” performance from 2011.

Talking recently via Skype, Noah Britton, the former counselor, settles giant black rabbit ears onto his head. Jack Hanke, another member of the troupe, dons his favorite sombrero – the black one he took with him to Oxford University during his recent junior year abroad – accessorized with a red sombrero on top.

They slip into their usual banter when asked what they thought of the film, named for the group, which will be shown publicly for the first time on Friday at the Somerville Theater outside of Boston.

“I liked the four weird guys in it,” Mr. Britton said.

“I found it kind of annoying myself,” added Ethan Finlan, another member of the group.

The fourth member, who changed his first name to New Michael to distinguish himself from his father, Michael Ingemi, didn’t want to join the call.

The filmmaker, Alex Lehmann, said he had planned to make a short documentary until he realized he had a powerful coming-of-age story to tell about these men and their relationships that goes well beyond their autism. The final film runs about two hours.

Like many people on the autism spectrum, which is characterized by impaired social skills, communication difficulties and repetitive behaviors, each of the troupe members can get overwhelmed by sounds, sights or smells. When one gets stressed out or acts particularly “aspie,” another – usually Mr. Britton – steps in to restore calm.

Their obsessive interests – including a passion for Elton John – are often the starting point of their sketches. Mr. Finlan’s preoccupation with trains becomes another of the group’s strengths: He always knows when they need to end rehearsals to catch their trains home.

The men have also grown up with one another. Mr. Britton, 33, a musician and adjunct professor of psychology at Bunker Hill Community College in Boston, recently moved in with his girlfriend. The others, now 23, are done or nearly done with college. “It’d better be your last semester,” Mr. Britton told Mr. Hanke.  “A year ago it was your last semester, too.”

“This is my last semester three,” Mr. Hanke responded. “Last year I tried to get three semesters in two. It did not work out well. I’m making up a couple of classes now.”

Mr. Britton couldn’t resist playing on his friend’s words: “You should only take real classes,” he admonished.

Underneath the jokes there’s clearly a real admiration for one another, and an emotional connection that’s important for all of them.

“There are like two people in the world who make me feel as myself as these guys do,” said Mr. Britton, who often acts as the group’s spokesman. “When they’re not around, I can’t be what I want to be.”

All four are putting everything else on hold this summer as they launch into comedy full time.

Although they have done 15 to 20 shows together, this will be their first chance to hone their jokes night after night before a live audience. They plan to keep some of their favorite sketches and jokes – many of which were featured in the film – but also introduce new material that they will write before the tour begins, with shows planned at the Improv Asylum in Boston on July 11, and Carolines on Broadway in New York City on July 12.

Mr. Lehmann said he got interested in the troupe when he read an article about them that “changed everything that I had assumed about Asperger’s.”

Happy to have made a film he’s passionate about, rather than shooting horror flicks to pay the bills as he did earlier in his career, Mr. Lehmann said he’s proud to have played a role in the troupe’s success.

He’s confident other people will come to appreciate the humor of Asperger’s Are Us, particularly their “hilarious one-liners,” as much as he does.

“They wanted to be professional comedians – they’re at least getting a summer of it and hopefully a lot more,” Mr. Lehmann said. “I think they’re going to be a hit.”