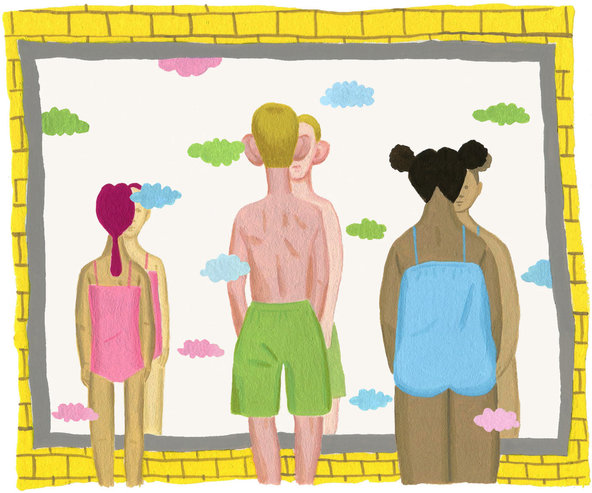 One of my daughters was born with a cleft lip. The repair, done when she was an infant, left its mark: Her face isn’t significantly different from the faces around her, but it is different. She knows it, but at 10, she cares a lot more about whether she can outpitch her younger brother than about how she looks in her baseball cap.

But now she needs orthodontic surgery, and there may be a benefit to doing cosmetic facial surgery at the same time. That means tackling a difficult subject — her looks.

How do you ask a child if she would like to change her appearance, without suggesting that something about her needs to change?

I would like to think that I’m raising a child who has absorbed all my lessons about how little our outer appearance matters compared to who we really are, but in reality, I’m raising a girl who has not yet reached her teens, in a world where magazines tell 9-year-olds what bathing suits are best for their body types. Research suggests that girls’ self-esteem plummets at around age 12 and doesn’t start heading upward again until they enter their 20s. In other words, a few short years from now, she’s likely to care about her appearance a whole lot more than she does now. But other research (and common sense) also tells us that how much emphasis our mothers put on our appearance, whether it’s our weight or our faces or anything else, affects how we feel about ourselves.

Our particular challenge might be a little unusual, but the conversation isn’t. Any parent who has talked to a child about doing something to alter the self he or she presents to the world has tried to walk that fine line between proposing a change (braces, acne medication, a healthier diet, straightened hair) and seeming to demand it — and any adult who still hears a parent’s voice judging him or her not thin enough, pretty enough, good enough knows how easy it is to get this one wrong.

“Girls tell themselves these stories about their appearance,” said Catherine Steiner-Adair, a clinical psychologist, the creator of “Full of Ourselves: A Wellness Program to Advance Girl Power, Health, and Leadership,” a program for middle-school girls and the author of “The Big Disconnect: Protecting Childhood and Family Relationships in the Digital Age.” Parents’ words and actions become a part of those stories.

“My mother wasn’t happy with her nose, so I would hear about my nose constantly,” said Jen Lancaster, a novelist and author of the memoirs “Such a Pretty Fat” and “Bitter Is the New Black.” “To this day, I can’t look in the mirror without trying to figure out, ‘Do I need to contour my nose differently today? How does my nose look today?’ This is not a conversation I should ever have with myself, because my nose is fine.”

Too often, Ms. Adair sees parents drawing conclusions from their own experience. A parent who struggled with weight worries that the weight gain many children experience as preteens may become the precursor to a life of teasing and dieting rather than just puberty.

“I tell parents, ‘it sounds like this might be more your issue than hers,’” Ms. Adair said.

The same can happen for parents who want to turn glasses into contacts, straighten or highlight a young teenager’s hair, get braces over with early or worry about girls and boys who want to wear hairstyles or clothing in a way that contradicts our vision of their gender identity. We hear the mocking voices of our own childhood.

Nancy Redd, a former Miss Virginia and the author of “Body Drama: Real Girls, Real Bodies, Real Issues, Real Answers,” says that even when a procedure seems most easily justified, if it’s purely cosmetic, parents like me should think hard before we suggest it.

“We are so arbitrary about what is attractive and what is a disfigurement,” Ms. Redd said. “Mole above the lip? Awesome. On the chin or nose or eyelid? Gross. Wide space between your two front teeth on a low-income woman in rural America? Gross. On a European supermodel? Fabulous.”

Perception, she points out, is everything.

My daughter’s nose, and her scar, and her whole face, are fine, awesome, fabulous. Some experts say it’s better not to talk about weight or appearance at all. I wish it were that simple. I’d love to take the easy way out while getting to declare it the high road. But my daughter may want to look different, and don’t think she’ll thank me for my reticence if it means a second operation when one might have been enough.

When appearance and health overlap, parents who want to talk about a child’s looks just need to be very matter-of-fact, advises Ms. Adair.

“She may not be talking about it because she’s not worried about it, or she may not want you to worry about it,” she said. She suggested that to start the conversation with my own daughter, I could remind her of times when she’s asked about her scar. Ask her if she still thinks about it, and tell her that during her surgery, “the doctors can change that if you want,” she suggested.

Parents can be similarly direct but neutral about other issues, like acne. Saying, “I see you’re getting some pimples” is a better way to preface a visit to the dermatologist than saying, “your skin looks terrible.”

When I suggested to my daughter that orthodontic surgery might give her the opportunity to make other changes, she was interested. And she had thought about her appearance, but not in the way I’d expected. After gently broaching the topic of her childhood surgery, I asked her if she wanted to change the asymmetry of her lips. She shook her head.

Instead, she asked about the symmetry of her nose, which is affected by the pull of the scar. I had never thought about that. I still suspect her upper lip will be on her list when she’s older, but knowing it was her nose she wanted to talk about guided me in asking doctors about timing and combining surgeries.

But even though she wanted answers, the consultation took us both aback. Hearing her face so bluntly discussed was upsetting for my daughter and we interrupted the doctors repeatedly, and finally steered them away from the topic. (We revisited it later, with her out of earshot.) In hindsight we should have talked to the doctor privately first. As Ms. Adair reminded me, it’s fine for parents to tell doctors: “Please do not use language that will echo in her head for years.”

In the end, my daughter’s doctors didn’t want to do anything more than remove a tooth and look around. As for her nose, they said that reconstructions done too early, while a child’s face is still growing, may have to be redone later. She didn’t seem disappointed.

For now, we’ve decided to wait and see if any additional operations are essential before we broach the topic of cosmetic surgery again. We will make health decisions for her, but we will let her decide whether she wants to undergo an optional cosmetic procedure.

And we won’t dwell on it. I don’t want my daughter’s face to look any different, and I never will. But if she does, I want what she wants — and then, I want to go back to talking about baseball.