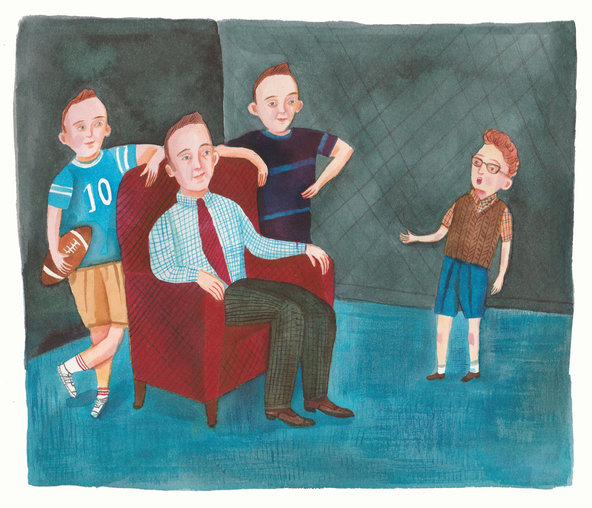 When I was a small boy my dad used to ask me for show tunes. “Sing ‘Happiness!’” he’d say to me on the ferry to Shelter Island, and I’d happily comply, the wind blowing the notes out into the Peconic Bay. And he liked to call me into the living room when he and my mom had company and say, “Sing something for us, Artie!”

My two older brothers dealt with this by secretly teaching me the song “Sodomy” from the show “Hair,” telling their credulous little brother that this would be a big hit next time Dad asked for a party number. It was a big hit all right.

Dad loved us all equally, but that didn’t mean he saw us as the same. “The boys and Artie” was a phrase I heard a lot, despite my protestations that I, too, was a boy. Perhaps he’d just gotten used to my brothers as a duo because they were only two years apart, and there was nearly a four-year gap between the middle one and me. Perhaps they were just more boyish.

My brothers certainly were the smartest kids I knew. (The smartest kids, it seemed, that everyone knew; as I came up behind them in school, I could count on teachers to say, “Oh, you’re a Levine brother – I’m expecting a lot from you.”) They never got less than an “A” as a grade. Each one, in turn, became the captain of the wrestling team and the tennis team. I idolized them even as I struggled with a sense that I’d never truly measure up. I was diabetic and I struggled physically. I was less perfect in school.

Dad didn’t make these comparisons (at least out loud). He expressed his love by showing up. He came to the musicals I performed in and clapped loudly. He went to every wrestling match my brothers competed in, shouting advice and living every takedown and pin, as if it were happening to him.

He wasn’t a heart to-heart conversation guy. As a gastroenterologist, Dad was more interested in talking about organs in the digestive tract. But he proudly (some might say relentlessly) reported our accomplishments to his patients and friends.

My father may have passed his tendency to express love by proxy on to us. Once when I was in seventh grade, I overheard my middle brother, Dan, who was a high school junior, talking to the kid who was running the school variety show. “You should get my brother to sing,” he told her. “He has a beautiful voice.”

Forty years later, this small comment still sits on the open shelves of my brain like a trophy, for an accomplishment you’d think I’d have outgrown by now.

Of course, overhearing something requires being in earshot of one another. And for us, that kind of proximity was fleeting. As adults we lived too far apart for a spontaneous hamburger or a cup of coffee, or a guy-like sharing of a sports event.

Over time my brothers seemed to have become more and more like my dad and I less so. Both became doctors, like my father. Both married nice Jewish girls. I married an Italian guy (O.K., a doctor, but still… ) and became a children’s book publisher. We each found “success,” but were careful not to talk about it with each other too directly.

For my dad, however, I would save up facts to report. If I was getting a promotion at work, if a poem had been accepted for publication, if someone praised my son, I would enjoy the good news. And then I’d enjoy packing it up for my dad and unpacking it in our next phone conversation, after which he’d say, “Terrific!! Want to talk to your mother?”

If my father was satisfied by this, I think my brothers and I were less so. Certainly, over time, it seemed to serve our relationships less and less well. What fact exchange over the phone can convey the complications of a marriage? What fact can express the near-fatal vulnerability of parenthood? What fact can reveal the passage from youth to middle age, the glimpses of what comes next?

And so we actually communicated less. It was nothing dramatic. We still loved one another. But we didn’t see one another more than once or twice a year. I’d drive past my brother’s town and think about stopping, but wouldn’t. We’d each visit our parents. Separately.

As my dad got older and developed cancer and heart problems, my brothers’ roles as medical consultants became more prominent, but we didn’t truly draw together. To spare my feelings they sometimes spoke with my husband about my dad’s problems, but in our concern we were still siloed, even as age began to make us all look more like each other … and more like him. And even as age began to take my father away from us all.

We started talking more during Dad’s long, slow, torturous decline from Alzheimer’s disease, but in some ways this just meant that the facts we had to report were not vacations, business news or our kids’ activities, but sad, tactical communiqués from a losing battle.

Then, after my dad died, a strange thing happened. My brothers began to call me just to check in. My oldest brother took to texting cartoon strips with fart jokes in them that he thought my dad would have loved. (And it’s true, the phrase “break wind” was a real favorite of his.) They asked to visit. They meant it.

I realized that the most powerful, tangible reminders of my father resided in my brothers, and in me, too. I reminded them of him. And I was one of the very few people on earth who could remember him as a father, if not exactly as they did, well, then as closely as almost anyone could.

My dad, whose affections had been a (sometimes sore) point of comparison in my head, was becoming the person who might now draw us close.

The other day I got a starred review for a picture book I’d written based on my dad, and I so wanted to call him up to share that perfect, shiny fact.

Maybe I’ll send it to my brothers.

Arthur Levine is the publisher of Arthur A. Levine Books at Scholastic, whose books include the Harry Potter series. He is the author, most recently, of the picture book “What a Beautiful Morning,” about a family dealing with Alzheimer’s disease.