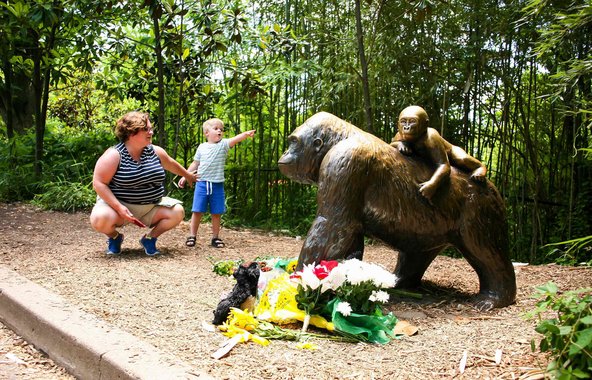 Visitors at a bronze statue at the Cincinnati Zoo, two days after a boy had tumbled into the gorilla enclosure.Credit William Philpott/Reuters

Some children are just harder to keep track of than others.

When Elodie Mailliet Storm realized her 2-year-old, Jasper, wasn’t standing with his sister at the entrance to the park at Pier 6 in Brooklyn, she suddenly knew, with sickening clarity, that her toddler had boarded the ferry to Governors Island.

But the ferry doors were closed. The boat was leaving, and the security staff refused to let her board.

“They said they would have seen him,” she said. But she knew her son, and she was sure the small boy had slipped past. She was right. When the guards finally relented, they found Jasper seated under a bench among the crowd. “I still can’t think about what might have happened,” said the Brooklyn mother of two. “He was physically capable of almost anything, but he had no concept of danger.”

Parents, of course, are fallible. But children — some more than others — are wily.

Who, if anyone, is to blame when a child wanders away? That question is at the center of a vociferous debate surrounding the case of Harambe, the majestic silverback gorilla who was shot on Saturday after a little boy climbed into his enclosure at the Cincinnati Zoo. The brunt of the online criticism has fallen on the child’s mother, who has declined to be interviewed the incident. On Tuesday, the police said that they were investigating the family’s actions in connection with the episode. There is even a petition on Change.org demanding that the parents be held accountable. So far, more than 350,000 people have signed.

But parenting experts and many parents themselves view the case differently. Not only did the child slip away from his mother – he squeezed under a rail, through wire barriers and over a moat wall – all in the presence of numerous bystanders surrounding the gorilla exhibit.

“Before you judge this mom, you have to remember that she may have taken every precaution,” said Mary Sheedy Kurcinka, author of “Raising Your Spirited Child.” Some children, she said, are just wired differently, with “a Lamborghini engine where most of us have a Chevy truck.”

Those are children who are more likely to react to their environment, to become highly stimulated and to struggle with impulse control. “They’re high energy, they’re intense, and they’re very committed to their goals,” she said. Unfortunately those goals may not be in line with those of their caregivers.

That clearly was the case of the boy at the gorilla exhibit. A witness told CNN that she heard the boy joke with his mother about going into the moat. The mother was briefly distracted by other children with her, and then “suddenly, the boy was in the water.”

For parents who are raising a risk-taking child, the story gives us pause. We know most trips out of the house require extra precautions. Closed doors and barred gates are like beacons to some kids, just waiting to be breached or climbed.

Jessica Bayreuther of Canaan, N.H., said her daughter Morgan climbed up into a machine where players try to grab toys with a claw at a Walmart in Maine when she was 2. She sat in there, victorious, for 45 long minutes while her parents, police officers and store employees searched the building. After the store had been shut down and panic was setting in, a boy playing a nearby video game pointed into the machine. “You looking for her?” he asked. Eventually, Morgan was persuaded to climb back out through the prize door (the store didn’t have the key to the machine).

Abby Vegas, a Connecticut writer, finally got a harness and leash for her daughter after retrieving her from, among other places, a hotel parking lot and a swimming pool cover. In my family, any trip to a museum involves one adult wholly dedicated to protecting the exhibits from one of our four kids – a child who once very nearly deconstructed a sculpture by the artist Joan Miró involving an umbrella, some fake flowers and a wooden stand. For that child, every new form of barrier requires a fresh reminder that indeed, what lies behind it is not to be touched.

In the case of the gorilla enclosure, Cindi Andrews, the opinion editor at The Cincinnati Enquirer, wrote this week that she initially criticized the parents for not supervising the child. But then she remembered the time she misjudged her own 18-month-old daughter’s foot speed as she approached a busy road. She chased the child down, but not before she ran in front of a car, which thankfully stopped quickly enough to avoid hitting her. “Raising a child to age 18 means maneuvering him or her safely through more than 567 million seconds,” Ms. Andrews wrote. “And it only takes one of those seconds for something to go terribly awry.”

Most parents have experienced “that second when your attention is turned, and the child darts away,” Dr. Kurcinka said. “This mother probably started her day thinking, ‘I’m going to do something special for the kids today.’ She never imagined anything like this would happen.”