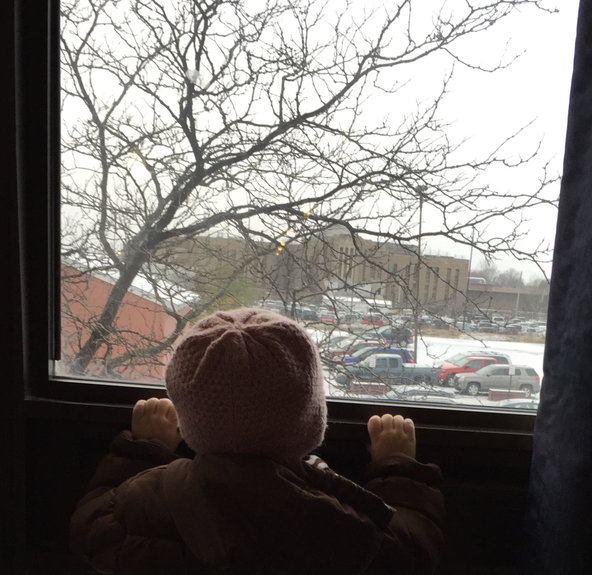 Morgan Gliedman’s 3-year-old daughter looking out a prison window on a visit with her father.Credit 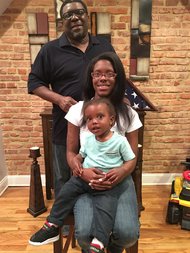 Derek Liggins with his daughter, Latasha, 28, and 1-year-old grandson, Landen.Credit

Morgan Gliedman’s 3-year-old daughter keeps a few pictures of her visits with her dad taped to the wall by her bed, and the rest in a little pink suitcase along with his letters.

She’s full of ideas for what she’ll do with him when his “time out” is over: camping, baking bread, reading bedtime stories. The earliest that can happen will be when she is in first grade, and he is eligible for parole from his seven-year-minimum prison sentence on criminal weapons charges.

She is just one of the five million American children who have had a parent incarcerated at some point in their lives. Her father’s sentence is hers, too.

The most obvious impact of having a parent incarcerated is the absence of that parent from a child’s day-to-day life. But a report released Monday by the Annie E. Casey Foundation describes the many other devastating ways parental incarceration affects families, children and communities, and recommends that courts and policymakers consider the needs of children of incarcerated parents when making decisions about sentencing, correctional facilities, rehabilitation and the financial burdens of incarceration.

The Casey Foundation points to research showing that children with an incarcerated parent tend to move frequently, and their family income drops when a parent, particularly a father, is incarcerated. The parent left behind, or the family member who steps in to care for a child, faces reduced earning potential and difficulties finding child care, even as debts and expenses associated with court and legal fees mount.

For Derek Liggins’s daughter, that family caregiver was her grandmother. When his daughter was 7, he said, he couldn’t handle being a single father and “a corner drug dealer.” The child’s grandmother took her in, but Mr. Liggins said he continued to provide some financial support. “I bought her all the extras,” he said, even though “her grandmother always said she didn’t need my help. Toys, clothes, tennis shoes — I made sure she had that stuff.” When he was arrested, that help disappeared — and regardless of the source of the income, its absence affected his daughter.

Those financial troubles can follow a family for years, as parents released from prison struggle to regain their footing in a community, sometimes burdened not just by the difficulties of finding a job when you have a criminal record, but by debt from unexpected sources, and limits on collecting benefits or finding housing.

Beyond the material effects, according to the Casey Foundation report, “having a parent incarcerated is a stressful, traumatic experience of the same magnitude as abuse, domestic violence and divorce.” Children lose a parent’s support suddenly, often unexpectedly and lastingly, and the challenges of keeping in touch with brief visits, letters and occasional phone calls can overwhelm a relationship.

“My daughter has been to visit her father at three different prisons,” the current one over four hours away, Ms. Gliedman said. She describes shared visiting rooms with a few worn toys and books, and corrections officers who reprimand young children for not sitting quietly at a table for a six-hour visit. Correction facility rules require that inmates and visitors accept seats assigned by guards for the duration of the visit, and any leeway given to children is discretionary. Some guards and prisons will permit children to sit in a parent’s lap, or let parents to move around the room with a toddler. Others will not, and a mistake can abruptly end the visit.

“There’s nothing to help these young children to understand and process what’s happening when parents are in and out of their lives,” said Joseph T. Jones, president of the Center for Urban Families in Baltimore, which offers programs that help formerly incarcerated men rejoin the work force, their families and the community.

The Casey Foundation report suggests that investing in programs designed to help children and families during a parent’s incarceration and then to ease a parent’s return could help equalize opportunities for the children of incarcerated parents. “A prison sentence for a parent shouldn’t be a life sentence for a family,” said Ryan Chao, the foundation’s vice president for civic sites and community change.

Those solutions start with counseling and help for the children left behind, and better programs to support their relationships with their parents during that incarceration. “We need a universal plan in place to assess what parental responsibilities someone has when they enter prison,” said Mr. Jones. “We should know if they have children, what their relationship is with them, what kind of financial support they provide, if they have child support debt.” Some prisons offer programs to encourage family relationships or the opportunity to video conference with children, but they vary widely. “It shouldn’t be dependent on the warden of each prison to decide if that’s worth having,” said Mr. Jones.

When parents are released from prison, the Casey Foundation suggests that they be helped to find employment and other ways to reconnect with their family and community. Mr. Liggins found such a program at the Center for Urban Families when he was released from prison at age 42. He earned a certificate in working on heating and cooling systems in prison, but emerged, he says, without the other skills he needed to get a job, or anyone willing to take a chance on someone with his record.

“I had a skill,” he said. “But I needed soft skills I didn’t even realize I didn’t have. Like smiling. That’s not something you walk around prison doing.” He found training through a program called Strive, which helps former prisoners to compete for jobs that can support a family.

Rich Beattie’s construction firm hired Mr. Liggins and has since hired more than a dozen graduates of the Strive program. “It’s not a handout,” said Mr. Beattie. “It’s good for business. These guys know how hard it is to get a job, and this is a good one. They don’t want to blow it.”

Programs that offer education and training in prison, and those that provide job-placement assistance upon release, decrease recidivism and better equip parents to return to their families. That kind of support, according to the Casey Foundation, can help lift children out of a cycle of prison and poverty, and build communities where that cycle is less likely to start again.

“Kids do better when families do better,” Mr. Chao said.