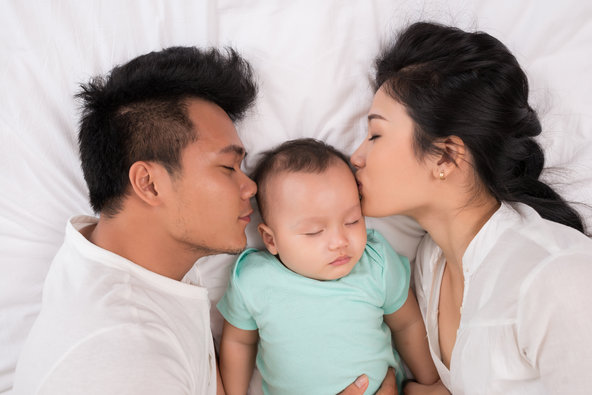 As new parents, Penn State researcher Doug Teti and his wife were co-sleepers, sharing their bed at night with all three of their children, now grown.

So when Dr. Teti, a professor of human development and family studies, embarked on an usual study of co-sleeping, bringing cameras into the bedrooms of 139 Pennsylvania couples, he did not expect to see co-sleeping associated with family stress. But to his surprise, many of the parents in the study who co-slept with their children beyond 6 months of age, a group he called “persistent co-sleepers,” did show signs of stress, particularly the mothers.

Dr. Teti emphasized that the research isn’t an indictment against co-sleeping, but does suggest that a number of factors, including cultural pressures and an unsupportive spouse, can make longer-term co-sleeping a more stressful experience for some families.

“Co-sleeping is simply a practice, just like solitary sleep is a practice,” he said. “It is important for parents to be on the same page about whatever practices with their children they choose to put into effect.”

The study, published this month in the journal Developmental Psychology, was unusual in that it tracked 139 couples, mostly married or living together, who generously allowed researchers to peek into their bedrooms with video cameras, recording nighttime interactions with their new babies at five time points in the first year of life.

Co-sleeping — defined in this study as room-sharing or bed-sharing, often a mix of the two — was surprisingly common in early infancy. Nearly 75 percent of the parents co-slept with infants early on, and about half were still co-sleeping three months after the birth. But once the babies reached 6 months of age, only one in four babies continued to share a bed or a room with their parents.

The practice of co-sleeping is controversial for both medical and cultural reasons. The American Academy of Pediatrics recommends room-sharing without bed-sharing as the safest sleep arrangement, but doesn’t say how long this arrangement should last. While family bed sharing is common in many parts of the world, the practice is generally frowned on in Western cultures, where children traditionally have been placed in cribs in separate rooms from parents.

The Penn State study found that, on average, mothers who co-slept past 6 months experienced more fragmented sleep, and they reported less satisfaction in their marriages and in how well they and their partners were working together as parents. Based on the videotapes, they also tended to be less sensitive and more irritable with their babies at bedtime. Notably, co-sleeping did not seem to disrupt the fathers’ sleep or decrease fathers’ ratings of marital and co-parenting satisfaction.

But those long-term co-sleeping mothers? Many were struggling, and they weren’t feeling supported.

If prolonged co-sleeping does contribute to family stress, this effect may be unique to the United States, or even the study population. “Half the world co-sleeps,” Dr. Teti said, and he suspected that the results would have been different in a country where co-sleeping is more mainstream, like Japan.

“It is more widely accepted, because both parents are on board with it, and because it is viewed in these cultures as good for the infant,” he said.

While some parents find co-sleeping helps to make nights with a baby more manageable, others find the constant caregiving and interrupted sleep to be exhausting.

Beth Day and her husband, of Seattle, slept in the same room with their son and found he started waking more and more frequently around 12 months. As soon as they moved him to his own room, he started sleeping through the night.

“Once I got my personal space back, my relationship with my kid and my husband improved immensely. I don’t think I realized how I had such a feeling of invaded personal space until it wasn’t any more,” Ms. Day said. Getting better sleep helped, too. With the fragmented nights of co-sleeping, “I was really irritable with my son and my husband, and didn’t have the energy to really play or interact” with her baby, she said.

One of the most common questions about co-sleeping is how it impacts a couple’s sex life. Parents say that when a baby is sleeping in the same room, maintaining intimacy can require creativity.

“We don’t have sex in our bed anymore, but there are other places to have sex,” said Leah Nilson of Vancouver, British Columbia. She and her husband have co-slept with their 2-year-old son from birth. “It has not negatively impacted our relationship in the slightest. Parenting in general has, but bed-sharing is one of the more pleasant aspects of parenting.”

And some families, Dr. Teti noted, were thriving with co-sleeping, but their experience was lost in the average of the group.

“We stressed in our paper that persistent co-sleeping may have been a marker of elevated family stress, not necessarily a cause,” he said. “The picture is complicated.”

In co-sleeping families struggling with sleep, Dr. Craig Canapari, medical director of the Yale Pediatric Sleep Center, often recommends moving the baby to a different room if possible. “It simplifies things in terms of everyone getting a better night’s sleep,” he said. However, he acknowledged that he sees families who are seeking help, not those for whom co-sleeping is working well.

In the study, the babies that co-slept through the first year were no more likely to be breast-fed than those who did not, and their sleep patterns were not different from babies who were moved to their own rooms by 6 months.

Dr. James McKenna, director of the Mother-Baby Behavioral Sleep Lab at the University of Notre Dame, who was not involved in the study, said he would like to know how long the mothers were away from their babies during the day, which might affect the decision to co-sleep.

Dr. McKenna was concerned that the findings might be too easily misinterpreted as “another strike against a good segment of moms who are perfectly happy doing what they do,” he said.

For co-sleeping to work well for a family, communication is the key, Dr. Teti believes. When deciding where the baby should sleep, he said, couples should ensure that “both members are on board, and they’re doing what they can to promote their own relationship in other ways.”