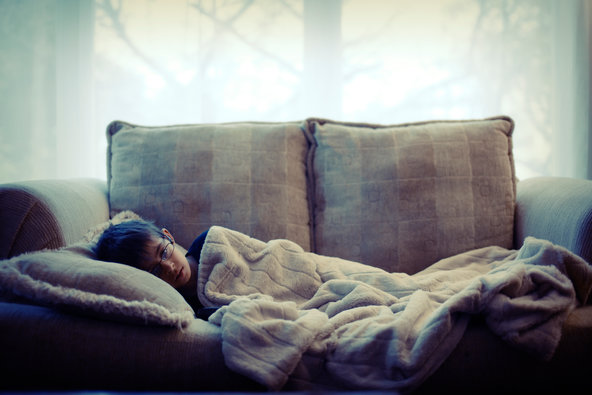 Sometimes, figuring out whether a child is too sick for school is an easy call. A vomiting child, or one with a fever or a raging case of pink eye, is clearly taking the day off. Some schools are even kind enough to spell out the parameters for a return to the classroom, asking that children stay home for 24 hours after the last symptoms or after starting a course of antibiotics.

Those are the easy cases. But at our house, which includes two adults and four kids, this year’s illnesses have not been so neatly categorized. Several of us have had nagging coughs of the deep, juicy, please-keep-that-away-from-me variety that dragged on for weeks. Others have complained of stomach misery, but never made use of the bucket next to the bed. We’ve had endless sniffles and endless debates about whether a child should just push through and go to school or stay home.

No one wants to infect an entire classroom. But we all know that there are times when even a child who isn’t feeling 100 percent really needs to grab the backpack and go.

The debate is complicated by the kind of child you have. Is your child a reluctant student at best, or a driven achiever who has to be forced to stay home? Unless it’s something readily detected, like a fever, “it’s very hard for me to tell if they’re just trying to get out of class,” said Kate Alexander, a school nurse in Saratoga Springs, N.Y. She has some “frequent flyers,” she says, who often just need a break from the classroom. But for those she doesn’t see often, she tries to work with the child to decide together whether he or she can go back to class.

As a parent, I find that a challenge as well. My kids are 9, 10, 11 and 14, with varying degrees of enthusiasm about school attendance. When one of my children didn’t get enough sleep and insists that he or she doesn’t feel well at the 6:20 Monday morning wake-up, it’s probably true, but is a “rest day” warranted?

“Some kids say, ‘I have a cold,’ and I say, ‘that’s O.K., you can have a cold and still be here,’” said Ms. Alexander. Her response depends in part on age. “A kindergartner with a cold really can’t do anything. As they get older, that changes. By the time they get to fifth grade I’m trying to toughen them up. I have to say, in a very nice way, I know you don’t feel your best but you need to be here.”

How do we toughen up our children just enough that they become adults who can power through a cold, but aren’t putting everyone at risk of the flu in the mistaken belief that it’s never an option to stay home?

“I try to push, a little bit, in the sense that if the kid were just given their own choice, they probably wouldn’t go,” says Angela Duckworth, author of the forthcoming book “Grit: The Power of Passion and Perseverance” and a researcher and psychology professor at the University of Pennsylvania. “They need to learn to be comfortable being a little bit uncomfortable.”

Learning to find that space where a child is “a little uncomfortable” but not putting herself or others at risk helps a child learn to expand her “distress tolerance” in other areas, says Dr. Duckworth. “Most kids will not be able on their own to make the generalization, well, I went to school when I wasn’t feeling great, I can also struggle a little bit in my math class when I’m not feeling great. I can handle it. This isn’t just being sick, this is dealing with a challenge.”

Those choices don’t just affect our children, but the way others view them. Miss the first few days of class for illness, and you may find yourself struggling to overcome a reputation as a slacker for an entire semester. Show up and perform even though it’s tough, and you have a teacher (or, in later years, a boss) who knows that when you call in sick, it’s real. That’s a lesson children need to learn.

The initial choice to go to school or stay home, though, is still not an easy one. As a nurse, Ms. Alexander suggests setting parameters that are similar to those the school uses, and sticking to them. “Toe a tough line,” she says. “No fever, no vomiting, off you go.” Talk to the school nurse about your concerns, she says, and try to agree that the nurse will send the child back to class if at all possible. And when a child does stay home, “I wouldn’t make it fun,” she says. “They’re going to rest and not just watch TV or play games all day.”

Teachers, nurses and parents can disagree on when a child should stay at school. “I’ve encountered many situations where teachers want to send students home in fear of contaminating others,” said Bonnie Lee, a school nurse at an elementary school in Edenton, N.C. By doing “a thorough nursing assessment, and utilizing evidence-based practice guidelines,” she often finds that the student is able to remain in class. Adrian Wood, a parent in the same school district, says that keeping her elementary school-aged children home sometimes results in “a stern letter regarding the importance of attendance.”

Of course, for some families, being able to keep a child home is a luxury. Ms. Lee says she sometimes sees children come to school with a high fever, and is unable to reach an adult to come to take the child home, or has parents tell her that they can’t leave a work shift to pick up a child having an asthma attack. In her view — and mine — the children whose parents can afford to weigh the risks and benefits of coddling versus grit are the lucky ones.