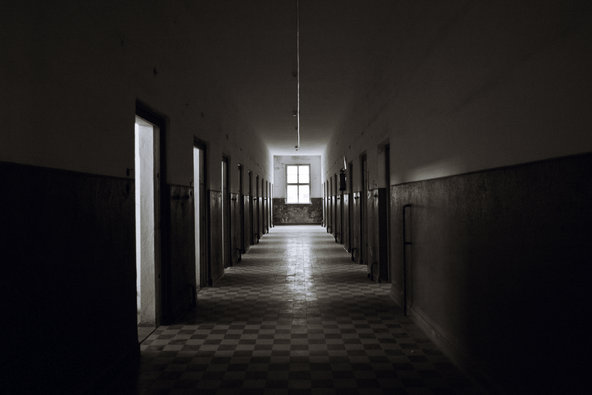 Michael (not his real name) had an entourage the second he walked in the door. His ankles were shackled to the bed. Police officers, nurses and sheriff’s deputies surrounded him. His blood pressure had been dangerously high and he was admitted to my service. Why was he in custody? People whispered softly as the collective speculation permeated the hallways. Was it armed robbery or murder? It shouldn’t have mattered — we are supposed to treat everyone the same. But it did.

Michael was also vomiting, having diarrhea and crying: signs of opiate withdrawal. He was homeless and had lost a lot of weight while living on the streets. In many ways, he was like other patients I had cared for. Except that his hospital room became the jurisdiction of the law enforcement agency.

Every time we spoke, a third body impinged upon our patient-doctor relationship. I took an oath to protect patient confidentiality, yet every guard knew the intimate details of Michael’s medical history, including his H.I.V. status. I felt myself whispering to protect whatever shred of dignity remained.

I assumed we were following the rules; I just did not know what they were. I had been a doctor for three months, but like most doctors had never received any training on the care of prisoners. Only after intensive searching on our hospital website was I able to find our hospital’s policies, months after Michael was discharged. As doctors, we expect black and white, but even those policies seemed open to interpretation.

Law enforcement officers have a legal right to remain with the patient during examination and emergency treatment. At the patient’s request, given his right to confidentiality, the officers can remove themselves from hearing range of the conversation. Michael was never a threat to my security. Yet it took me a few days to ask the police officers to stand by the door. When I did, I met resistance.

According to the American Medical Association, physicians should avoid situations in which the presence of an outside observer will influence medical intervention and compromise care. The policies of the British Medical Association advocate that patients should be examined and treated without restraints or prison officials present unless there is a security or escape risk.

One day I suggested to Michael that he relax and watch some television. But, I was told, he was not permitted to watch TV. Meanwhile, I watched as two policemen 10 feet away stared at the television screen in front of them. I understood the precautions, restraints and supervision, even the plastic utensils with the goal of protecting me, other members of the health care team, and other patients. The television restriction seemed unnecessarily punitive.

I was told by some friends that my sympathy for Michael was misplaced. Some reminded me that this was the path Michael chose for himself. Maybe I just convinced myself that I could help him, he just needed to be given the right care.

I ordered nicotine patches as well as various anti-nausea, anti-diarrheal, and anti-anxiety medications to ease his discomfort. A medication called clonidine lowered his blood pressure.

A few days later, the nurse paged me and told me Michael had asked for me. “Can you call for my bail, Doc?” he asked. My intern brain was full of how to read electrocardiograms, management of angina and diuretic doses; I knew nothing of bail.

He gave me the names of three people to call in a very specific order. He repeated himself again to ensure my comprehension. I nodded, stepped outside and looked at my long list of tasks for the afternoon.

I started to dial the first number before stopping myself. Was this crossing boundaries? I called several social workers, care coordinators and administrators in the hospital. None of us, I learned, was allowed to call for Michael’s bail; he had to call himself. And yet, he had no telephone privileges.

Michael did not make bail. I prescribed a blood pressure medication for him to take after discharge and sent an extra prescription to the outpatient pharmacy to fill. On the day of discharge, I walked into Michael’s room armed with the plastic pill bottle.

“He can’t take that,” the sheriff said. “It will be thrown out the second he gets to the prison.” I wasn’t even allowed to tell him the date and time of his follow-up appointment, a decision determined on a case-by-case basis by the law enforcement officials.

Michael could see the disappointment on my face. “Why don’t you hold on to it, Doc?” he said. “I’m gonna be seeing you in clinic, right?” I told him he would, although I knew that with my training rotations it was unlikely I would see Michael again.

I will never know why I felt so strongly about his case. Perhaps it was the injustice of the system, his poverty and need for survival that trapped him in a life of crime. Or maybe it was the yearning we have as physicians to fix the unfixable.

Research into professional conduct and treatment of prisoners as patients in the hospital is lacking. In one questionnaire of 184 physicians, 181 were unaware of any guidelines in place for treatment of prisoners, even though almost all of them had taken care of prisoners at some stage in their careers. Only seven of the doctors always asked the prison officer to leave the room; 108 sometimes did. Breaches of confidentiality were common.

Routine training in the care of prisoners should be incorporated into medical training programs. These policies should be distributed to the multidisciplinary health care team and reinforced at the time of admission. Partnerships between academic medical centers and correctional facilities have also been proposed to help expose doctors-in-training to prison health and help people like Michael establish consistent follow-up care.

When I look at his prescription bottle collecting dust in my office, I wonder if things with Michael might have been different if I just knew what was black and white and what was gray.

Ersilia M. DeFilippis is a resident in internal medicine at Brigham and Women’s Hospital in Boston.