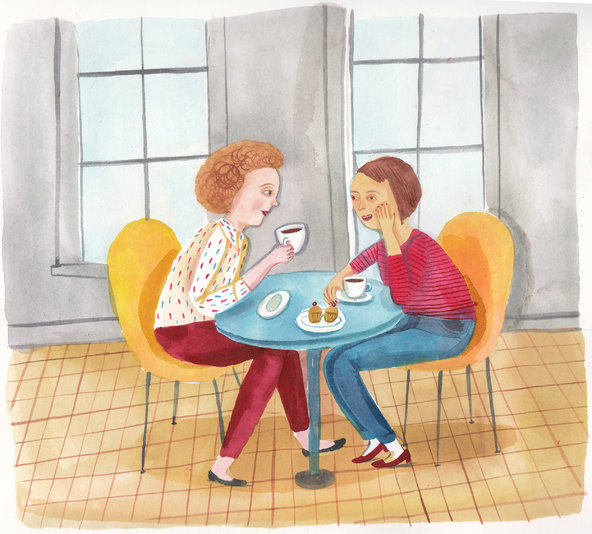 “My friends are the sisters I was meant to have,” a woman told me. Another said that her friends are more precious than her sisters because they remember things from her past that her sisters don’t and can’t, since they weren’t there. And a man commented that he didn’t enjoy a particular friend’s company all that much, but it was beside the point: “He’s family.”

I interviewed over 80 people for a book I’m writing about friendship, and was struck by how many said that one or another friend is “like family.”

These comments, and how people explained them, shed light on the nature of friendship, the nature of family, and something that lies at the heart of both: what it means to be close.

For friends, as for family, “close” is the holy grail of relationships. (In both contexts I often heard, “I wish we were closer” but never “I wish we weren’t so close.”)

What people meant by “close” could be very different, but their comments all helped me understand how friends could be like family – and why I often say of my friend Karl, “He’s like my brother.” First is longevity. We met at summer camp when I’d just turned 15, and the seeds of closeness were planted during one of those wondrous extended self-revealing teenage conversations, when we sat side by side behind the dining hall. Our friendship continued and deepened as we exchanged long letters that traversed the distance between our homes in Brooklyn and the Bronx.

After college, Karl was the one I called at 2 a.m. when I made a last-minute decision not to join the Peace Corps. Two decades later, we were traveling together when I showed him the photograph of a man I’d just met, saying, “It’s crazy but I keep thinking I’m going to marry him” – and I did.

I was there when Karl left Brown for Julliard, and, years later, when he came out as gay. Karl knew my parents, my cousins, my first husband and the other friends who have been important in my life, as I knew and know his. I visit his mother in a nursing home just as I’d visit my own, were she still alive. We can refer to anything and anyone in our pasts without having to explain.

If I’m upset about something, I call him; I trust his judgment, though I might not always follow his advice. And finally, maybe most of all, there’s comfort. I feel completely comfortable in his home, and when I’m around him, I can be completely and unselfconsciously myself.

It’s not that we don’t get on each other’s nerves. It’s that we do. A cartoon about a married couple could have been about us: A woman standing in the kitchen is saying to the man before her, “Is there anything else I can do wrong for you?” I sometimes feel that whatever I do within Karl’s view, he’ll suggest I do a different way.

All the elements making our friendship so close that Karl is like a brother were threaded through the accounts of people I interviewed. “We’re close” could mean they talk about anything; or that they see each other often; or that, though they don’t see each other often, when they do, it’s as though no time has passed: they just pick up where they left off. And sometimes “close” meant none of the above, but that they have a special connection, a connection of the heart.

Many grown children continue to wish that their parents or siblings could see them for who they really are, not who they wish them to be. This goal can be realized in friendship. “She gets me,” a woman said of a friend. “When I’m with her I can be myself.”

It would be easy to idealize family-like friendship as all satisfaction and cheer. And maybe for some lucky people it is. But friends can also resemble family by driving you crazy in similar ways. Why does she insist on washing dishes by hand when dishwashers do a better job of killing germs? Why does he always come exactly five minutes late?

Just as with literal families, friends who are like family can bring not only happiness but also pain, because the comfort of a close bond can sometimes morph into the restraints of bondage. The closer the bond, the greater the power to hurt – by disappointing, letting you down or, the ultimate betrayal, by dying. When a friend dies, a part of you dies, too, as you lose forever the experiences, the jokes, the references that you shared. A woman in her 70s who was mourning her lifelong best friend said the worst part was not being able to call her up and tell her how terrible she felt about her dying.

Sometimes we come to see friends as family because members of the family we grew up with live far away or feel too different, or are just too difficult to deal with. A woman who ended all contact with a sister explained that the option of cutting off a family member who brings you grief is a modern liberation, like the freedom to choose a spouse or divorce one. Holes left by rejected (or rejecting) relatives — or left by relatives lost to distance, death or circumstance — can be filled by friends who are like family. But family-like friends don’t have to be filling holes at all. Like my friend Karl, they can simply add richness, joy and, yes, at times, aggravation, that a literal family – in my case, two sisters I’m very close to — also provides.

Deborah Tannen is a professor of linguistics at Georgetown University and the author of “You Just Don’t Understand!” and “You’re Wearing THAT?”.