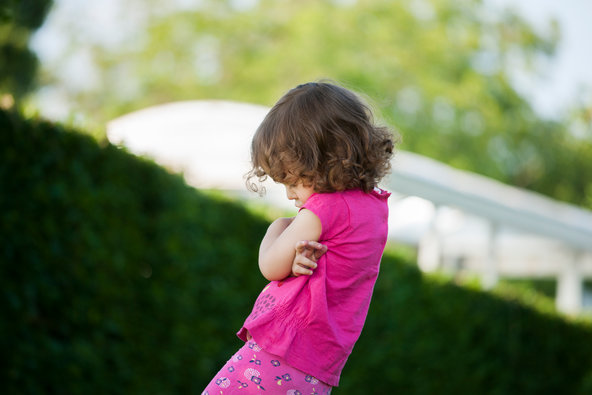 As soon as Kristina Dooley’s 5-year-old triplets see an elevator, they race to be the one who gets there first.

“When they get to the buttons, elbows start flying,” she says. Almost immediately, she hears the complaint “That’s not fair!” from the child who doesn’t get to hit a button.

A child’s list of things that are “not fair” is seemingly endless. Whether it’s elevator buttons, equal piles of goldfish crackers, who gets the first bedtime kiss or who gets to use the precious purple cup, children demand precision equality that seems impossible to achieve most of the time.

But research suggests that humans evolved to want fair treatment — an expectation that other social animals share. In a now famous study, a capuchin monkey rewarded for a task with a piece of tasty cucumber was pleased, until she saw one of her peers rewarded for the same task with a tasty grape. The reaction may be familiar to parents. The monkey throws the cucumber at her handler and rattles the cage in anger.

In humans, the desire to be treated fairly starts early. Researchers have found that children as young as 19 months seem to understand the concept of fairness, and appear surprised by scenes of blatant favoritism – such as when one puppet is given toys and another puppet goes without. By age 7, some children will choose to forgo candy rather than get a significantly larger share than others.

“The question of jealousy is easy — in any kind of group living, you have to be careful that somebody else isn’t getting more than you,” said Paul Raeburn, a co-author of “The Game Theorist’s Guide to Parenting.”

The desire not to have more than others can also be explained. In a hunter-gatherer society where conditions of scarcity arise frequently, sharing food when you have more increases the likelihood that others will share when you have less. “The presumption is that it gave some ancestor an evolutionary advantage,” he said.

Given that a child’s desire for life to be fair seems to be hard wired, it’s better not to fight it, says Mr. Raeburn. Instead, he suggests applying classic game theory strategies to help children make “fair” decisions and stop the squabbling. They include:

I Cut, You Pick: This classic strategy for dividing simple things, like cake, allows each child to make a choice: One divides the desired good, and the other chooses. I Cut, You Pick has limits, says Mr. Raeburn, if the thing to be divided has a different value to each child, or if there are more than two children with an interest. But if nothing else, it works well for cake.

Tit for Tat:When children are faced with the job of cleaning up a joint mess, suggest “you pick up one, then he picks up one,” said Mr. Raeburn. “We had mixed results with Tit for Tat,” he admits. His 9-year-old son was able to manipulate his 6-year-old brother into doing more. “This probably works better with children who are closer in age, or at least both over 7.”

Random Dictator: In Random Dictator, a family faced with a choice that affects every family member (what movie to watch, what cereal to buy, which restaurant to go to) has each family member write down a selection, then draws a single one from a hat. One person ultimately chooses — but who “wins” is random.

Auction: How to decide who chooses the one show that will be watched tonight or gets first play on the iPad on a road trip? Try auctioning the desired reward to the highest bidder, using chores, other privileges or even Halloween candy as currency. “This involves some learning,” said Mr. Raeburn. “It’s easy for a child to overvalue something in the moment and get stuck doing way too many chores.” At first, he says, parents might have to monitor the fairness of the auction process itself — but children who like it may end up running auctions on their own.

Even if you adopt these strategies, chances are that some things will always feel “not fair” to kids.

“Don’t react defensively,” says Laura Markham, author of “Peaceful Parent, Happy Siblings.” Parents have to recognize that sometimes, no matter how logical the division of everything from elevator buttons to our time and attention seems to us, one child feels less loved. Even grown-ups know it’s hard when someone else gets a gift you wanted, or more ice cream on their cone. Find words that acknowledge the child’s perspective.

“Try focusing on whether you’re meeting their individual needs instead of worrying whether each one is getting the exact same thing at the exact same time,” Dr. Markham said. “When we’re always busy with the baby, or something like that, it really rankles.”