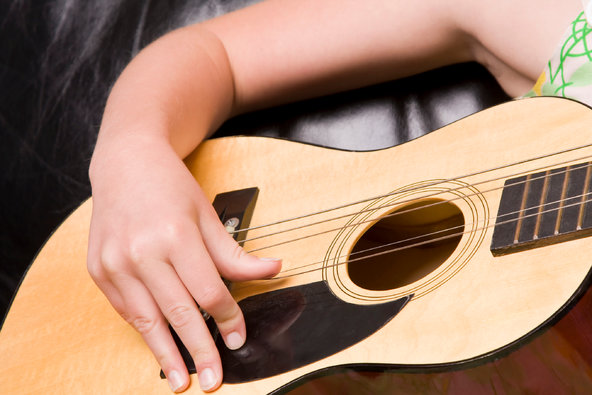 It should have been a simple enough request. My 10-year-old, after several years of piano and voice lessons, had asked for a guitar.

But what to buy? I posed the question to my Facebook friends. Full-size or smaller? Acoustic or electric?

A couple of guys from the best campus band from my college days suggested the Baby Taylor, a three-quarter size (also known as parlor-size) acoustic guitar made by the El Cajon, Calif., company that the likes of Taylor Swift and Jason Mraz count on for instruments. A new one generally sells for around $329.

But then I heard from my friend Craig Bromberg, the father of 11-year-old guitar-playing twins and a serious musician himself. He let me have it for even considering buying a brand-new guitar. “I for one can’t stand the idea of kids with fancy instruments before they have even taken a single lesson,” he wrote.

He had a point. I’ve devoted a decent chunk of my professional life of late to trying to talk parents who have more money than average out of overindulging their kids. When it comes to cars, a shiny used one is generally the best choice. As for fancy mobile phones, get a dumb phone with basic voice and text service or let them pay the difference between that and the roving Internet access and shiny hardware they crave.

But musical instruments (of all sorts – not just guitars) are tools for learning, and that makes them different from cars or phones. Many forms of athletic gear for older children – tennis rackets, lacrosse sticks, gloves for baseball or softball – are similar. Even so, I realized that in considering my child’s request for a guitar, I got caught up in all the usual aspirations we have for our children, as well as my own memories and regrets about my musical training.

The lesson: We ought to put every object of child desire through its own wants-versus-needs test, one that inevitably ends with a question about how much is enough.

When I called up the people at Taylor Guitars to ask them how much guitar a 10-year-old truly needs, they put me in touch with Andy Powers, who is in charge of guitar design for the company. A parent and former guitar teacher himself, he does not necessarily default to his own company’s instruments when recommending a first guitar to other parents.

“I say that the first thing we want to do is get the kids an electric guitar,” he said, because electric guitars are often easier for beginners to play. His company doesn’t make very many of them and none at the entry level.

And he offered advice for helping a child stick with the instrument. “The first thing you want to teach them is their very favorite song,” he advised.

But how much should you actually spend? Mr. Powers outlined the two approaches he hears about most often. The delayed gratification theory has children doing the hard things first. You study, practice and bear with it, and then you get the nice guitar. The other is instant gratification – buy the nice guitar to start to make learning the guitar enjoyable as soon as possible.

Mr. Powers advised against the delayed gratification approach because it could sabotage the child’s learning. “The least enjoyable part is the moment you first pick it up,” he said. “You’re physically struggling with an instrument that you don’t know much about.”

And for a child like mine who wants to play acoustic, he couldn’t help but wax eloquent on the virtues of the Baby Taylor’s function over form: its intonation, seasoning and repairability. I know a bit about music and caught his drift, but I wasn’t sure his arguments would pass muster with every parent.

I took his comments back to my friend Craig. He reminded me that most famous musicians did not learn to play on top-of-the-line equipment. And while the Baby Taylor is portable (which is why many adults love owning it too), he wondered whether we’d be inclined to tote it around given its price and the possibility of damaging it.

My wife asked another question that I hadn’t thought of: Why not buy our daughter the cheap guitar (or at least a decent but lower-priced used one), and spend more on a really great teacher or a larger number of initial lessons? It’s an excellent question, if only we knew which style of teaching would be best for her. Picking out an instrument seems easier somehow.

One of Craig’s most recent musical purchases for one of his sons was a used instrument. Indeed, buying someone else’s Baby Taylor would set us back only $200 to $250. Older ones seem to hold their value reasonably well, which means we could hock ours if my daughter doesn’t take to playing or graduates to a bigger guitar within a few years. Craig said he did not find this approach overly indulgent.

And to Mr. Powers at Taylor, who has made music his life’s work, the choice of instrument is one with the highest of stakes, as he’s not sure he would have stuck with it if he had been learning on a glorified toy. “The difference between that person who says ‘Oh yes, I took lessons when I was a kid’ and someone who engages forever is when they cross over from studying to doing an instrument,” he said.

I do want my daughter to play on a guitar that gives her the best chance of crossing that chasm. But my hunch is this: It wouldn’t have taken $329 to get me to “do guitar,” had anyone thought to suggest it when I quit classical piano lessons after 10 years.

And perhaps that’s one more reason I find the used Taylor — which we’re now in the process of hunting down, at $100 or so off the new price — so enticing. If my daughter doesn’t stick with guitar, I just may keep her instrument for myself.