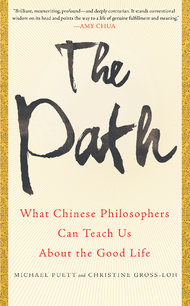 Here’s the conventional wisdom about raising kids in modern-day America. Teach them to know who they are. Encourage them to think big and to aim high. Show them how to play to their strengths and plan a route to future success.

But there is a better way to turn a child into a flourishing adult, one based on just about the opposite of everything we think we should do. This “new” way is actually very old – over 2,000 years old — and is inspired by the wisdom of Chinese philosophers including Mencius, Confucius and Laotzu.

Consider what they might say if they were raising today’s children:

Stop Looking For Your Passion

I used to believe that even in infancy, I could get a sense of my four children’s personalities in order to raise them the way that was best for them. Cultural mores reinforce the notion that self-exploration is important, especially in adolescence, when teenagers are figuring out who they are. By the time they fill out the Common Application for college admissions, they’ve learned how to distill the core of themselves into 650 words. And central to that core identity is their passion, or what makes them unique.

But Chinese philosophy has taught me that that seeking who you are and what you love is dangerous. When you look within to identify yourself, including your proclivities, your strengths and your passions, what you’re really seeing is a snapshot in time. When I encourage my children to figure out who they are and to be true to that, I am limiting them to who they think they are at this moment, without understanding how much people change.

Chinese philosophers correctly described human beings as complex, multifaceted beings bumping up against other complex, multifaceted beings all day long. We shift in every interaction and every experience and are developing all the time. I am now trying to teach my children to see themselves as endlessly fluid people who have the ability to develop new interests and to change.

We raise our children to be sincere, to express themselves honestly, to be in touch with their deep and true emotions, and to have a healthy skepticism for anyone or anything that seems “fake.” But the Chinese philosophers knew that playing pretend serves an important purpose, not just in childhood but for adults as well.

Pretending to be other than who we really think we are is similar to a Confucian “as if” ritual. These are the daily moments during which we briefly become a different person, like when I greet an acquaintance on the street with a smile even though I was just fretting over a difficult conversation I had with a colleague. By viewing these small “as if” moments as an exercise in breaking from who we think we authentically are or what we are sincerely feeling in that moment, I am not just teaching my children to be polite or nice. I’m teaching them not to fall into the trap of always being true to who they are.

Live Life as a Series of Ruptures

As children learn what they are good at and what they aren’t, what they love and what they don’t, they gradually winnow out the things that seem irrelevant and uninteresting. My oldest plays soccer and reads history books, and no longer has time to explore drama. And who can blame him? In an increasingly pressurized and anxiety-ridden environment, playing to your strengths seems like the most sensible and efficient way to head into a future career.

As I read Mencius’s writings, I had an epiphany: how efficient is it, really, to make firm plans for a future career, only to have to shift gears years from now when you wake up and find you are living a life that is the result of decisions made by the person you were at only 17 years old?

See the Merits of Self Restraint

American education, with its focus on class participation and its valorization of extroverted leaders, socializes our kids into becoming proactive, expressive and assertive learners. Our children learn that the self-advocate, the one who puts himself out there, is more likely to garner club leaderships and glowing teacher recommendations, thus setting him or her on the path to future success.

But when we emphasize self-assertion, our kids become trained to always see situations in terms of power balances, to calculate how they can jump in to any situation to show the world who they are. This sort of training cuts directly against the Chinese philosopher Laotzu’s concept of “strength through (seeming) weakness,” which rests on the basic truth that human beings are all affected by one another. A self-aggrandizing but clueless student fails to recognize how his actions breed irritation, resentment or even contempt from fellow classmates. But there is an advantage in being someone who is not always trying to dominate the room.

While I once worried that my children’s quieter natures would prevent them from being seen as equal players on life’s stage and fretted over how to teach them to be more assertive and stand up for themselves more, I teach them differently now. I tell them that the greatest impact can be had when they understand how to shift situations by paying attention to the emotions and relationships that undergird every situation.

Attend to the Mundane

The Chinese philosophers saw the world as one of endless, shifting relationships. That’s why they emphasized that we have influence over the trajectory of our lives when we focus not on who we are, our plans for the future, and self-assertion, but on learning how to relate well to others.

Caring for one another is hard work. It requires endless awareness, adaptation and responsiveness. But it is one of the most important and rewarding things we do. This is not just how our children will become better people and live better lives. It is how they can create a better world.

Christine Gross-Loh is the co-author, with Michael Puett, of “The Path: What Chinese Philosophers Can Teach Us About the Good Life,” from which this essay is adapted.