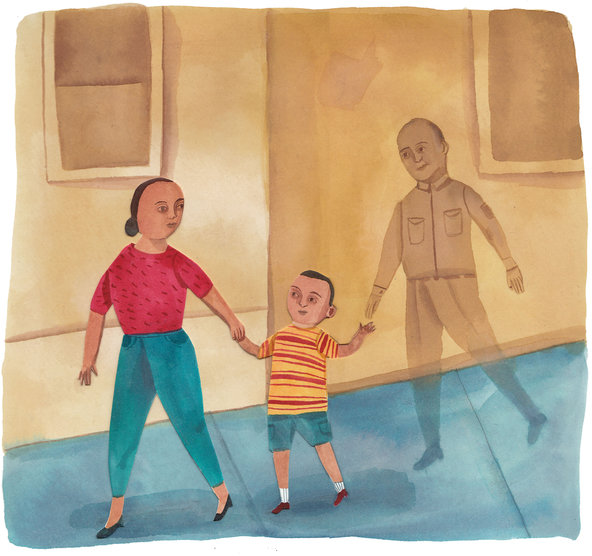 I am still not sure what hits me the hardest, Father’s Day, his birthday or the anniversary of his death. At least Memorial Day brings pride with the pain.

My son and I lost our soldier, First Sgt. Charles Monroe King, in October 2006, just 30 days before he was due to come home from a yearlong tour of duty in the United States Army in Iraq. The improvised explosive device that detonated under his armored military vehicle shattered his body and our lives. Jordan was just 6 months old and met his father only once, during a two-week leave from the war.

Since then, we have lived through nearly a decade of his absence – from parent-teacher conferences, from holiday dinners, from trips (thankfully few) to the emergency room. And yet I still think of us as an intact family.

We are not whole in the traditional sense, of course. I am a single mother of a now 10-year-old boy who has his father’s soldier-straight posture and sensitive soul. But like many other military widows and partners who have experienced war’s ultimate wrath, I sometimes struggle with a compulsion to defend my soldier’s place in our family to anyone who might assume he is gone because of infidelity, abuse or neglect.

One Mother’s Day a few years ago, my son and I went alone to our favorite neighborhood diner. The owner handed him a rose to give me, escorted us to a cozy table near an open window and offered me a complimentary glass of Champagne. Jordan toasted me with his Shirley Temple and handed me the flower. I had tucked money into his pants pocket before we arrived because he wanted to be able to pay the bill for his chicken fingers and my pasta.

We seemed to draw attention, and not just because we were the only African-American family in the restaurant. People smiled watching my sweet little gentleman being so attentive at our table set for two. I was proud but also self-conscious. Was I imagining the pitying glances from a few of the diners who seemed to notice that no father had joined us by the end of our meal?

“No, it’s not what you think,” I wanted to shout. “I am not a stereotypical black woman who got knocked up and has been left alone to raise yet another fatherless black boy. We planned my pregnancy and loved our baby and each other.”

You don’t have to be black or a woman to want to shout out about why your soldier is not there. I am sure that many military spouses and partners of all kinds have felt the same need when they arrive alone for parents’ day at summer camp or during spring break vacations. But I am particularly sensitive about how our family structure might appear because of the disproportionate number of single mothers who look like me.

The truth is, most people are probably too consumed with their own lives to care much about mine. And of course there are many other single parents doing their best to raise their children on their own. It’s just that I want people to somehow know our reality as a reminder that everyone who died in service to our country deserves their respect — and so do the people who loved them.

I want them to know that Charles would have been retired by now and probably coaching Jordan on a flag football team. He would have been the one to take care of the back-to-school medical forms that I turned in almost a month late. I know he would have remembered Mother’s Day.

We will always feel the void that Charles left, but after so many years without him we are finally happy. We spend summer weekends on the Jersey Shore. We host about 25 relatives and friends at our annual Christmas dinner. I no longer feel guilty when I go out for an evening of grown-up conversation and companionship.

But there are still moments when I am nearly overcome with fear about how I will manage to keep our family thriving. The anxiety seems to grip me most on stormy nights, when the wind is howling and thunder cracks in the distance.

As I watch over my son sleeping sound and snug on those nights, I know that he is bathed, his belly is full and he is safe. And yet, it is when the storms seem to be bearing down on us that I have my doubts about how I will continue to manage the responsibilities of two parents.

I was having just such a moment a few weeks ago when Jordan and I were saying our bedtime prayers. I asked God to please help me to successfully raise this child.

Sensing my anxiety, Jordan hugged me after we prayed. “Don’t worry, Mom,” he said. “I’ll help you raise me.”

Dana Canedy is a senior editor at The New York Times and the author of the memoir “A Journal for Jordan.”