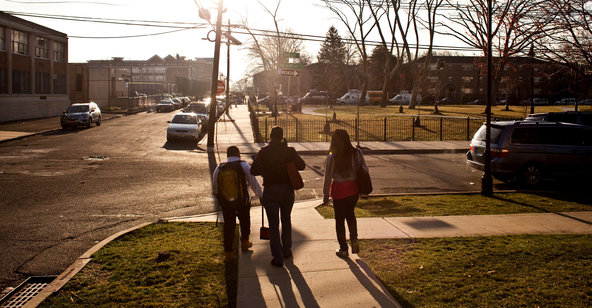 Neighborhoods designed for walking may decrease the rates of being overweight or obese and having diabetes by more than 10 percent, a new study concludes.

Canadian researchers studied more than three million people in 8,777 neighborhoods in urbanized areas of Ontario, ranking them for “walkability” on a 100-point scale that measures population density, numbers of facilities within walking distance of residences and how well connected their webs of streets are.

The study, published in JAMA, adjusted for age, sex, income and other factors, and found that the prevalence of being overweight and obese was more than 10 percent lower in the one-fifth of neighborhoods rated highest for walkability than in the one-fifth rated lowest. Over the 12-year study period, being obese and overweight increased by as much as 9.2 percent in the three-fifths of neighborhoods rated lowest, with no change in the two-fifths rated highest.

The incidence of diabetes was also lowest in the most walkable neighborhoods, a difference that persisted throughout the study.

The authors acknowledge that this was not a randomized trial and does not prove causation. Still, the senior author, Dr. Gillian L. Booth, a physician at St. Michael’s Hospital in Toronto, said that the healthiest neighborhoods seem to be those where cars are not a necessity.

“Walking, cycling and public transit rates were much higher in walkable neighborhoods,” she said, “and that leads to better health outcomes.”