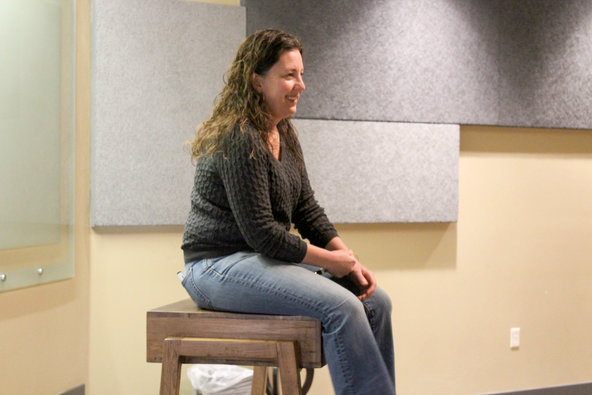 There was no reason for Jennifer Morton to move to Utah, except one: It was the place she lost 40 pounds.

In 2009, Ms. Morton was working 90-hour weeks as the director of learning at a large company outside Louisville, Ky. She traveled 80 percent of the time, and her weight shot up. Panicked and exhausted, she quit her job and checked into Fitness Ridge (now called Movara Fitness Resort), a weight-loss and fitness retreat in southern Utah.

She ended up staying a month.

Five weeks later, it really was: She packed up her belongings and settled into a house less than a mile from the resort in the town of St. George. Not long after, she began teaching classes at Movara on emotional eating and food addiction, guiding clients through their own body battles.

“It just made sense to do this,” Ms. Morton said. The low cost of living was appealing, as was the natural beauty. But most importantly, she could continue the healthy lifestyle she had embraced.

“At the resort, the way you feel about who you are is so important to protect that you’re willing to stay in that environment to make sure it sticks,” said Ms. Morton, who began doing triathlons after her stay. “If you find your best self somewhere, you definitely don’t want to leave it.”

People like Ms. Morton are adopting a model familiar to those fighting substance abuse, who are often encouraged to change their environments and relationships post-rehab in order to “stay clean.” (Minnesota, for example, is half-jokingly referred to as “Minnesober” because of the large number of rehab centers there and the many people in various stages of recovery, who often remain in the state after treatment.)

“Addiction is a lifelong problem that people have to deal with, and it’s the same with weight,” said Dr. William Yancy, director of the Duke Diet and Fitness Center in Durham, N.C. “Even if they reach their goal, it’s something they need help and support with.”

“It speaks to the power of the proverbial ‘toxic food environment,’” said David Sarwer, director of the Center for Obesity Research and Education at Temple University’s College of Public Health. “When we’re in our normal day-to-day routines, and those routines have become second nature to us, there are countless negative influences on our eating habits and sedentary behavior that contributes to weight gain.”

Relocating, he said, offers an opportunity to create new habits. “In these cases, people have the opportunity to make a significant commitment to health and well-being to live in a geographical location that promotes health,” he said.

From 2007 to 2012, Marjorie S. Fine went twice a year to the Duke diet and fitness program. She would lose about 30 pounds during her two-month stay, and regain half when she returned home to Miami. “I would chip away at the weight, but never really be anywhere near 99 percent successful,” said Ms. Fine, 69.

Late in 2015, she and her husband moved full-time to Durham (once called the “diet capital of the world” because of the number of weight-loss facilities there). She exercises and eats lunch at Structure House, a residential program in town, six days a week, and attends individual therapy and weekly Overeaters Anonymous meetings there.

“As with any other addiction, you have to work on it on a daily basis,” said Ms. Fine, who has now lost 65 pounds and hopes to lose another 40.

“It’s very important to have that shared experience and problem solve together,” said Catherine J. Metzgar of the University of Illinois at Urbana-Champaign, the lead author of a study that found social support and being accountable to others helped some women lose and maintain weight loss. “Having your family and others in your social circle buy into what you are doing is also important.”

Cindy MacKenzie, 62, a former teacher and self-described yo-yo dieter, retired with her husband in 2015 to southern Utah. The couple purchased a home about a five-minute drive down the road from Movara, where Ms. MacKenzie used to go for annual weight-loss visits.

“We have definitely bought into the program,” said Ms. MacKenzie, who still regularly attends the resort. Back in Silicon Valley, where they used to live, “we would go out to eat all the time, we would drink. Here, there are no threats, no temptations.”

“If you’re living in a community where every single one of your friends and family members is devoted to overeating and an unhealthy lifestyle or to misusing various drugs and alcohol, it’s really hard to change in that environment,” said Maia Szalavitz, a former heroin and cocaine addict and author of the book “Unbroken Brain: A Revolutionary New Way of Understanding Addiction.”

On the other hand, surrounding yourself with too many people with similar issues can be risky. “A lot of people get into a very closed world that’s kind of limited,” she said. “Sometimes you make each other better, and sometimes worse.”

Of course, most of us cannot afford to uproot our families, lives and jobs in the name of healthy living. (Structure House’s base price for new participants, for example, is $10,500 for a four-week stay.) And even if we could, we bring our struggles with us. (In bumper sticker terms: “Wherever you go, there you are.” )

Jean Anspaugh, 62, lost 100 pounds at the Rice House program in Durham, where she stayed for seven years, renting an apartment nearby and taking odd jobs to pay the costs. She figured she would “stay thin forever.” But she didn’t. Work, bills and relationships took their toll, and she got “mainstreamed back into the dominant culture, which eats all the time.”

“Nobody realizes how hard it is to lose weight and keep it off,” said Ms. Anspaugh, a folklorist in Fairfax, Va., and author of “Fat Like Us.” “It’s a full-time job.” She has regained some of the weight but still feels that Durham, “the place where the magic happened,” is home. “I miss the mind-set,” she said. “I miss my tribe.”

Ms. Morton, too, acknowledged that moving to Utah wasn’t a panacea. “You still have to do the same things: build your community, get involved, find the people you like,” she said. And she now is wrestling with “emotional management — meaning, working through the parts of myself that will keep me successful over the long run.”

Still, she has no plans to leave.

“Weight and fitness is definitely on the forefront of my mind, so I think it keeps me accountable because I have to face it every day,” she said. “Also, it helped me realize — we’re all the exact same. We are all dealing with the same set of four or five problems; they just manifest differently in each one of us. It has helped me on my weight management program, and also on my journey to be a good human.”