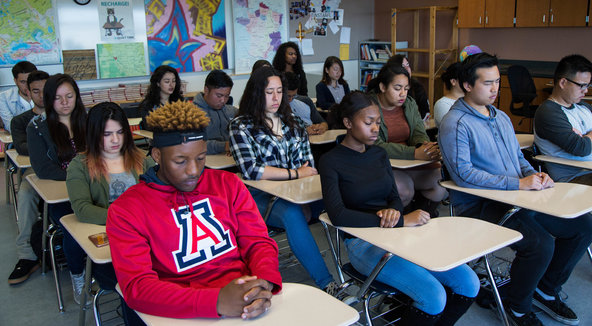 Closing the so-called achievement gap between poor inner-city children and their more affluent suburban counterparts is among the biggest challenges for education reformers. The success of some schools’ efforts suggests that meditation might significantly improve children’s school performance – and help close that gap.

In 2007, James Dierke, then the principal of the Visitacion Valley Middle School in a troubled neighborhood in San Francisco, was determined to improve both the quality of education and student behavior in his school. He adopted a system called the Quiet Time Program, developed by the David Lynch Foundation for Consciousness-Based Education and World Peace. The program, implemented in partnership with the nonprofit Center for Wellness and Achievement in Education, involved introducing two 15-minute periods of quiet into the school day. During those times students could either practice Transcendental Meditation, which is taught as part of the program, or engage in other quiet activities like silent reading.

A major factor preventing underserved children from learning is the stress they encounter on a daily basis – from factors like poverty, deprivation, lack of steady parental input, physical danger and constant fear. Research shows that chronic stress can impair healthy brain development and the ability to learn, and that Transcendental Meditation, a stress-reducing technique that involves thinking of a mantra, can reduce stress and its manifestations – for example, anxiety, high blood pressure and cardiovascular disease. Mr. Dierke wondered whether meditation might reduce students’ stress levels and help them learn.

Over the next three years, Visitacion Valley’s suspensions dropped by 79 percent, attendance rose to 98 percent, and students’ grade point averages rose each year. Of even greater interest, the increase in G.P.A. for the lowest performing demographic was double that for the overall student group.

Anecdotally, favorable feedback poured in from both students and staff members. One seventh grader at Visitacion Valley said, “I used to be really fidgety, couldn’t stay in my seat for very long. Now, after meditating, I can sit down for a whole class without standing up.” Barry O’Driscoll, the school’s director of physical education for the past 14 years, said, “In the first seven years of my tenure, the school was dominated by stress and fighting.” But in the last few years, he said, “we have had very few fights.”

One other middle school and two high schools in the Bay Area adopted the program. And a 2015 review of the program, issued by the Center for Wellness and Achievement in Education in collaboration with the San Francisco Unified School District research department, had more good news.

The results of 17 studies conducted to date in the Bay Area, varying in duration from three months to one year, showed benefits across parameters including reduced stress, increased emotional intelligence, reduced suspensions, increased attendance and increased academic performance.

Although controlled studies are difficult to perform in an academic setting, collectively the results of the Bay Area studies are encouraging. Two controlled studies have been published so far; others are in submission for publication. In one, the effects of the Quiet Time Program, conducted over half the academic year, were evaluated in public middle school students performing below proficiency level. Annual math and English scores improved in the students who meditated, while they declined in those who didn’t meditate. Given that the students in the study were performing below par at baseline, these results are promising.

The second controlled study, authored by WestEd, an independent evaluator, found that after seven months of the Quiet Time Program, ninth grade students who meditated showed a significant decrease in anxiety and a significant increase in resilience compared to nonmeditating students. In addition, meditating students reported sleeping better as well as higher levels of self-confidence and happiness.

It would be naïve to think that meditation alone could erase the effects of the many factors, like poverty, that are barriers to educational achievement. But Quiet Time is a relatively inexpensive intervention that teachers and students enjoy and which preliminary data suggest is effective.

And although this program has focused on schools in low-income areas, adolescents from middle-class and affluent families could benefit from stress reduction as well. Why shouldn’t all our students have access to meditation?

Norman E. Rosenthal is a psychiatrist and the author of “Super Mind: How to Boost Performance and Live a Richer and Happier Life Through Transcendental Meditation.”