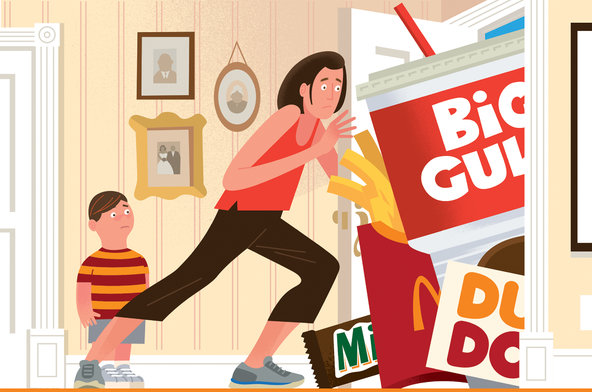 To stem the current epidemic of obesity, there’s no arguing with the adage that an ounce of prevention is worth a pound of cure. As every overweight adult knows too well, shedding excess pounds and keeping them off is far harder than putting them on in the first place.

But assuring a leaner, healthier younger generation may often require starting even before a baby is born.

The overwhelming majority of babies are lean at birth, but by the time they reach kindergarten, many have acquired excess body fat that sets the stage for a lifelong weight problem.

Recent studies indicate that the reason so many American children become overweight is far more complicated than consuming more calories than they burn, although this is certainly an important factor. Rather, preventing children from acquiring excess body fat may have to start even before their mothers become pregnant.

Researchers are tracing the origins of being overweight and obese as far back as the pre-pregnancy weight of a child’s mother and father, and their explanations go beyond simple genetic inheritance. Twenty-three genes are known to increase the risk of becoming obese. These genes can act very early in development to accelerate weight gain in infancy and during middle childhood.

In the usual weight trajectory, children are born lean, get chubby during infancy, then become lean again as toddlers when they grow taller and become more active. Then, at or before age 10 or so, body fat increases in preparation for puberty – a phenomenon called adiposity rebound.

In children with obesity genes, “adiposity rebound occurs earlier and higher,” said Dr. Daniel W. Belsky, an epidemiologist at Duke University School of Medicine. “They stop getting leaner sooner and start putting on fat earlier and put on more of it.”

Still, twin and family studies have shown that many children with these genes remain lean. Furthermore, these same genes were undoubtedly around in the 1960s and 1970s when the obesity rate in children was a fraction of what it is today.

So what is different about the 2000s? Children today are surrounded by a surfeit of unwholesome, easy-to-consume calorie-dense foods and snacks accompanied by a deficit of opportunities to expend those extra calories through regular physical activity. And countering a calorie-rich, sedentary environment is now harder than it should be, with the current heavy emphasis on academics, parental reluctance to let children play outside unattended, and intense competition from electronics. All these circumstances may give obesity genes a greater chance to express themselves.

“There is no going back to a world in which calories are scarce and obtaining them is physically demanding,” Dr. Belsky wrote in an editorial in JAMA Pediatrics. “And governments and their publics have shown little enthusiasm for regulations restricting access to palatable, calorie-dense foods.”

Curbing consumption of sugar-sweetened beverages and keeping calorie-dense junk food out of the house and other settings where young children spend time is crucial. This is especially important for infants and children with large appetites that are not easily satisfied.

It’s also essential that parents model good eating habits, experts agree. “If you do it, they’ll do it,” David S. Ludwig, an obesity specialist at Children’s Hospital Boston, said. “Young children are like ducklings, they want to do what their mothers do.”

Equally important, Dr. Belsky said, is “allowing children in institutional settings – in day care, preschool and elementary school – to be as active as they choose to be rather than forcing them to sit quietly in chairs most of the day. Being physically active encourages a healthy metabolism. Active children are not constantly hungry.”

He added, “In the face of the obesity epidemic, eliminating the handful of opportunities for kids to be active during the day is a shame. Sedentary behavior becomes a life pattern.”

Another critical issue is the vicious cycle of overweight that starts with future mothers and fathers who are overweight or obese. “If we want healthy kids, we need healthy moms before pregnancy and during pregnancy,” Dr. Belsky said. “There are multiple pathways by which unhealthy levels of weight before and during pregnancy can influence a child’s weight going forward.”

As Dr. Ludwig explained, “Although genes are not modifiable, the weight of the mother before and during pregnancy is. Excessive weight gain during pregnancy predicts not just the baby’s birth weight but also the likelihood of obesity in middle childhood.”

The father’s weight is also turning out to be important, Dr. Ludwig said. “Acquired factors influence gene expression,” he said. “Being heavy alters DNA in the father’s sperm that changes gene expression and can be passed down to the next generation.”

Most, though not all, studies have linked a longer duration of breast-feeding to a reduced risk of overweight in children. Although Dr. Ludwig said that the effect “is not dramatic,” a more important benefit of breast-feeding may be “exposing the baby to a wider range of tastes based on what a mother is eating. If a breast-feeding mom eats a large variety of nutritious foods, the child is more likely to like them.”

Antibiotics given early in life, however, may counter any potential benefits of breast-feeding for weight gain, a new study found. Researchers at the University of Helsinki in Finland reported that when breast-fed infants are treated with antibiotics, the antibiotics kill off health-promoting bacteria that live in the gut. “The protective effects of breast-feeding against infections and overweight were weakened or completely eliminated by early-life antibiotic use,” the team wrote in JAMA Pediatrics last month.

Even if children have already started on a path of poor eating habits and excess weight gain, Dr. Ludwig said it is not too late to make healthful changes. As founder of the Optimal Weight for Life program and author of “Ending the Food Fight: Guide Your Child to a Healthy Weight in a Fast Food/Fake Food World,” he advocates an authoritative, but not an authoritarian, parenting style that eliminates stress and conflict over what and when a child eats.

“Never force food on a child,” he insists. “Stand your ground in a gentle but firm way and be prepared to do a little negotiating. When a child refuses to eat the dinner that’s served, put it away in the fridge to be eaten later. If the child says ‘I’m not going to eat it,’ the response should be, ‘Fine, just go to bed,’ not ‘O.K., I’ll make you mac and cheese.’

“Children should be allowed to control their bodies, but parents have to provide the guidance and control the environment,” Dr. Ludwig said.

This is the second of two columns on childhood obesity. Read the first: “The Urgency in Fighting Childhood Obesity.”