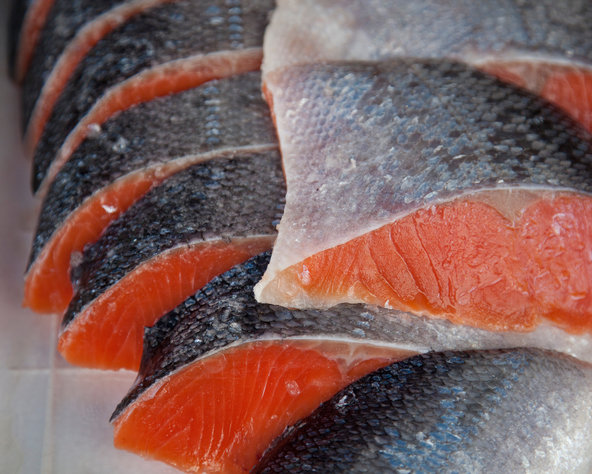 Salmon for sale at the Tsukiji fish market in Tokyo, Japan.Credit Kevin Miyazaki for The New York Times

Eating seafood is linked to a reduced risk of dementia-associated brain changes in people who carry the ApoE4 gene variation, which increases the risk for Alzheimer’s disease. Eating seafood was not linked to similar changes in those who carried other forms of the ApoE gene.

The study, published in JAMA, looked at 286 autopsied brains and also found that eating seafood was linked to increased mercury in the brain, but that mercury levels were not linked to brain abnormalities.

After controlling for age, sex, education and other factors, the researchers found that compared with those who ate less seafood, ApoE4 carriers who had one seafood meal or more a week had lower densities of the amyloid plaques and neurofibrillary tangles typical of Alzheimer’s disease. Over all, they had a 47 percent lower likelihood of having a post-mortem diagnosis of Alzheimer’s.

Consumption of fish oil supplements was not correlated with pathological brain changes.

The lead author, Martha Clare Morris, a professor of epidemiology at Rush University, said that mercury from fish appears to pose little risk for aging people. But, she said, there are studies that show that mercury consumption in pregnancy can cause cognitive problems in babies.

“Most studies in dementia have found that one seafood meal a week is beneficial,” she said, though “they haven’t found that the more you eat, the lower the risk.”