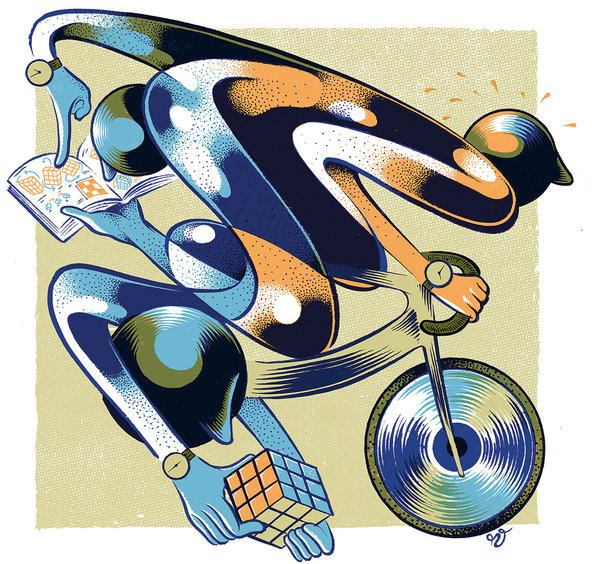 Learning requires more than the acquisition of unfamiliar knowledge; that new information or know-how, if it’s to be more than ephemeral, must be consolidated and securely stored in long-term memory.

Mental repetition is one way to do that, of course. But mounting scientific evidence suggests that what we do physically also plays an important role in this process. Sleep, for instance, reinforces memory. And recent experiments show that when mice and rats jog on running wheels after acquiring a new skill, they learn much better than sedentary rodents do. Exercise seems to increase the production of biochemicals in the body and brain related to mental function.

Researchers at the Donders Institute for Brain, Cognition and Behavior at Radboud University in the Netherlands and the University of Edinburgh have begun to explore this connection. For a study published this month in Current Biology, 72 healthy adult men and women spent about 40 minutes undergoing a standard test of visual and spatial learning. They observed pictures on a computer screen and then were asked to remember their locations.

Afterward, the subjects all watched nature documentaries. Two-thirds of them also exercised: Half were first put through interval training on exercise bicycles for 35 minutes immediately after completing the test; the others did the same workout four hours after the test.

Two days later, everyone returned to the lab and repeated the original computerized test while an M.R.I. machine scanned their brain activity.

Those who exercised four hours after the test recognized and recreated the picture locations most accurately. Their brain activity was subtly different, too, showing a more consistent pattern of neural activity. The study’s authors suggest that their brains might have been functioning more efficiently because they had learned the patterns so fully. But why delaying exercise for four hours was more effective than an immediate workout remains mysterious. By contrast, rodents do better in many experiments if they work out right after learning.

Eelco van Dongen, the study’s lead author and a former researcher at Radboud University (he is now a policy officer at the Netherlands Organization for Scientific Research), hopes that future studies will help determine both the optimal time to exercise and the ideal activity to reinforce learning. Workouts that are too strenuous “could be less positive or even detrimental” to acquiring knowledge, Dr. van Dongen says, while gentle exertions — “a short, slow walk,” he adds — might not prompt enough of an increase in the biochemicals needed to influence how the brain learns.

For now, he says, if you are trying to memorize a PowerPoint narrative or teach yourself macroeconomics, it could be beneficial to exercise a few hours after a study session. “Long-term memory is not only influenced by what happens when you learn new things,” he says, “but also by the processes that take place in the hours and days afterward, when new information is stabilized and integrated in your brain.”