When Henry Heimlich, the doctor credited with championing a method for saving choking victims from asphyxiation, died this month, I recalled all the Choking First Aid posters I had seen in restaurants across New York City. They are mandatory by law — as are warnings against alcohol consumption during pregnancy, food allergy signs and letter-grade postings — but for many years they were ineffective and garish.

The choking first aid posters of yore were a messy confluence of primary colors and a stylized fish skeleton. The design, in yellow, blue and red, did not so much scream “look here to perform a safety maneuver” as it did “look away or be blinded.” And we haven’t even gotten to the instructions yet: They were both difficult to read and hard to follow. Counterintuitively, the “What to Look For” in a victim guidelines came after “When the Victim Has Collapsed,” and there was a separate section for when the victim was seated. The victim and good Samaritan were simple, expressionless silhouettes.

But in 2010 the poster was redesigned. The streamlined version was much easier to read, the directions less cumbersome and more direct. When the posters changed around the city, I hadn’t started working for The Times and had no idea that the change had been initiated and shepherded by a Timesman.

I only learned this on Dec. 17, when Mr. Heimlich died, after I was asked a pithy question married to a seemingly random emoji.

When Mr. Heimlich died, we had an advance obituary prepared and published it shortly after the news broke. In Slack, our internal team communications platform, we discussed language for a news alert, then someone posted an emoji. The emoji was simply entitled “choker.”

“Five dollars to anyone who can tell me who that is,” wrote Eric Bishop, an assistant editor on the news desk. 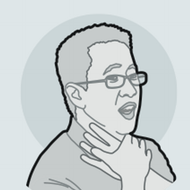 The emoji depicted a man grabbing his throat. He was the choking “dummy” from the updated poster. And those who looked closely knew the man well. It was Archie Tse, The Times’s deputy graphics editor. The redesign itself was led by an assistant masthead editor, Steve Duenes, who at the time was a graphics editor.

Mr. Duenes had called the New York City Department of Health and had volunteered to reimagine the poster.

“They were game,” he says. “I wasn’t overly frustrated with the old design, but it needed some improvement.”

Mr. Duenes enlisted the help of Mr. Tse, who modeled for a photo shoot that would eventually become the illustrated version seen across the city today. “I think they also figured it would be kind of amusing, and for a few insiders it still brings a grin,” Mr. Duenes adds about his colleague’s participation.

Though Mr. Tse insists he isn’t photogenic, he jumped at the opportunity.

“What Steve was doing was a good cause so I wanted to help any way I could,” he says.

“I think my wife was really glad to participate,” Mr. Tse jokes. “She likes to torture me. It was fun for her trying to compress the air out of my lungs.”

The newer poster has just six steps and is sharply written. Red text on a gray background. Understated models (Mr. and Mrs. Tse) in translucent greys and beige.

“The illustration style is pretty standard for information graphics,” Mr. Duenes says, “although the figures in these drawings may exhibit a few more recognizable features.”

Thankfully, I’ve never needed to use the poster. Nor have the Tses or Mr. Duenes.