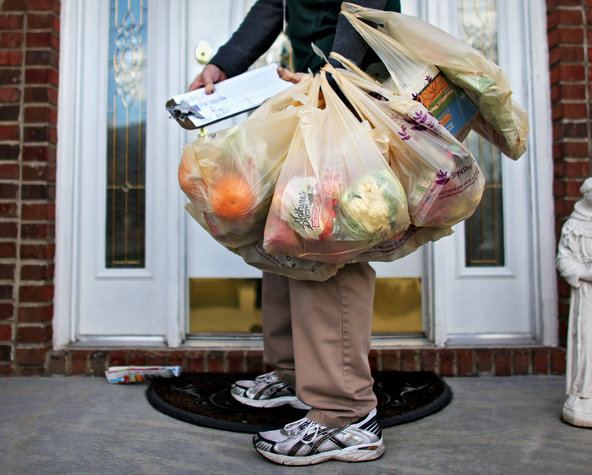 A study of online grocery orders found that people who order several days before delivery make better food choices than those who seek last-minute deliveries.Credit Yana Paskova for The New York Times

Want to improve your diet? Try time-delayed eating — ordering (or at least choosing) your food long before you plan to eat it.

A series of experiments at Carnegie Mellon University found that when there was a significant delay between the time a person ordered their food and the time they planned on eating it, they chose lower-calorie meals.

What was interesting, researchers said, was that the participants were not making a conscious choice to order less. Most didn’t even realize they were choosing lower-calorie options.

Being less hungry when they ordered the meal accounted for only a small part of the difference, said Eric M. VanEpps, a post-doctoral student at the University of Pennsylvania Center for Health Incentives and Behavioral Economics who led the research while at Carnegie Mellon. The research was published this summer in the journal American Marketing Association.

Dr. VanEpps believes people have what he calls a “bias toward the present,” that alters the calculations they make about something that is occurring momentarily.

On the other hand, when you order a meal in advance, “you’re more evenly weighing the short-term and the long-term costs and benefits,” he said. “You still care about the taste but you’re more able to exert self control.”

The finding is the latest to suggest that timing matters when it comes to healthful eating. When people order groceries online, they are more likely to choose healthier foods when they schedule a delivery date several days away, one study found..

One study showed that people choosing a snack in advance were more likely to pick an apple or banana over a candy bar.Credit Tony Cenicola/The New York Times

The latest research, which focuses on three eating-delay experiments, offers a number of insights that can help us make better choices for eating out.

In the first experiment, 394 employees of a large health care company were asked to place their lunch orders at least 30 minutes before they wanted to pick up their meal. They had the option to place an order as early as 7 a.m. for lunches that were to be picked up between 11 a.m. and 2 p.m. Some people placed their order five hours in advance while others barely made the deadline, placing an order 31 minutes ahead of pickup.

The more hours people planned ahead, the fewer calories they ordered and ultimately consumed. For every hour in advance the participants ordered their meal, they ordered 38 fewer calories. The biggest effect of the time-delay was seen in women.

In another experiment, the Carnegie Mellon researchers recruited more than 1,100 workers and controlled the time delay between ordering and eating. One group of workers at the same company placed their food order before 10 a.m. and had to wait at least an hour before eating. Another group placed its lunch order after 11 a.m., and waited just 30 minutes before eating it. In one arm of the experiment, calorie labels were put on meals containing fewer than 500 calories.

The same pattern ensued: When people ordered lunch longer in advance, they were more likely to choose the meal with less than 500 calories. What was interesting was that they didn’t seem to think they were doing anything unusual and said they would have chosen the same option, regardless.

Did people order more calories later in the morning because they were hungrier? A third experiment attempted to answer this question. The researchers recruited about 200 university students who took classes that ended around lunchtime, and asked them to answer surveys in exchange for a free lunch.

Some students took the survey before their class, while others took it right before receiving their meal. The surveys asked about unrelated issues in order to mask the true purpose of the trial, and gave the students the opportunity to order their meal and also indicate how hungry they were.

Once again, the pattern held: Students who took the survey before their class (and thus placed their food order earlier) ordered lunches containing about 100 fewer calories. The sandwiches they chose were similar in type to those of the students who ordered later, but they were more likely to order bottled water instead of a soda and chose less caloric combinations of fruit and cookies.

Dr. VanEpps isn’t sure advance ordering will work the same way if you are going out for dinner or a celebratory meal. But if businesses or schools want to encourage employees and students to eat healthfully, he said “let them make decisions further in advance.”

But some researchers were skeptical about people’s ability to plan ahead like this on a regular basis.

“This requires a level of organization and forward planning that would be impossible for someone like me,” said Marion Nestle, a professor of nutrition, food studies and public health at New York University. But, she said, “More power to those who can do this!”