The challenge: A healthy 7-year-old boy suddenly starts having fevers and night sweats. Can you figure out why?

Every month, the Diagnosis column of The New York Times Magazine asks Well readers to sift through a difficult medical case and solve a diagnostic riddle. This month we present the case of a boy who has fevers topping 102 degrees every night for over a month. His parents sought help from nearly a dozen doctors in two states before a diagnosis was made.

Below I’ve given you the information that was available to the doctors who figured out the cause of the boy’s fevers. It’s up to you to use this information to put his story together for yourself.

As usual, the first person to crack the case gets a copy of my book, “Every Patient Tells a Story,” and, of course, that fabulous feeling you get when you solve a really tough puzzle.

“I think you need to take him back home.” Her brother’s voice was calm, but she could hear an undertone of anxiety even over the poor cellphone reception that was all she could get from rural Colorado. “He needs to see a hematologist. It could be a virus, but it could also be something else.” He didn’t say it, but she knew what he was thinking: cancer.

Her son, just 7 years old and always a little delicate, had been sick for nearly a month. He was fine during the day, but every night he’d spike a fever of 102 or 103.

Even before they’d come to the mountains for a much needed vacation, she’d taken him to see his pediatrician at home in Minneapolis several times. At each visit, the doctor or one of his partners had looked the boy over closely, and each time he’d seemed fine.

It was probably viral, she was told, time after time. But he seemed to be having one viral infection after another.

The day before they left for Colorado, the boy’s father took him to the doctor’s office one more time.

Maybe it wasn’t viral, the pediatrician acknowledged, and prescribed a “Z-pak” — a five-day course of azithromycin. Don’t cancel the trip, the doctor reassured him. He’ll get better.

But he hadn’t. While on vacation, his mother took him to a walk-in clinic, where they’d checked his blood. A worried looking doctor told her that he didn’t know what was wrong with her boy. He should probably see a cancer specialist.

Now she was really worried. There weren’t any specialists anywhere near the bucolic town where they were staying. That’s when she’d sent the test results to her brother, a researcher in immunology. He wasn’t a doctor, but he passed the results to friends who were, and they were worried, too.

The family headed home right away, but the 4th of July was coming. They couldn’t get in to see a hematologist until Tuesday.

By now the boy was starting to look sick. He was pale and had dark circles under his eyes. Small for his age — consistently in the fifth percentile for height and weight — he now looked even smaller, thinner. He was a quiet child, always had been. Thoughtful and comfortable in the company of adults, as so many only children are. Even now he never complained.

Nothing hurt. He was simply tired. His fevers started coming a little earlier, peaking a little higher. His mother noticed a cough and wheezing sometimes. Always a picky eater, with these intermittent fevers, very few foods seemed appealing. She tried to hide the terror she felt when he seemed to be fading as she watched.

A Long Line of Specialists

The hematologist examined the boy and sent off more blood. Definitely not cancer, he said. He suggested seeing a gastroenterologist.

The gastroenterologist got an M.R.I. of the child’s digestive system. Nothing there. He noticed the boy’s wheezing and gave him an inhaler, then referred mother and child to a rheumatologist and an infectious disease specialist.

It seemed to the parents that this had to be an infection, but the earliest they could get in to see the infectious disease doctor was the following week. For the boy’s mother, the delay now seemed intolerable.

It had been five weeks since the fevers first started. In that time, the boy had lost nearly 10 pounds. They’d seen eight doctors in two states. They’d all been very nice, thorough, thoughtful, but had no answers.

By the weekend she was desperate. The boy needed to be in the hospital. Couldn’t they see how sick he was? She couldn’t wait for the specialist. She took him to the emergency room of the big university hospital.

The E.R. doctors, like all the doctors they’d seen so far, were kind and thoughtful, and so gentle with her delicate son. But like all the other doctors, they had no answers. They prescribed another inhaler for the boy’s wheezing, since the first hadn’t helped. They also urged her to see the infectious disease specialist. His appointment was just a couple of days away.

The boy was sitting quietly between his parents watching a video on his tablet when Dr. Bazak Sharon and the infectious disease fellow he was training entered the exam room. Dr. Sharon’s first thought was that the child looked as if he had tuberculosis.

He’d seen a lot of TB in this clinic, but it was usually among immigrant families who had traveled to Minneapolis from countries where the disease was common. Like this boy, kids with TB were usually thin, sickly looking, pale and quiet. But based on what his fellow told him, the child had no exposures that would put him at risk for this disease. He’d only been out of the country once – to Canada. He’d visited the beaches of South Carolina and the deserts of Arizona, and most recently the mountains of Colorado. But TB was rare in all these locales.

Dr. Sharon introduced himself to the child, who looked up immediately and smiled. How do you feel, he asked the boy? His temperature had been recorded at 103 degrees. I feel good, he’d answered pleasantly. Does anything hurt? No.

His heart was beating rapidly – nearly 140 beats per minute, but that was probably due to the fever. There were several enlarged lymph nodes in the child’s neck and his groin, though none under his arms. Otherwise his exam was unremarkable.

Dr. Sharon had reviewed the blood tests that had already been done but wanted to see if anything had changed. And given that the only localized complaint was cough and wheezing, he wanted to get another chest X-ray.

Reviewing those studies that night, Dr. Sharon saw that the boy was slowly getting worse. He saw patients at that clinic only once a week and was reluctant to wait that long before having him seen again. He thought they needed an answer much sooner than that.

You can see the note from Dr. Sharon and his fellow here.

The note from the patient’s visit to the hospital.

Dr. Sharon called the family the next morning. He’d reached out to one of his friends and colleagues, Dr. Abraham Jacob, who could see them. They should go to the University of Minnesota Medical Center Fairview, where Dr. Jacob would orchestrate a thorough workup. That would be the fastest way to get an answer.

Based on the assessment by Dr. Jacob and his resident and the recommendations from Dr. Sharon, the team reached out to specialists in hematology-oncology and in rheumatology. And since his chest X-ray was abnormal and he had enlarged lymph nodes, they wanted to get a CT scan as well.

You can see the note from Dr. Jacob and his resident here.

Here are the notes from the pediatrics department.

Breathing Through a Straw

It was the results of the CT scan that really got things moving. It was the middle of the day when the resident was paged by the radiologist. The pictures showed that the lymph nodes in the boy’s chest were so swollen that they were pressing on the trachea – the breathing tube – so that it was almost completely cut off. Essentially he was breathing through the equivalent of a cocktail straw.

Any additional swelling could cut off the boy’s breath completely. You can see an image from the CT scan here. 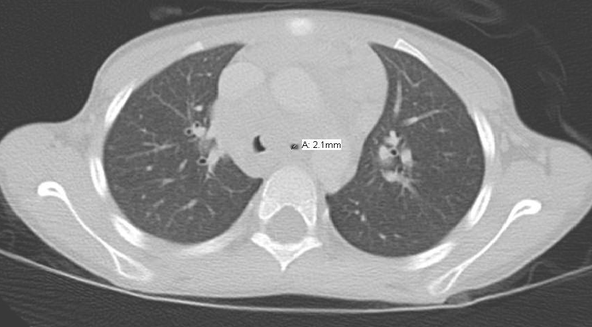 This CT scan shows the patient’s chest. In a child of this age, the trachea is normally eight to 12 millimeters wide. Much of the gray tissue surrounding the trachea and esophagus is swollen lymph nodes.Credit

A normal trachea in a child this age is four to six times the size seen in the scan. The image added even more pressure to make a diagnosis and treat the child before he got sicker.

The first person to offer the correct answers to these two questions will get a copy of my book and that sense of triumph that comes from nailing the right diagnosis when it really matters.

Rules and Regulations: Post your questions and diagnosis in the comments section below. The winner will be contacted. Reader comments may also appear in a coming issue of The New York Times Magazine.