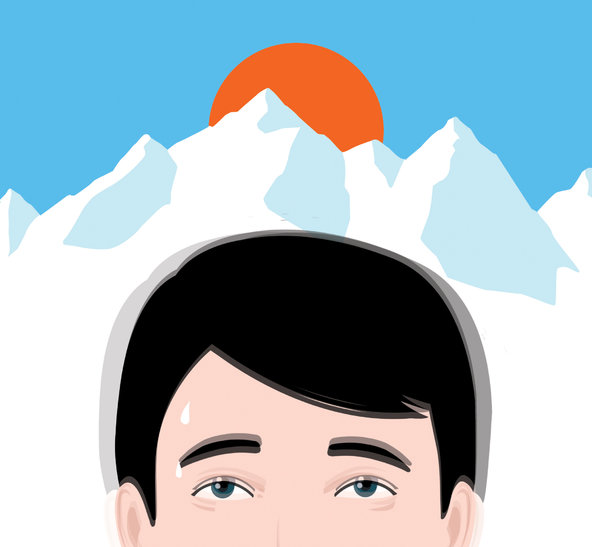 The Challenge: Can you figure out what is wrong with a 38-year-old man who suffers from fevers, insomnia and night sweats after traveling to the mountains of Colorado to be his brother’s best man?

Every month, the Diagnosis column of The New York Times Magazine asks Well readers to try their hand at solving a real-life medical mystery. Below you will find the story of a 38-year-old marketing executive from the Boston area who suddenly becomes sick when he takes his family to his brother’s destination wedding in the Rockies. Within a day of their arrival, the man begins to feel sick, though the rest of his family feels fine.

As usual, the first reader to offer the correct diagnosis gets a signed copy of my book, “Every Patient Tells a Story,” along with that feeling of satisfaction that comes from solving a difficult but really cool case.

“Either you are getting in the car with me to go back to the hospital, or I’m calling an ambulance,” the woman announced. “It’s totally up to you.”

Her husband, 38 and never sick a day in his life, had been desperately ill for more than a week. He’d just gotten out of the hospital that morning, and after being home for less than 12 hours he was worse than ever. Though she couldn’t bring herself to say it out loud, she was worried he might be dying. And though he didn’t say anything, so was he.

It had started at his brother’s wedding, one of those destination events in the mountains of Colorado. And almost from the moment he stepped off the plane, he’d started to feel awful. His head ached. So did his body. His eyes were puffy, and his whole face looked swollen. He couldn’t eat, and he couldn’t sleep. When he went to bed that first night, he tossed and turned, though he felt exhausted. In the morning, when he dragged himself out of bed, the sheets were soaked with sweat.

At first he wrote it off as altitude sickness. The resort was 11,000 feet above sea level, and he’d never been this high up. Though his wife and the kids felt fine, there were others in the wedding party who were feeling the effects of the altitude as badly as he did. One of the bridesmaids fainted at the rehearsal dinner. And an elderly aunt had to leave before the wedding.

The day of the wedding it snowed – in May. The kids were thrilled. His wife took them sledding. He’d spent the day in bed, trying – mostly unsuccessfully — to get some sleep. That afternoon the wedding service seemed to last forever. The tuxedo felt like a straitjacket. There was a pressure in his chest that made it hard to breathe. But he’d stood at the front of the church, proud to be best man to his younger brother.

After the service, the photographer led them outside, trying to capture the spring blossoms covered with snow that made the setting so extraordinary, and he worked hard to exhibit an enthusiasm he was too sick to feel.

By the time he made it to the dinner reception, his whole body shook with violent chills, and his head was pounding. His collar felt so tight he could hardly swallow. He’d been working on his toast for days, so his wife talked to the D.J. and changed the order of the toasts so that he could give his toast early. After completing it, he made his apologies, went back to the hotel and climbed into bed.

He figured he’d feel better when they got to the lower altitudes of Denver, where they’d arranged to spend their last night. But he didn’t. Even when he traveled back to Boston, down at sea level, he didn’t feel any better. He had some business in the city so was staying at a hotel while his wife took the two kids back to their home, an hour away. She was worried but he reassured her he’d be O.K.

But that night, alone in his hotel room, he felt so bad he began to get scared. If this was altitude sickness, he should be better by now. Everything he read on the Internet said so.

Finally he could take it no more. He went to the front desk and asked for a taxi and went to the closest emergency room, at Massachusetts General Hospital.

Because of his chest tightness, the doctors at Mass General ordered an EKG. To his surprise, it was abnormal, and he was rushed to the cardiac care unit. He hadn’t had a heart attack; they were sure of that. But something had damaged his heart.

After dozens of tests, the doctors told him he had something called myocarditis, an inflamed heart muscle, though they couldn’t tell him why. For three days they searched for the cause of injured muscle. Myocarditis is often due to a viral infection, but the doctors wanted to make sure they didn’t miss anything treatable.

At the top of their list, they worried that he had picked up some kind of tick-borne infection while in rural Colorado. None of the tests came back positive, but they sent him home to finish up a week of the antibiotic doxycycline, just in case.

You can read the notes from Mass General and the infectious disease specialist here.

In the hospital he felt a little better. His chest didn’t hurt, and his heart wasn’t racing. His fever went down. On his way home he felt like he was on the mend. His wife wasn’t so sure. And a couple of hours later, when she looked in on him again, she was frightened by how sick he looked.

He was pale and sweaty – the way he’d been in the mountains. And the shaking and fevers were back. His headache was so bad that he was crying with pain, something she’d never seen before. She called Mass General. The doctor there said that if she was worried she should bring him right back. But the prospect of an hour-long drive seemed daunting. She decided to take him to the local hospital one town over.

So, did he want her to call an ambulance, or should they go by car?

Back to the Hospital

The patient’s wife dropped off the kids at a friend’s house, then drove him to Anna Jaques Hospital in Newburyport, Mass. It was late by the time they arrived and the emergency room was quiet.

Dr. Domenic Martinello knocked at the entrance to their hospital cubicle. The patient’s wife looked up expectantly, her face tight with exhaustion. The patient lay motionless on the stretcher; his eyes were sunken, and his skin hung off his face as if he hadn’t eaten much recently. His voice was soft but raspy, and every time he swallowed, his lips tightened in a grimace of pain.

Together, husband and wife recounted the events of the past few days: the wedding, the fevers, headaches, pain in his chest, in his neck and in his throat, the four days in the hospital in Boston.

It was certainly a confusing picture, and Dr. Martinello wasn’t sure what to make of the diagnosis of myocarditis. But the patient had no chest pain now, only the headache, sore neck and painful throat.

He quickly examined him. The patient’s skin was warm and sweaty, and his neck was stiff and tender, especially on the right. He was going to approach this systematically, he told the couple. First he would get a head CT, then a scan of the neck, and then he would do a lumbar puncture – a spinal tap. He felt optimistic that one of those tests would give him an answer.

Dr. Martinello did get an answer. But it wasn’t the one he was expecting.

The first reader to identify the cause of this man’s illness gets a copy of my book and the pleasure of making a difficult diagnosis. The answer will be posted Friday afternoon on Well.

Rules and Regulations: Post your questions and diagnosis in the comments section below. The winner will be contacted. Reader comments may also appear in a coming issue of The New York Times Magazine.