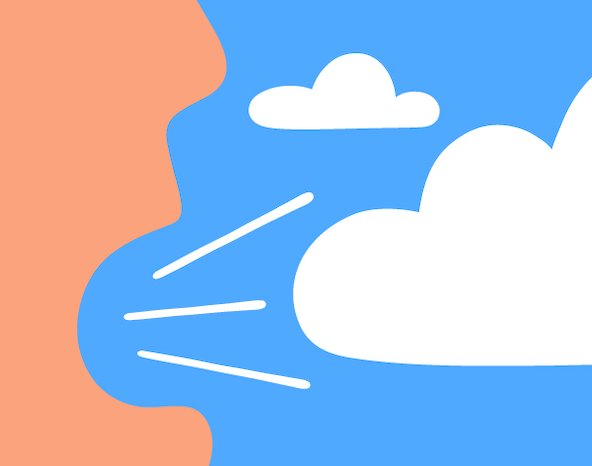 The Challenge: A 43-year-old man starts to cough every time he takes a deep breath. Can you help him figure out why?

Every month, the Diagnosis column of The New York Times Magazine asks Well readers to try their hand at solving a medical mystery. Below you will find the story of a healthy middle-aged man who starts coughing and just can’t stop. He can’t exercise. He can’t laugh. Sometimes he can’t even talk without interrupting himself with deep, awful-sounding hacks.

Below I provide much of the information available to the doctors who examined him. It took 18 months before a doctor figured out what was wrong. Can you do it any faster? The first reader to offer the correct diagnosis will receive a signed copy of my book, “Every Patient Tells a Story,” and the satisfaction of solving a real-life case.

An Emergency 18 Months in the Making

“You should probably have that checked out in the E.R.,” the nurse suggested to the middle-aged man on the other end of the phone. “And sooner rather than later.” In the next few days? he asked. In the next few hours, the nurse replied.

The 43-year-old man hung up the phone more surprised than worried. He had been dealing with an annoying and persistent cough for a year and a half and none of the doctors or nurses he’d seen in that time seemed to think it was a big deal. Until now – since he started coughing up blood.

He called his wife to tell her what the nurse suggested. After work he was going to drive himself to the emergency room at the veterans’ hospital in downtown Denver. He could hear the relief in her voice when she asked if he wanted her to come with him. No, she had enough on her hands looking after their four children. He’d let her know what they said.

In the E.R., the man’s complaint got him seen right away. His chest X-ray was normal, they told him. (The X-ray is shown here) 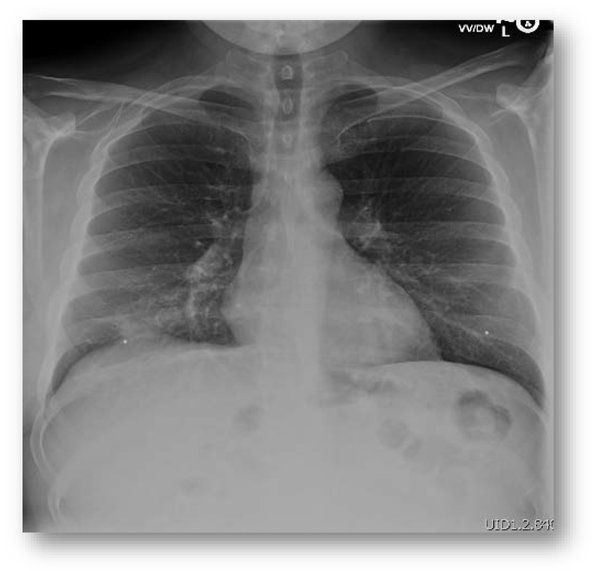 But when they came back into his cubby wearing masks over their noses and mouths he suspected that the CT scan was not. The scan had shown some kind of hole in his lungs, the E.R. doctor told him. That’s why he was coughing up blood. One of the diseases that can cause those kinds of cavities was tuberculosis. Had he ever been exposed to TB? Not that he knew of. (The CT scan images are shown here.) 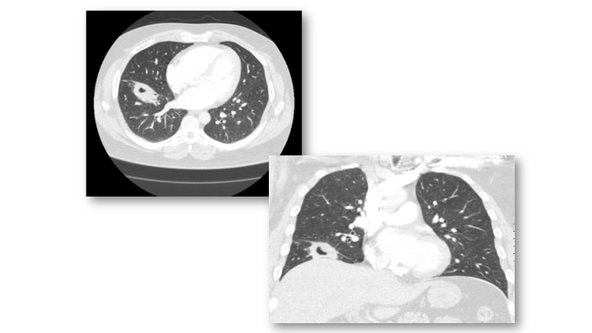 Because TB was such a dangerous disease – and extremely contagious — they would have to find out if he had it. If he did, he would certainly need to be treated. And to make sure he didn’t infect anyone while he was being tested, he needed to be in a specialized room – a room where the air he breathed wouldn’t be breathed by anyone else. None of the hospital’s negative pressure rooms were available so they were going to transfer him to Presbyterian/St. Luke’s Medical Center, the big regional hospital just a couple of miles away. They had an available room and would be able to care for him.

You can read the patient’s history and physical from the E.R. here:

The patient’s notes from the hospital.

Dr. Karen Schmitz was the second-year resident assigned to care for the new guy sent over to be tested for TB. She could see the patient sitting up in bed talking on the phone as she secured the mask over her nose and mouth and entered the double-door room that would prevent any air-borne infectives from spreading. As she entered, the patient looked at her, smiled a warm smile, and held up a finger as if to say, “I’ll be with you in a minute.” As he finished up his phone call, the doctor looked at him carefully. He was a robust guy – youthful and healthy looking. He certainly didn’t look like any of the people she’d cared for with active TB. When he hung up, he apologized and the doctor introduced herself. She pulled up a chair and settled in. She knew from what she’d read in the chart that it was going to be a long story.

The bloody cough was pretty new, he told her. It started two weeks earlier. But the cough itself had been around for 18 months. He’d caught it a couple of summers ago, and it just never went away. At first he thought it was bronchitis – he’d had that a lot when he was a kid — but when it lasted for more than a couple of weeks, he went to see his primary care doctor. He’d never had a fever or any other sign of being sick. He had some runny nose and itchy eye symptoms that started weeks before the cough and so he and his doctors thought it was allergies. Or asthma. His doctor prescribed an antihistamine and later an inhaler. They fixed his runny nose, and eased up the chest tightness, but the hacking never slowed down.

He saw a pulmonologist who, hearing that he had a little heartburn, started him on a powerful antacid medication. That pill completely fixed the heartburn but didn’t touch the cough.

That first year he’d seen three doctors in a half-dozen appointments, and had a scope, a chest X-ray and a slew of blood tests and still no one could tell him why he was coughing or how to make it stop. So he figured he’d just have to learn to live with it.

Not that he wanted that. Every time he took a deep breath he would cough. In the middle of telling a good story he’d have to stop to cough. Whenever he laughed, he coughed. Dozens of times a day, he coughed. He even had to give up exercising. Any time he exerted himself, even just a little, the cough would kick in with a shocking fierceness. Recently he’d tried riding his bike and just 15 minutes in he had to stop. Even though he was taking it easy, as soon as he started to breathe just a little harder than usual, he nearly keeled over. He had to get off his bike. He was doubled over with the ferocious hacking. Sweat and tears poured down his cheeks. He could hear the rasping sound of his breath between the deep jagged coughs. He wondered if he could even make it home. That was the last time he tried to exert himself. And that had been weeks earlier.

You can see the pulmonologist’s notes here:

The notes from the lung specialist.

But eventually, he started to cough up blood. That happened the morning after he’d had another terrible blast of coughing. He’d gone with his wife and four children to Vail for Thanksgiving. As he was packing the car to come home he started coughing and felt as if it would never stop, as if he’d never be able to breathe again. But he recovered, until the next morning when he started to cough up blood. It scared him. And terrified his wife. When it didn’t get better after a couple of weeks, he’d decided to call the hospital, and the nurse on the phone sent him to the E.R.

Now, talking to Dr. Schmitz, he told her he never smoked and rarely drank. And even though it was legal, he never smoked pot either. He had been an officer in the Air Force and now was a real estate agent. He had spent a few months in Kuwait and another few in Saudi Arabia, but that was in the 1990s. He’d traveled a bit – mostly out west, but nothing recent. He took medicine for high cholesterol, the antihistamine and the antacid medicine, but that was it. His exam was unremarkable. Dr. Schmitz listened hard through her stethoscope as she placed it on his chest where she knew the hole in his lung was, but heard nothing abnormal.

She didn’t start him on antibiotics, because she didn’t yet know what she was treating, she told him. Tuberculosis seemed unlikely so she was going to test him for other infections as well. To make sure the team didn’t miss anything, they consulted an infectious diseases specialist and a pulmonologist.

You can see their notes here.

Notes from the infectious disease specialist.

Dr. Schmitz checked on her patient throughout the day. He was always on the phone, his computer open, hard at work. So far they were doing nothing for the guy – just watching and waiting for answers. When the TB test came back negative, Dr. Schmitz thought he might very well be the healthiest patient in the entire hospital. Was she right? The patient got his diagnosis the very next day.

What do you think is making this patient cough?