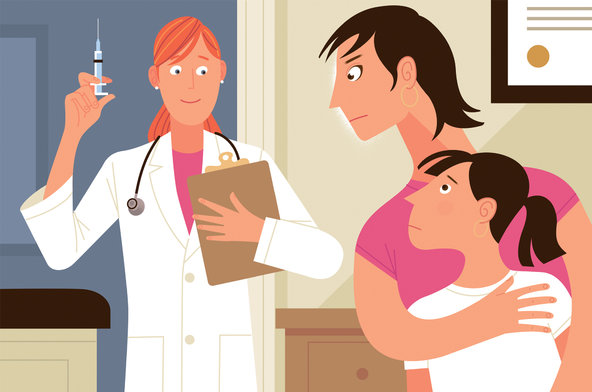 You’d think that when parents are told of a vaccine that could prevent future cancers in their children, they’d leap at the chance to protect them. Alas, that is hardly the case for a vaccine that prevents infections with cancer-causing human papillomavirus, or HPV. The vaccine, best given at age 11 to 12, is currently the most underutilized immunization available for children.

HPV is by far the most common sexually transmitted infection in the United States, and nearly every sexually active person becomes infected at some time in life. The virus in one or another of its variants causes more than 90 percent of cervical cancers, as well as most cancers of the vulva, vagina, anus, penis and oropharynx, which includes the back of the throat, base of the tongue and tonsils. It also causes genital warts.

Every year, the Centers for Disease Control and Prevention reports, about 14 million Americans become infected with HPV, most of them teenagers or young adults, and a cancer caused by HPV is diagnosed in an estimated 17,600 women and 9,300 men.

Yet, when one of my sons was urged to get the HPV vaccine for his boys, ages 11 and 14, he replied, “Why? They’re not yet sexually active.” I reminded him that not all sex is consensual, and exposure to the virus does not require sexual penetration. However, his response reflects a common misunderstanding among millions of parents, and often their children’s doctors, of the value of the vaccine and the fact that it is most effective if given to preteenagers when the immune response is strongest and before they are exposed to an offending form of the virus.

But as of 2014, only 40 percent of girls and 21 percent of boys ages 13 to 17 had received all three doses of the HPV vaccine, whereas 88 percent of boys and girls had been vaccinated against tetanus-diphtheria-pertussis and 79 percent had gotten the meningococcal vaccine.

There are several explanations for the low rate of HPV immunization among young teens. One is that the vaccine is relatively new — it was first approved in 2006 — and expensive. At about $300 a dose, the three-dose series can approach $1,000 a child, although now, as with other government-recommended vaccines, it is covered by insurance with no co-pay, and the federal Vaccines for Children program provides free vaccination for children who are uninsured or underinsured, according to the American Cancer Society.

The society last month updated its immunization guideline for the HPV vaccine, bringing it in line with the advice issued two years ago by the federal Advisory Committee on Immunization Practices. While the committee considered evidence primarily from company-sponsored studies, the cancer society looked at additional studies conducted by independent researchers.

The society also more carefully defined the effect of age at the time of immunization, finding decreased effectiveness with age that underscores the importance of early vaccination.

“If the vaccine is to be given to people 22 to 26, doctors should inform patients that it is less effective,” said Debbie Saslow, the director of cancer control intervention for the cancer society. Still, it is not too late to immunize college students who did not get the vaccine when they were younger, she said.

A second obstacle to wider HPV immunization is the erroneous belief that it would promote teenage promiscuity, an argument more commonly used to counter birth control advice for teenagers. There is no direct connection between the vaccine and sexual activity and no reason to suggest one, said Dr. Saslow, the lead author of the cancer society’s updated guidelines. If asked, a parent or doctor could simply say the vaccine prevents infection by a very common virus that can cause cancer.

Although some early publicity for the vaccine focused on preventing sexually transmitted disease, Dr. Saslow said, “first and foremost, this is a cancer-prevention vaccine. Multiple studies have shown no negative impact on any measure of sexual activity among girls given the HPV vaccine. You don’t tell teenagers learning to drive not to wear a seatbelt because it may encourage them to run red lights.”

Parental support for having 11 and 12 year old children vaccinated against HPV has been very weak, with only one in five thinking it should be required for school entry. Several states have proposed mandatory vaccination for school entry, and a national sampling of 1,501 parents of children ages 11 to 17 showed that including an “opt out” provision would almost triple parental support for such a requirement, according to researchers at the University of North Carolina Gillings School of Global Public Health.

The most pernicious argument against HPV immunization involves postings on the web of undocumented horror stories that some parents attribute to the vaccine, not unlike the misattribution of autism to the vaccine for measles-mumps-rubella. None of the accounts of severe adverse effects parents have linked to the HPV vaccine have been borne out by sound research.

Three HPV vaccines have been developed, although only one, which protects against nine variants of the virus, now remains on the market. The C.D.C. has stated unequivocally that clinical trials have shown them all to be “very safe.”

“Each HPV vaccine was found to be safe and effective,” the agency has declared.

The most common side effects are local pain, redness or swelling at the site of the intramuscular injection. As with other vaccines given to teenagers, fainting sometimes occurs, and patients should be advised to sit or lie down for 15 minutes after getting the vaccine.

The three-dose vaccines should be given to boys and girls as follows: The first dose should ideally be given at age 11 or 12, but can be given to children as young as 9 or to young adults through age 26. The second dose is administered one or two months after the first. And the third dose is given six months after the first. Protection is not complete until all three doses are received. However, there is no maximum interval; if any dose is delayed, it should be given at the next opportunity. There is no need to restart the series.

The vaccine can be safely administered at the same time as other vaccines are given, like the Tdap, meningococcal or influenza vaccine. Although HPV vaccine should not be given during pregnancy, no fetal harm has yet been shown when pregnancy was discovered after one or more doses of the vaccine were administered.

Thus far, there is also no indication that vaccine protection diminishes with time. Individuals followed for up to 10 years post-immunization have shown no sign of decreased protection, and booster doses are not required.