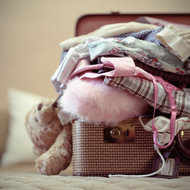 High school graduation can give way to an uneasy season in the raising of a teenager. In place of a summer of family togetherness, parents often feel out of step with adolescents who are preparing to leave home. Though there are certainly joys that come with having a young adult around the house, they can’t cancel out the parting tensions that many families face.

Parents sometimes warn one another about teenagers who feel compelled to soil the nest before flying off to college or other adventures. Home life can become so unpleasant that those who once dreaded their graduate’s departure can’t wait to pack his or her bags. There’s a hidden function to this friction: It’s easier to part from people whose company we can hardly stand.

But subtler dynamics can also be at work. Firm plans for moving out may heighten a teenager’s tendency, which the psychoanalyst Anna Freud observed in 1958, to live “in the home in the attitude of a boarder.” With one foot out the door, a teenager may treat his parents like meddlesome landlords if they should ask what time he will be coming home, or suggest that he drive younger siblings to soccer. And just when new grads are resisting rules and expectations that held sway only a few weeks ago, their folks are often itching to offer some last-minute guidance.

Parents who want to discuss sexual ethics, finances, the hazards of heavy drinking or even the importance of getting enough sleep rarely find an eager audience in teenagers who have already decamped psychologically. These moments may be easier to navigate if we consider why adolescents act like tenants in the first place. It’s a huge developmental step to leave home, a step that teenagers don’t take all at once. Tweens usually begin the slow process of departing by closing their bedroom doors to do the exact same things they used to do with their doors wide open. In their last weeks around the house, adolescents travel the final stretch of this path. They practice living on their own while still enjoying, if they’re lucky, the safety and support of a loving home.

We shouldn’t give up on talking with teenagers about how they will care for themselves and treat others once they move out. But we should set aside the expectation of lengthy heart-to-heart talks. When teenagers are broadcasting their detachment, the most successful conversations may be the ones that begin, “It might seem like we’ve already covered this, but there are just a few things I want to touch base about before you go. I promise to keep it short.”

When soon-to-depart teenagers aren’t rubbing family members the wrong way or holed up in their rooms, they’re often nowhere to be found. Feeling confident in their ties to their parents, adolescents cling to their friends. Or they immerse themselves in efforts to resolve a meaningful high school romance. My years of working with teenagers have taught me that a surprising number of recent grads find themselves in pop-up entanglements that bloom, out of nowhere, in late summer.

Parents who are trying to cherish a teenager’s last days under their roof may be reluctant to split time with high school friends or a serious romantic partner, much less with a passing fling. But adults don’t need to take a teenager’s consuming social life as a personal rejection. The intense focus on peer relationships is often connected to the psychological strain of parting with family. A teenager who preoccupies himself with saying goodbye to his friends often manages to distract himself from difficult feelings about leaving his family. Agonizing about the future of an obviously doomed 11th-hour relationship beats tuning in to the full sadness of moving away from a beloved sibling.

It’s no picnic to send a teenager into the world. Most parents feel both wistful about the past and anxious (and perhaps even a bit envious) about their adolescent’s future. Must we add feeling at odds with or ignored by our teenagers to this emotional stew? Perhaps we could simply discuss these common post-grad dynamics with our adolescents, then go on to enjoy our last summer together.

We could. But we probably shouldn’t.

With their parting maneuvers, young people are subconsciously tempering the emotionally intense, landmark moment of leaving home. In moving out, teenagers give up almost everything they have ever known, with little grasp of what they are getting. It’s no surprise that they rely on adaptive, if sometimes off-putting, psychological defenses to buffer such a stressful transition.

As for the adults, there may be some comfort in knowing that high school graduation isn’t the end of parenting. It simply marks the next phase of it: the one where we bear with our teenagers as they find their way to the door.