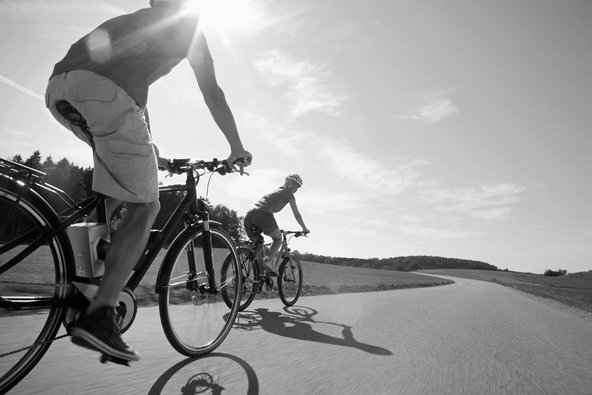 In the Tour de France, equipping your bike with a small electric motor is called mechanical doping, and is considered cheating. But for the rest of us, an electrified bicycle might be a way to make exercise both tolerable and practical, according to an encouraging new study of bicycle commuting.

Exercise is necessary in our lives, as we all know by now. People who are physically active are much less likely than sedentary people to develop heart disease, diabetes, cancer, stroke, depression, disabilities in old age, or to die prematurely.

But statistics show that, despite its benefits, a majority of us never exercise. When researchers ask why, most people offer the same two excuses — they don’t have time to fit exercise into their lives or they aren’t fit enough to undertake exercise.

Potentially, electric bicycles could address those concerns. Their motors shore up your pedaling as needed—or, with some electric bikes, do the pedaling for you—making climbing hills or riding for long distances less taxing and daunting than the same ride on a standard bicycle.

In the process, they could make cycling a palatable alternative to commuting by car, allowing people with jammed daily schedules to work out while getting to work.

But the value of electric bicycles has so far been mostly notional. Few of us have seen, let alone ridden, an electric bike and there is scant scientific evidence supporting—or refuting—the potential health benefits of using the machines.

So for the new experiment, which was published last month in the European Journal of Applied Physiology, researchers at the University of Colorado, Boulder, decided to see what would happen if they gave a group of out-of-shape men and women zippy electric bikes and suggested that they begin riding to work.

Notably, the researchers only studied motorized bikes that assist the rider rather than doing all the work for them, like a moped. They used electric bikes that require the rider to pedal in order to receive assistance from the motor.

The researchers wanted to determine whether these bikes — even with the added assistance of a motor — would provide a meaningful workout for people who previously had not been exercising much. They also wanted to see whether such bikes were fundamentally safe, given that they enable even novice riders to achieve speeds of 20 miles per hour or higher. (The Boulder city government partially funded the study as part of an assessment of whether to allow electric bikes on municipal bike paths. Additional funding came from local bike shops and Skratch Labs, a sports nutrition company in Boulder.)

The researchers first brought their 20 sedentary volunteers into the lab to check their body composition, aerobic fitness, blood sugar control, blood pressure and cholesterol profiles. Then they provided each with an electric bicycle, heart rate monitor, GPS device, instructions on the use of all of this equipment, and asked each volunteer to don the monitors and ride his or her new bike to and from work at least three times a week for the next month, spending at least 40 minutes in the saddle on those days.

The volunteers were directed to choose whatever speed and effort felt comfortable for them.

Then the researchers loosed the novice riders onto Boulder’s roads and bike paths.

A month later, the volunteers returned to the lab to repeat the original tests and turn over heart rate and GPS data. All of them had ridden at least the prescribed minimum of 40 minutes three times per week and in fact, according to their monitor data, most had ridden more than required, several about 50 percent more.

The riders also had ridden with some intensity. Their heart rates averaged about 75 percent of each person’s maximum, meaning that even with the motor assist, they were getting a moderate workout, comparable to brisk walking or an easy jog.

But thankfully none had crashed and hurt themselves (or anyone else). In fact, “we found that participants rode at a reasonable average speed of about 12 miles per hour,” said James Peterman, a graduate student at U.C. Boulder who led the study.

Perhaps most important, the riders were healthier and more fit now, with significantly greater aerobic fitness, better blood sugar control, and, as a group, a trend toward less body fat.

They also reported finding the riding to “be a blast,” said William Byrnes, the study’s senior author and director of the university’s Applied Exercise Science Laboratory. “It’s exercise that is fun.”

Several participants have bought electric bikes since the study ended, he said. He also rides an electric bike to and from campus.

Electric bikes are unlikely to be a solution for everyone who is pressed for time or reluctant to exercise, though. The bikes are pricey, typically retailing for thousands of dollars.

They also offer less of a workout than non-motorized bicycles. Mr. Peterman, an accomplished bike racer who placed fifth in the time trial at the United States National Cycling Championships last week admits that motorized bicycles are unlikely to goose the fitness of well-trained athletes.

But for the many other people who currently do not exercise or have never considered bike commuting, there is much to be said for knowing that, if needed, you can get a little help pedaling up that next hill.