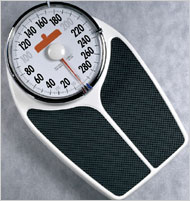 Tipping the scales this holiday season?

Reports of your holiday weight gain have been greatly exaggerated. Media stories often suggest that the average person gains 7 to 10 pounds between Thanksgiving and Christmas. And in surveys, people say they gain, on average, about five pounds this time of year.

But several studies now show that the average weight gain during the winter holidays is just one pound.

The news isn’t all good. Most people don’t ever lose the pound of weight they put on during the holidays, according to a report in The New England Journal of Medicine. Since the average weight gain during adulthood is about one to two pounds a year, that means much of midlife weight gain can be explained by holiday eating.

And we start packing on that extra pound of holiday weight early in life. Researchers at the University of Oklahoma studied holiday weight gain among college students during the Thanksgiving break. The students were weighed the day before Thanksgiving, then weighed again about two weeks later. The average weight gain for the 94 students was about one pound. Students who were of normal weight gained about a half a pound during the period. Students who were overweight, meaning their body mass index was 25 or more, gained about two pounds.

Holly Hull, the lead researcher on the Oklahoma study, says Thanksgiving marks the beginning of a “high risk” time for the overweight. “I think the number of people who only overeat at the Thanksgiving meal is slim to none,” said Dr. Hull. “The holiday season doesn’t represent one day of overeating. You have this period that extends through the new year where there’s more alcohol, more snacks, more finger foods and appetizers that are energy dense.”