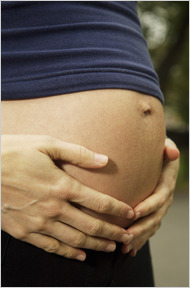 Internet advertisements and parenting Web sites often advise pregnant women to use a fetal heart monitor at home and be reassured by listening to their baby’s heart beat.

“Share the joy of pregnancy and peace of mind of knowing your baby is safe,” the Belly Beats Web site says. The site Heartbeats at Home claims its fetal heart monitors are “simply the best way to gain the assurance and peace of mind every pregnant women desires, especially during a high-risk pregnancy.”

But now British doctors are warning parents-to-be that the home heart monitors can give a false sense of security and lead to delays in medical treatment. In a commentary published today at BMJ.com, Dr. Abhijoy Chakladar and Dr. Hazel Adams, both of the Princess Royal Hospital in Britain, tell the tragic story of a pregnant woman who used a home heart monitor to reassure herself that her baby was fine.

The 34-year-old woman was nearly full-term with her first baby and had experienced a healthy and uneventful 38 weeks of pregnancy. On a Friday, she noticed that the baby wasn’t moving. She used a home fetal heartbeat monitor, and after hearing what she believed to be her baby’s heartbeat, was reassured that nothing was wrong. When she finally visited the doctor on Monday, an ultrasound scan showed the baby had died.

Dr. Chakladar said there was no way to know if the baby’s death could have been prevented, but the fetal heart monitor gave false reassurance and delayed the woman from seeking medical attention. It is difficult for an inexperienced person to distinguish between a baby’s heartbeat and the whooshing sounds of a mother’s own pulse or blood flow. And even when parents do find the fetal heartbeat, there is no way for them to know whether the baby is well or in distress.

“This is something that comes only with experience,” Dr. Chakladar said in an e-mail message. “In hospital, fetal health is assessed by experienced midwives and doctors who take a team approach.”

Dr. Chakladar notes that parents are not at fault and that there is nothing wrong with listening to a baby’s heartbeat. He said the devices should, however, never be used for reassurance. If a mother is concerned and feels she needs reassurance, she should immediately consult her doctor.

“On their own, these monitors are harmless; it is their improper use by parents to reassure themselves which can be dangerous,” Dr. Chakladar said. “These monitors can be great fun, and I would personally buy one. However, they are dangerous if they are used by untrained people as an alternative to seeking medical advice.”