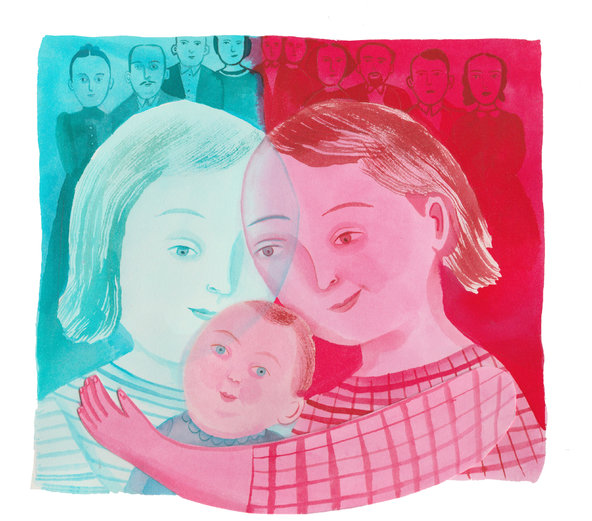 The ability to fuse bloodlines by conceiving a child with someone you love has taken on a disproportionate power and poetic meaning in my life because, as a lesbian, it’s something I’ll never be able to do.

So when my wife, Sabrina, and I began our baby-making process, combing through donor profiles on the Sperm Bank of California’s website, I was heavy with the thought that my child and I would not be biologically linked, and that, perhaps, the male source of half of our baby’s genes would loom larger than me.

How much, I wondered, would her father’s absence define her? How much space would he occupy in her mind? In what ways would he show up in her mannerisms, interests or personality? I wondered, too, if Sabrina’s bond with our baby would be deeper, stronger and truer than mine because of their biological connection.

The common perception that Sabrina, the gestational parent, is the “real” mom of our daughter, Marty, while I’m an unclassifiable “other” feeds my insecurities. For example, the owner of our daughter’s day care refers only to Sabrina as the “mommy,” and had even taken to calling himself Marty’s “daddy” when we’d hand her over to him in the morning, until I checked him.

When Marty was born, the “congratulations” were almost always directed at Sabrina alone. She did the hard work, so I quietly sucked it up, but the truth is: I get it. The idea that identities are based in biology — a sad failure of our collective imagination — governs our thinking in so many ways. Think of the quest to find a “gay gene”; or the construction of “half sister” or “half brother,” as a way of connoting differing family relations and statuses; or Ted Cruz’s inability to understand that someone who was born with male genitalia might not actually be a man.

Hit shows like TLC’s “Who Do You Think You Are?” and PBS’s “Finding Your Roots,” or popular genetic tests that trace biological lineage (AncestryDNA, 23andMe, Family Tree DNA) also attest to our preoccupation with blood ties. And I admit: I’m quick to claim my Greek-Italian heritage to justify my hot temper.

It’s fascinating to consider that if one person in your genetic history didn’t exist or made a different choice, you would not be here, nor would all the people who extend from you. If my father, a Buenos Aires-born Argentine, didn’t move to North Hollywood when he was 19 and go on a quest to find his religion, he wouldn’t have ended up at the Greek Orthodox Church where he met my mother in 1970. I wouldn’t be here. Nor would my brother, Nick, or his sons, my nephews, Jake and Chase.

“And neither would Marty,” Sabrina says. It’s early Mother’s Day morning and we’re sharing the near misses in our own books of genesis, like when her mother stood her father up for their first date, claiming she was too sick to see him via a note she left with her doorman. He chose to believe that lie and pursued her with a tenacity that wore down her resistance: They married and had Sabrina and her sister, Sophia. And then Sophia’s children, our nieces, Del and Nia, arrived and most recently, Marty.

It’s true: If Sabrina and I hadn’t met and fallen in love, and agreed on the donor we chose, Marty wouldn’t be here. In that sense, I am part of Marty’s family tree, and the love between Sabrina and me did give her life. That gives me comfort amid all the questions that swirl around her lineage, which seem to erase me: Who’s the mother? How did you pick your donor? Will she ever get to meet her father?

Eleven months into Marty’s first year, I continue to forget that she and I don’t share blood: I’ll hear her raspy voice and think, “She inherited my mom’s man-voice!” Or, she’ll be forcefully willful and I’ll think: It’s that hot Mediterranean blood!

She feels so much a part of me that I don’t see the spaces between us. Her complete dependence on me blurs the lines that mark where she begins and I end: I am her legs when she wants to walk, her arms when she wants to reach high, her hands when she wants to grab something too big for her grasp. My love for her seems to soar to new heights all the time, and while I feel twinges of jealousy toward the bio-bond our donor shares with her, my gratitude to him trumps my envy by far. It’s odd to carry so much emotion for a person you’ve never met.

When I confess to Sabrina that I hate that Marty might feel left out of the many ways that fathers figure into our cultural consciousness, she says, “You can’t miss something you never had to begin with.” But I’m not sure that’s true: The mother-father dyad is too large a construct for Marty to be unaffected by its absence in her life. I can’t know in advance how her bio-dad will figure into her psychology or if he will at all.

It seems natural to want to know from whom you spring, which is why we picked a donor in the Identity-Release Program: When Marty turns 18, she can track him down and ask him all the questions neither Sabrina nor I will be able to answer.

But when she’s old enough to understand, we will be able to share the story of her origins: It started with two girls who fell in love.

Stephanie Fairyington is a New York City-based journalist who writes on gender and sexuality. Follow her on Twitter @Fairyington1.